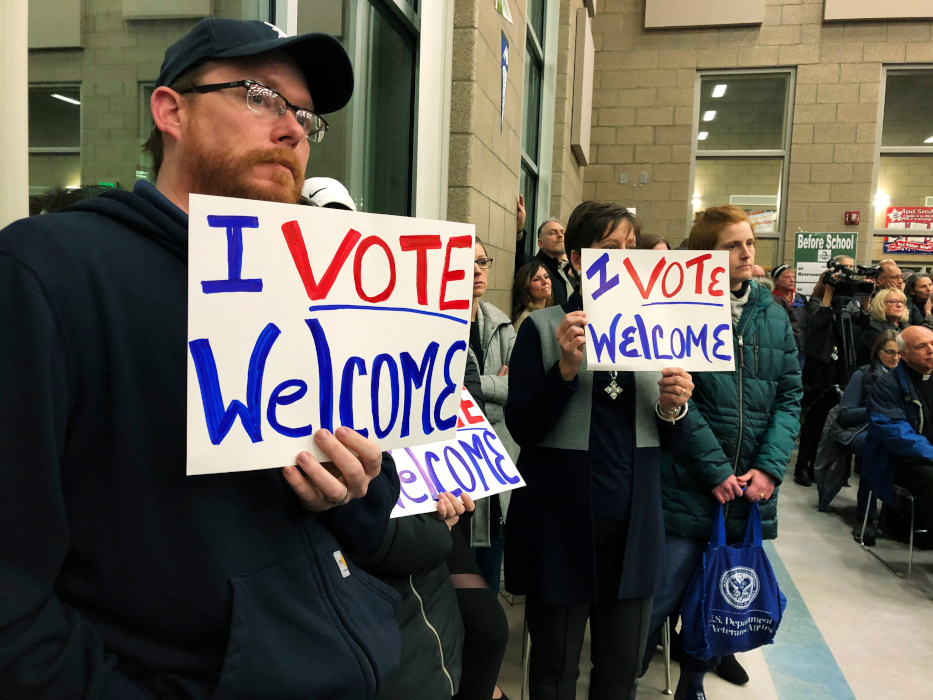 Residents in support of continued refugee resettlement hold signs at a meeting in Bismarck, N.D., Monday Dec. 9. 2019. Several church leaders are urging Burleigh County not to be the nation's first to refuse new refugees since President Donald Trump ordered that states and counties should have the power to do so. (AP/James MacPherson)

A federal judge in Maryland heard arguments Jan. 8 in a lawsuit by three faith-based organizations against the U.S. government over a recent executive order allowing state and local officials to block refugee resettlement.

The organizations also have asked for an injunction to temporarily stop the order requiring state and local officials to give written consent in advance for refugees to be resettled in their jurisdictions — even as most states already have agreed to admit refugees.

A ruling on that request is expected by Jan. 17, according to LIRS.

"In the last few weeks it's been really heartening to see that a positive, unintended consequence of the illegal executive order is that states and communities have almost universally stood up and welcomed the stranger," said Krish O'Mara Vignarajah, president and CEO of Lutheran Immigration and Refugee Service.

"As a faith-based organization, we are so inspired to see communities across the country mobilizing around the biblical mandate to welcome the stranger."

Vignarajah said afterward she also was encouraged by Judge Peter J. Messitte's questions during the hearing.

"It was very clear that he had spent some time in advance of the hearing today giving this thoughtful, but also a kind of expeditious consideration, and we're really grateful because what hangs in the balance is the lives of the most vulnerable communities," she said.

The lawsuit is a first for Church World Service, noted Jen Smyers, director of policy and advocacy for CWS' immigration and refugee program. It may not be the last.

"Litigation is something new for us, but probably something that we will have to continue to resort to if the administration insists on continuing to dismantle the refugee resettlement program," Smyers said.

So far, at least 40 governors and 85 mayors, city councils and counties have given written consent for refugees to be resettled in their jurisdictions, by LIRS' count.

CWS has offices in three states — Texas, Florida and Georgia — that have not yet agreed in writing, Smyers said, though she is hopeful they will.

North Dakota's Burleigh County made headlines last month when its county commission narrowly voted to admit up to 25 refugees after signaling it would be the first to ban them under Trump's executive order. The county had received 24 refugees in the previous fiscal year.

Meantime, Minnesota's Beltrami County voted this week not to give its consent, making it the first county board in Minnesota and one of few nationwide to shut out refugees. The vote was largely symbolic, as no refugees have settled in the county for at least five years, according to the Star Tribune.

Faith-based organizations have characterized Trump's executive order as " yet another refugee ban " and an attempt to dismantle the country's decades-old refugee resettlement infrastructure.

That infrastructure relies heavily on religious groups: Six of the nine organizations that partner with the federal government to help resettle refugees are faith-based, including HIAS, CWS and LIRS.

Those groups have been forced to lay off staff and close offices as the Trump administration has drastically cut the number of refugees allowed in the country each year. This year, the president set that limit at just 18,000 refugees — a historic low — compared with 110,000 during Barack Obama's last year in office.