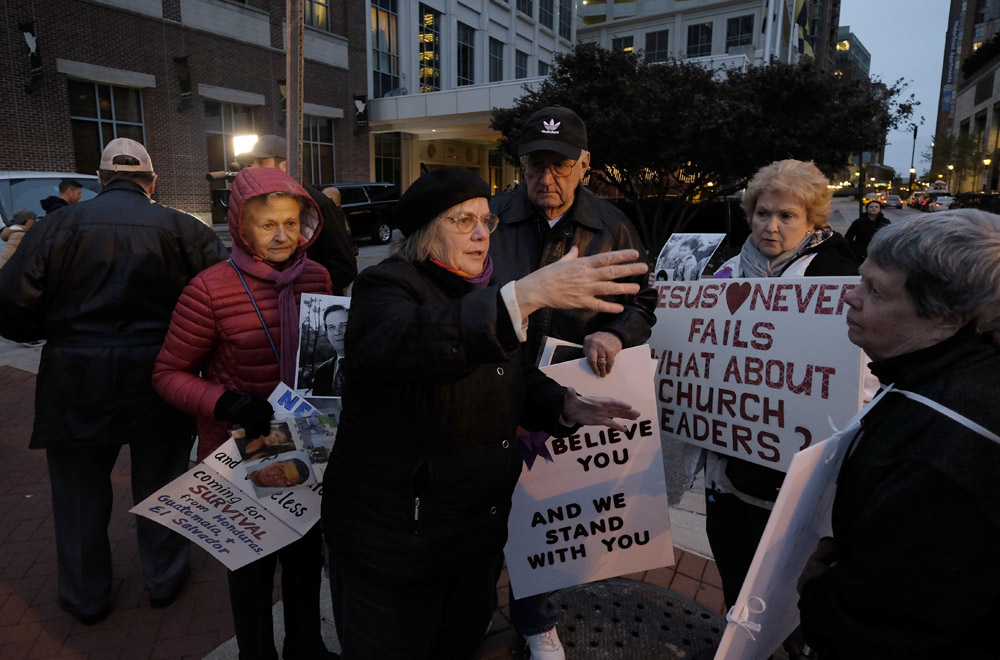 Protesters gather outside of the hotel in Baltimore where the U.S. Conference of Catholic Bishops was meeting during its fall general assembly. (CNS/Rick Musacchio, Tennessee Register)

In the Catholic universe, time doesn't provide any barriers from the ongoing fallout from the sex abuse scandal. Perhaps time will eventually bring healing, but in this moment the crisis slides from the year gone by to the next, seemingly gaining momentum by the month as bishops finally open the files and provide lists of abusers. It's only taken 33 years. The moves are not a sign that the episcopacy suddenly became aware of how utterly corrupt its culture had become. They are more a measure of how great the pressure from the outside has become.

Most of it is old stuff, true, but old stuff newly revealed and the scope of the crime and the cover-up overwhelms. Some, like Fr. David Knight of Memphis, in responding to Melinda Henneberger, who's had enough and has left, say sin has always been a part of the deal, so "hang in there." But systemic (and increasingly global) cover-up of child rape and molestation by the leadership of the church?

Between those poles, some newly outraged have decided to stay and fight and one of the high-profile Catholics in that endeavor is Timothy Roemer, who served as a Democrat in Congress from Indiana's 3rd District (1991-2003) and as ambassador to India (2009-2011).

Recently he had a column published in USA Today which he begins by describing the scene in August where, after a homily he heard at St. Thomas à Becket Catholic Church in Reston, Virginia, he shouted, "Justice in the name of Christ. Justice for our children."

That justice, he believes, demands action of the people in the pews who should "suspend institutional giving" and send funds instead to such groups as Catholic Charities, Catholic Relief Services and other local agencies serving the poor and marginalized.

Laity should also demand that bishops send all records relating to sex abuse to state attorneys general, he said, and be involved in clergy assignments where the safety of children is in question.

"What pushed me to write the piece was my faith in God colliding with the inaction and the negligence of the church," he told me in a recent phone conversation. "I've never seen in my lifetime the amount of percolating anger and frustration from practicing Catholics every Sunday going to church now feeling as though they have been gutted."

He ticked off a list of family and friends, neighbors who have simply gone elsewhere or gone nowhere else, but have left. "In order to do something with the amount of anger and frustration and betrayal, the laity has to step up and get involved and redirect resources, and the church, especially the American church, must listen and act. Both these things can happen."

Exactly how, no one knows, not even Roemer. Accountability and change of culture is difficult in any circumstance, but especially difficult where there's no precedent and no obvious path.

He believes bishops "have to vote on a resolution condemning past abuse, sending a strong message to the Vatican that the status quo is not tolerated any longer."

Second, the already tried "commissions and pronouncements won't do." What's needed, he said, are laity involved to provide "dual oversight" at the parish level, particularly in instances where priests are being transferred.

Finally, he said we need bishops willing to "disagree with the church occasionally and willing to stake their reputations and lives on moving in the direction that sustains faith in the church and love of the church."

Roemer's comments gather in the sentiments of a wide and growing segment of the church. At least two cautions present immediately. We know, given the aggressiveness of extremely conservative Catholics, especially those with enormous sums of money at their disposal, that the lay cure to the church's ills could be as bad as the malady itself — that is, a reinforcement of a culture that's at the heart of the problem. On another side of the issue (there are more than two sides to this) allowing the degree of scrutiny and accessibility necessary to deal with the roots of the scandal would require a degree of humility and conversion on the part of the U.S. episcopacy that so far has been nowhere evident.

In the space that's been created, however, we hope Roemer's voice in coming months grows into a chorus and that his call for lay activism begins to move some of the pieces on the ecclesial landscape.

There is no more compelling issue to consider as we move through the doorway of 2018 — a year of distractions and chaos in both civil society and the community called Catholic — than Earth itself.

The unvarnished reality is that all the other noise — the broken political system in the wider culture, the dysfunctional hierarchical system within the church — is secondary. We're guilty as the next of being easily distracted. The intrigue of both civil and religious politics and the sheer volume of the noise is impossible to ignore.

But we've chosen to focus, as we move to a new year, on not only the increasingly obvious peril, but also on those determined to confront it. The church, despite all its other troubles, is in the thick of it, as Brian Roewe's report from the recent COP24 Conference in Poland demonstrates.

Benedictine Sr. Joan Chittister was also there and, considering both the science in hand and those who won't be deterred by the deniers, urges us to "stop again to examine our core values, our sense of what it means to be fully human, our attitudes about what makes for a full life, a happy life, a moral life."