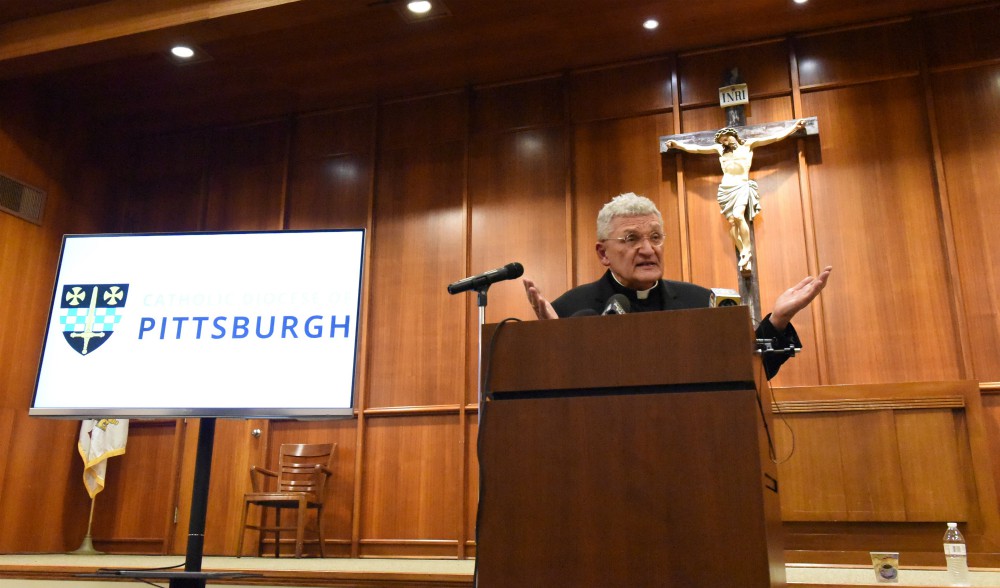 Bishop David A. Zubik of Pittsburgh addresses the media Aug. 14 at the pastoral center in Pittsburgh after the Pennsylvania attorney general released a grand jury report on a months-long investigation into abuse claims spanning a 70-year period in the Diocese of Pittsburgh and five other Pennsylvania dioceses. (CNS photo/Chuck Austin, Pittsburgh Catholic)

Despite my obsession with President Trump, the Pennsylvania grand jury report cries out for comment. The report conservatively tells us that 300 priests were involved in the sexual abuse of at least 1000 kids. Of course, we are not surprised — we've seen this movie before. We know about Boston. We know a bit about Ireland. We need to acknowledge that if an in-depth investigation has uncovered such activity in Pennsylvania, there is no reason to believe that the same kind of data would not be uncovered in Chicago, Los Angeles, Atlanta or any other area of the country. There is some talk that Attorney General Brian Frosh in Maryland is being asked to conduct such an investigation.

The first thing the church must do is accept the reality that there is a problem. Yet bishops and clergy are still attempting to say that the problem was in the past and everything is OK now. Greg Burke, Vatican spokesman, notes that most incidents occurred prior to 2002. Bishop David Zubik of Pittsburgh says: "The Diocese of Pittsburgh today is not the church that is described in the grand jury report … we have learned from the past."

We all hope the church has learned from the past, and they do appear to be doing more to hold bishops accountable for being complicit in the scandal. What is needed, however, is a level of humility that is yet to be seen. Something is wrong at a fundamental level and the church cannot continue to conduct business as usual.

The church as the spotless bride of Christ needs to give way to the people of God on a journey to truth and intimacy with our Lord. Pope, bishop, priests and laity are all on that journey together, and there is no hierarchy before God. The exercise of authority in the church today must be done gingerly and together with consensus building throughout every level of the people of God.

Confession is a case in point. The expectation that a Catholic should walk into a confessional and confess personal sins to a priest in view of the current status of priesthood is the height of arrogance. The power that the church claims to forgive sins should be made available to all people, not held onto to retain control over its flock. General absolution should minimally be made available at Christmas and Easter time.

Jesus forgave out of his love and mercy. An acknowledgement and awareness of sin at a carefully prepared communal penance service emphasizes our collective guilt. No requirement should be needed to enumerate personal failings to seek forgiveness. People who do go to individual confession should go because they feel the need to share what they have done at a particular moment in their lives, and they feel comfortable seeking forgiveness from an individual priest.

There is movement in holding bishops accountable for their actions in a way that has not been done before and that is a good thing. But the notion that the church can continue to operate as it has in the past is becoming tiresome. There is no willingness to confront the need for dramatic change. Instead the hierarchy continues to clutch at straws. They put forth evidence that celibacy has nothing to do with the problem.

Focusing on a few select studies seems to miss the point. The culture of priesthood must change. Whatever problems celibacy does or doesn't create, a change in culture is needed. Introducing married priests and yes, women priests, will dramatically change the culture of priesthood in the church, and will decrease the likelihood of major abuse scandals. It will also invigorate and energize the church in ways that are sorely needed in a church that seems determined to remain an old boy's network. We desperately need some imagination and courage in church leadership to make things happen.

A band of dispirited and defeated disciples experienced the risen Lord and created a church that developed new ideas about the nature of God that was able to include Jesus. That same spirit that imbued this rag tag bunch of disciples still flows through the church, but the focus instead is on guarding the past rather than reaching out to a bold future. It reminds me of the man in the Gospels who buried his one talent and the master was not pleased. Consider the oft-quoted passage from Proverbs; "Where there is no vision the people perish." Too often in our church the vision has been limited to protecting the status quo. We need a church oriented to the future not one determined to hold on to the past.

The church has a band of faithful followers who have been left by the wayside to languish in the pews. It is time for them to exercise leadership in the church, and for the old men to sit back and let the spirit blow where it will. No better example of an old man who got out of the way is St. Pope John the XXIII. He chose to open the windows and let the fresh air blow in. Pope John didn't know what would happen, but he trusted in the spirit which gave us Vatican II, and which foolish and timid churchmen have been trying to take away from us ever since.