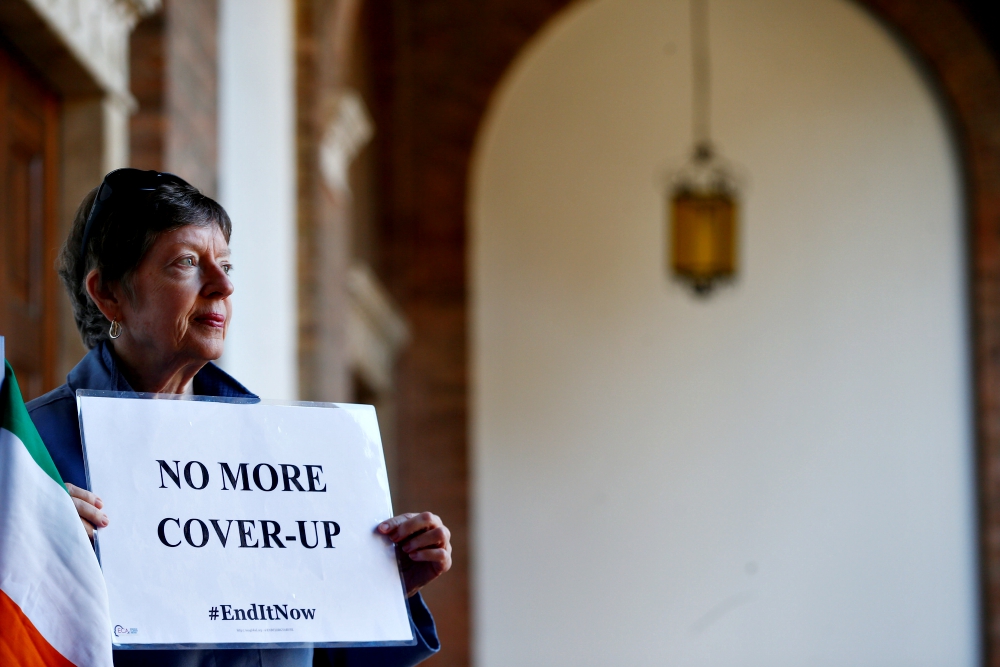 A woman demonstrates inside the headquarters of the Benedictine order in Rome Feb. 22 during a four-day meeting on the protection of minors in the church at the Vatican. (CNS/Reuters/Yara Nardi)

The much-anticipated February conference on sex abuse at the Vatican is now history. This is the conference that prevented the U.S. bishops from acting on the sex abuse crisis back in November at their meeting in Baltimore.

Was it worth it? What was accomplished? We heard the same rhetoric we have been hearing since the crisis first broke in Boston more than 15 years ago. Little in the way of concrete action came out of the discussions. They were marred by divisive speeches demonstrating just how divided our church has become. Finger-pointing and accusations often drowned out thoughtful or serious dialogue on how to address the issue that continues to bedevil the church.

It appears there are some, too many, in the hierarchy who have no real interest in resolving the crisis but just want to add fuel to the fire of dissent and conflict. It does not bode well for real progress on this issue if church leaders cannot work together to initiate appropriate steps to ameliorate the crisis.

I have noted before that it seems schism may be the only way out of the current conflict in the church — and that still seems a real possibility.

Having said that, the report and press conference coming out of the Leadership Roundtable's Catholic Partnership Summit in Washington with Cardinals Blaise Cupich and Sean O'Malley are actually an important first step. What strikes me as new and what goes beyond the rhetoric we are so used to hearing are some of the following ideas that came out of the Catholic Partnership Summit:

These concepts could provide the format to begin significant structural change in the church, which in turn could lead to meaningful reform. The notion that laypeople need to be involved in a revised theology of priesthood is pretty exciting, and a dramatic departure from clericalism. It will be important to see what the U.S. bishops' conference does with these recommendations at its next meeting.

It is clear the hierarchy of our church can no longer run our church by itself. The sooner we see power equalized in the church among all stakeholders — clergy, laity, and specific and appropriate interest groups — the sooner it will be possible to feel good about being part of this institution again.