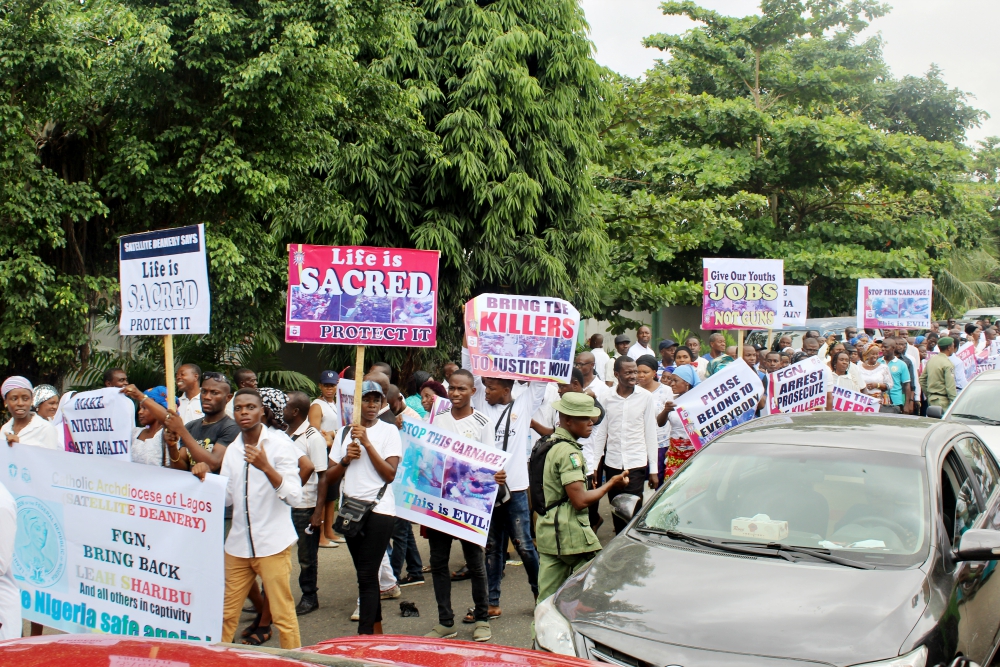 Crowds of people hoist placards, sing hymns and pray the rosary in Lagos May 22 during a peaceful and prayerful protest against recent killings in Nigeria. (Festus Iyorah)

Fr. Amos Mbachie, a Catholic priest in the Markurdi Diocese, is yet to get over the death of his two childhood friends, Fr. Joseph Gor and Fr. Felix Tyolaha, who were brutally murdered along with at least 15 parishioners by unidentified gunmen.

The priests and parishioners had gathered April 24 at 5 a.m. in St. Ignatius Catholic Church in Mbalom, a community in the Middle Belt region of Nigeria, to celebrate morning Mass — a daily routine in this agrarian community. But that morning, a group of gunmen, thought to be herdsmen, rushed into the church shooting at everyone in sight, including the two priests celebrating the Mass. As the gunfire subsided, some 15 parishioners and the priests lay dead.

"The worst thing any human being can do is to shoot at a revered father celebrating Mass in their garments, cassock and chasuble," Mbachie said, his voice heavy with anger. "How else can we say we're getting back to barbarism?"

"I think it's the most heinous, criminal, wicked despicable act that anybody who has blood flowing in his or her veins can contemplate."

Mbachie is still reeling from the traumatic experience. He has vivid memories of the times he shared with his friends during their seminary days.

"Oh, [they were] wonderful people," he said. "Fr. Joseph Gor, very hilarious, hardworking and committed to his local community. Father Felix was a prayerful man. These are lovely people who would ordinarily not look for people's trouble."

Both were still young, barely five years into the priesthood. Mbalom is a village with no shopping mall, restaurants or commercial banks. Gor, a charismatic and popular preacher, bought a television and satellite dish, installed them in his compound and invited villagers to watch football matches in an atmosphere of camaraderie. He chatted and guffawed with them — even though sometimes he was bogged down by fear of the unknown or of herdsmen moving freely in Mbalom.

"Living in fear. The Fulanis are still around us here in Mbalom," Gor posted to his Facebook page in January. "They refuse to go. They still go grazing around us. No weapons to defend ourselves."

The Fulani are nomadic herdsman dispersed across Sahel and West Africa region. In Nigeria, desertification in the arid Northern Region has pushed the herdsmen southward in search of pasture for their cattle; they found that pasture around the Benue River in Benue, a state that has largely been used for cultivation and is known as the food basket of the nation.

Since 2012, Benue has been embroiled in bloody conflict between the herdsmen and farmers over water and land. The conflict, however, has taken on a sectarian tone because the Fulani are mostly Muslim and the farmers mostly Christian.

Thousands, mostly farmers, have been killed by these nomadic herdsmen. According to 2017 Global Terrorism Index of the Institute for Economics & Peace, Fulani extremists killed more than 2,500 people in Nigeria between 2012 and 2016. None of the herders has been arrested and no security agencies have been deployed to the state to protect lives and property, Nigerian legislators say.

The situation took a downturn when Benue state outlawed open grazing in November 2017. The Fulani saw the laws as a threat to their way of life, and the killings of citizens have not stopped. In January, a mass burial was held for 72 people killed by herdsmen on New Year's Eve.

The Catholic bishops in Nigeria, never afraid to hold public officials accountable, have been pressuring the government to find a solution. The Catholic Bishop's Conference of Nigeria used the bishops' annual meeting with the president, Muhammadu Buhari, to express their displeasure over the killings of all Nigerians, not just Catholic Nigerians.

After the April killings of the two priests and the parishioners, the bishops challenged the president again in a statement that talked of their "deep shock, sorrow and utter horror." 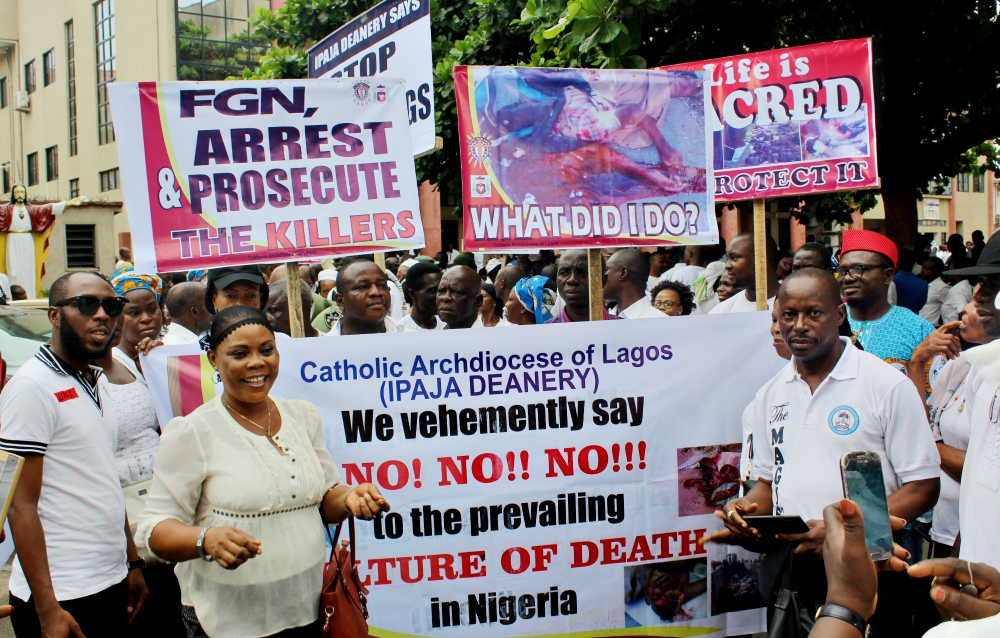 In Lagos, 15 deaneries and about 300 parishes brought placards to the May 22 protest against recent killings in Nigeria. (Festus Iyorah)

"If the President cannot keep our country safe, then he automatically loses the trust of the citizens. He should no longer continue to preside over the killing fields and mass graveyard that our country has become," the bishops wrote.

In late May, the bishops appealed to all dioceses across Nigeria to embark on a "solemn peaceful and prayerful demonstration against the killings in Nigeria."

Archbishop Alfred Adewale Martins of Lagos called on all the Catholics in the 180 parishes of his archdiocese to gather May 22 at St. Leo's Catholic Church in Ikeja, known as Nigeria's commercial capital, for a requiem Mass and then a peaceful and prayerful procession from the church to the state governor's office, where the bishop would address the governor.

Thousands answered Martins' call. The Mass was scheduled for 10 a.m., but crowds of parishioners came earlier and the church's 6,000-seat capacity was soon filled. Hundreds had to make do outside the church, taking up spots in the Marian grotto, the church's medical center and in front of the parish house.

Even as people struggled to clear security checkpoints at the church entrance, Martins and more than 250 priests all draped in milky chasubles slowly processed into the church to start Mass.

"Before the priests and parishioners were killed, similar events had occurred but no one had been convicted for these murders," the archbishop said in his homily. "We are gathered here today not only as Catholics but Nigerians to register our displeasure over these killings. We don't have enough security personnel to guard lives and property. Something must be done!" 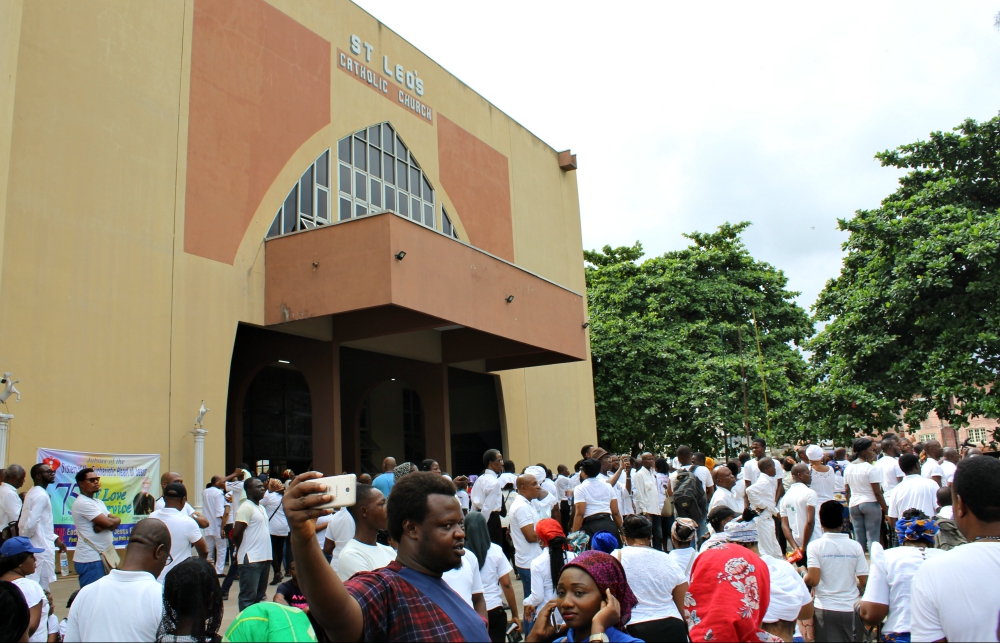 Scores of Catholics stayed outside during the requiem Mass May 22 at St. Leo's Catholic Church in Ikeja, Nigeria, because the 6,000 seats in the church were already taken. (Festus Iyorah)

As the archbishop thundered, chants of approval rose from the crowd.

Martin's homily spoke of pain, anger, frustration and disappointment, and he didn't spare criticism for the Nigerian government and security agencies. The archbishop, however, was quick to preach against violence as a form of retaliation. Instead, he encouraged everyone present to "look to Jesus to strengthen our faith."

After the Mass, the congregation began a peaceful and prayerful procession toward the governor's office. Catholics reciting the rosary and belting out hymns like "Ave Maria" reduced traffic in Ikeja to a snarl. From private cars and public transportation, from windows in office buildings and shops, people watched the procession's slow progress.

Some of the Catholics carried placards reading, "Bring killers to justice" and "Make Nigeria safe again"

"I hope for peace and harmony after this protest," said Frank Ejeba, a 31-year-old architect. "I hope the federal government of Nigeria listens as well."

Back in Markurdi, the capital of Benue, Mbachie expressed fleeting optimism. "If [government officials] wake up to the reality of their own actual function and calling as a government then they will be able to stop this whole carnage that has been ongoing," he said.

"If the government can't protect citizens, they should resign."