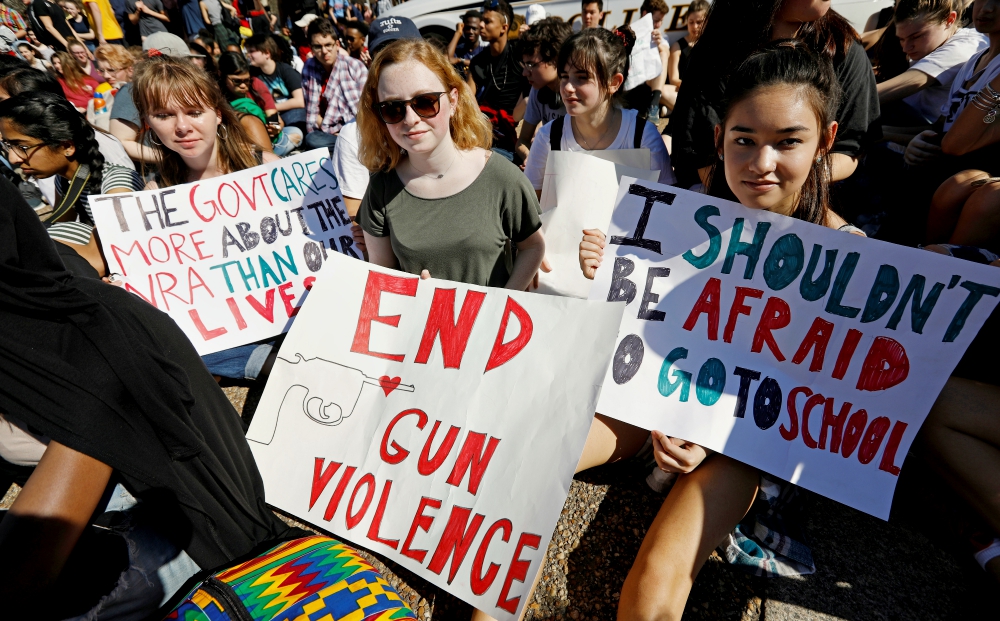 Students who walked out of classes from Montgomery County Public Schools in Maryland protest against gun violence in front of the White House Feb. 21 in Washington. (CNS/Reuters/Kevin Lamarque)

Since the beginning of the 115th Congress in January 2017, there have been 10 public mass shootings in the United States, according to data compiled by The Washington Post, most recently the Feb. 14 massacre of 17 people by a former student at Marjory Stoneman Douglas High School in Parkland, Florida. In that time, lawmakers in Washington have introduced more than 150 bills relating to firearms and explosives, according to GovTrack.us, a nonpartisan legislation tracking site.

Of those, just three so far have been signed by President Donald Trump. Two dealt with military and defense funding, while a third nullified a lame-duck rule issued by the Obama administration that aimed to limit access to guns for people with mental illnesses.

The bulk of gun control measures have not garnered majority support in either the House of Representatives or the Senate, with both chambers controlled by Republicans. On the other hand, several gun rights bills have passed in the House.

One such bill is HR 38, the Concealed Carry Reciprocity Act of 2017, which advanced to the Senate in December after a 231-198 vote, with 225 Republicans in support. It would permit a person with a concealed carry permit in their home state to carry weapons into other states and onto federal lands, including national parks and national monuments.

According to GovTrack, HR 38 was the first gun-related bill passed in Congress since the mass shootings at a Las Vegas country music festival in October 2017 and at the First Baptist Church in Sutherland Springs, Texas, in November 2017.

Sen. John Cornyn (R-Texas), who sponsored the Senate's version of the concealed carry bill, also introduced bipartisan legislation to strengthen background checks in the wake of the Sutherland Springs massacre, where a gunman killed 27 people and injured 20 others during a Sunday morning church service Nov. 5.

The Fix NICS Act would fill gaps in the National Instant Criminal Background Check System by providing incentives for states to improve their reporting to the system, and penalizing federal agencies that fail to report relevant records.

The bill's 45 co-sponsors break evenly along party lines, and include both Senate Majority Leader Mitch McConnell and Minority Leader Chuck Schumer. The National Rifle Association has also expressed its support of the Fix NICS Act.

In a press release, Sen. Chris Murphy (D-Connecticut) called the bill "the strongest update to the background checks system in a decade, and provides the foundation for more compromise [on the issue of guns] in the future."

So far, the Senate has not voted on the bill, nor has the House voted on similar legislation.

The Assault Weapons Ban of 2017 would make it illegal to import, sell, manufacture, transfer or possess a semiautomatic assault weapon or a large-capacity ammunition-feeding device. The bill permits ownership of grandfathered semiautomatic weapons, with a background check by a licensed dealer required for private sales or transfers. Current law enforcement and retired officers would also be exempt.

Following the Las Vegas mass shooting, Rep. Brian Fitzpatrick (R-Pennsylvania) proposed in October legislation that would address "bump stocks," which allow a semiautomatic weapon to fire faster. The bill would treat the device like machine guns, which are heavily regulated and all but banned in the United States. A similar bill in the Senate would enact a federal ban on bump stocks. 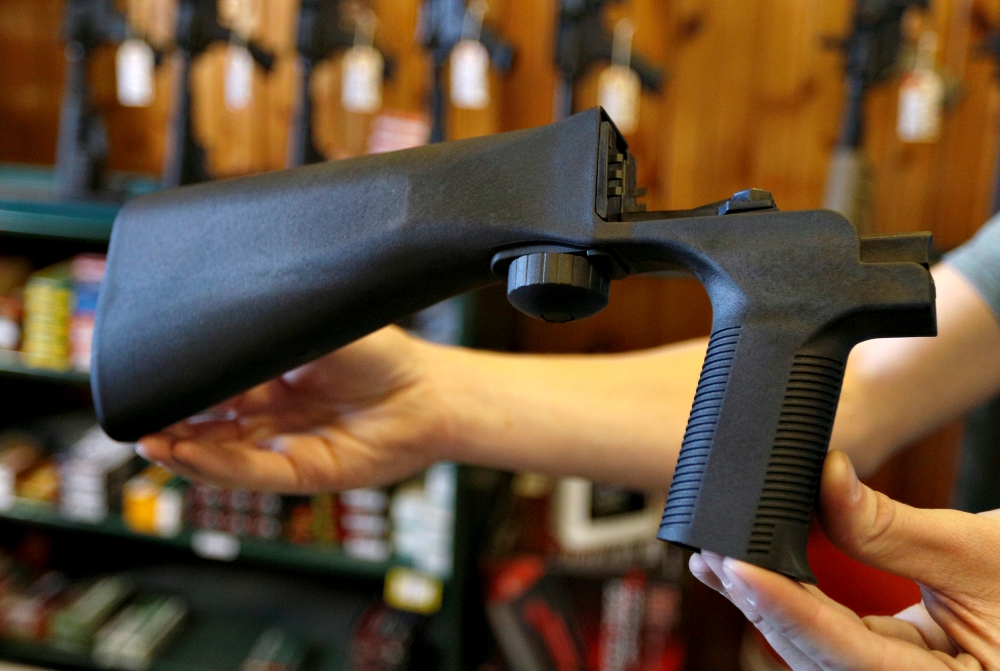 An employee at a gun shop in Orem, Utah, is seen in October 2017 holding a bump stock that attaches to a semiautomatic rifle to increase the firing rate. (CNS/Reuters/George Frey)

Another bill introduced in mid-January by Rep. Mike Bost (R-Illinois) would provide grants of up to $200,000 through the Justice Department to local education agencies to install devices that would immediately notify authorities in cases of emergency, including an armed assailant, terrorism, health issues and natural disasters.

Outside Washington, much of the gun regulation discussion has resided in Florida. On Feb. 23, Gov. Rick Scott proposed raising the purchasing age of a rifle to 21 and other measures aimed at making it more difficult for people with a history of violence to buy a gun, and increasing security in schools. Three days earlier, the Florida House voted against beginning debate on an assault rifle ban.

On Wednesday, Feb. 28, the sporting goods retailer Dick's Sporting Goods announced it would end the sale of assault-style rifles or high-capacity magazines and require a gun buyer to be 21 years old.

A rundown of other gun-related bills pending in Congress:

The bill has been assigned to the House Energy and Commerce Committee's subcommittee on health.

A similar bill in the Senate, SB 834, introduced in April 2017 by Sen. Edward Markey (D-Massachusetts) looked to appropriate funding for the Centers for Disease Control and Prevention for research on firearms safety and gun violence prevention.

The bill by the New York congressman seeks to establish a framework to define whether certain types of armor-piercing ammunition are considered for use in sporting purposes or not. It is assigned to the House Judiciary Committee's Subcommittee on Crime, Terrorism, Homeland Security and Investigations.

Earlier this year, Engel also introduced HR 4901, the Flamethrowers? Really? Act, which would institute federal regulations on flamethrowers. There are currently no regulations since the Bureau of Alcohol, Tobacco, Firearms and Explosives does not classify a flamethrower as a gun.

The bill would establish grants under the Bureau of Justice Assistance in the Justice Department for states, local governments and gun deals to implement gun buyback programs. Participants in the program would be eligible to receive a prepaid card as compensation. The bill would also bar the use of such cards in the buying and selling of firearms and ammunition.