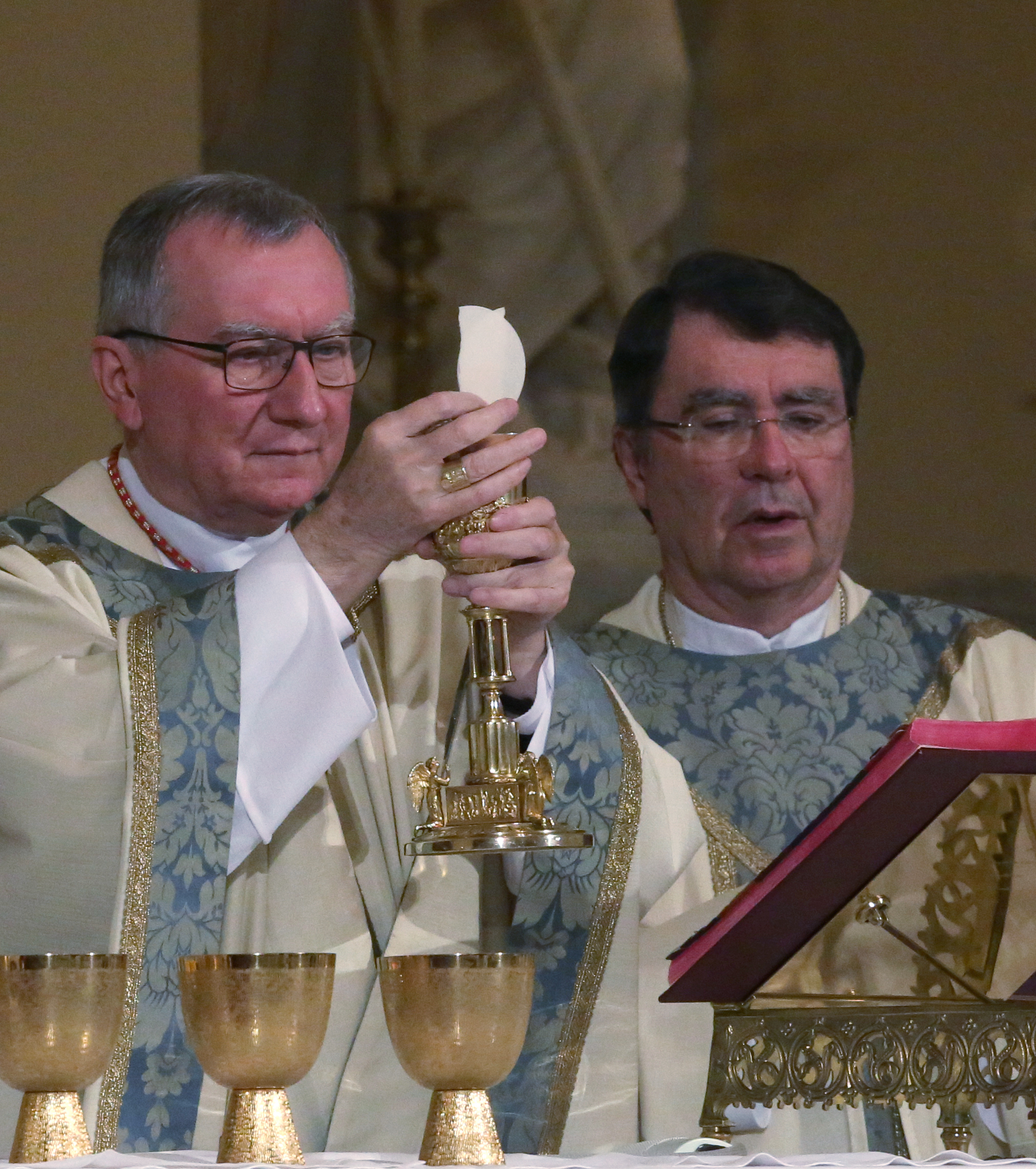 Cardinal Pietro Parolin, Vatican secretary of state, and Archbishop Christophe Pierre, apostolic nuncio to the United States, concelebrate Mass Nov. 12 at the Basilica of the National Shrine of the Assumption of the Blessed Virgin Mary in Baltimore on the eve of the fall general assembly of the U.S. Conference of Catholic Bishops. (CNS/Bob Roller)

There are three things bishops must always keep in mind as they exercise their episcopal ministry, according to Archbishop Christophe Pierre, the Vatican's nuncio to the United States: youth, the mission of evangelization and "the Lord himself."

"The Holy Father has demanded of bishops that their mission requires passion," Pierre said in an address to the U.S. bishops Nov 13, the first day of their fall general assembly in Baltimore. "We need to have the passion of young lovers and wise elders."

Pope Francis has warned that "the biggest threat of all is gluttony," Pierre added, in "which all appears to proceed normally while in reality faith is winding down."

"I ask you for passion -- the passion of evangelization -- what are we as bishops, totally be passionate about," he said. As the U.S. Conference of Catholic Bishops celebrates its centennial in 2017, the archbishop added, "I think this is a fundamental question that the illustrious past of your conference gives as Christ as the center of your life and your church."

In focusing on youth, Pierre said, "Pastors, parents and teachers know the difficulties of transmitting the faith in our day, which is not so much the nature of change as the change in age. Young people struggle not only with existential questions but practical ones, like finding work."

He noted that "50 percent of Catholics under 30 identify as 'nones' (having no religious affiliation) ... and nearly 14 million Hispanics born Catholic but raised here have become nones."

Pierre said, "Perhaps we could become discouraged. However, we are a people of hope. Our hope is basically in the Lord and the Holy Spirit. Are we passionate about our youth? If so, this means being open to accompanying them personally as spiritual fathers, even if this means demands on our time and our energy."

The USCCB Committee on Evangelization and Catechesis is beginning discussions on how best to reach out to and address the challenge of the growing numbers of people who are unaffiliated or identify as "none" when it comes to religious affiliation.

"The committee hopes to study the issue and learn more about the 'nones' so as to offer to the bishops a greater understanding of why people are leaving the church and no longer identifying with any religion. This is especially true of younger people who are leaving the church," said Archbishop Leonard Blair of Hartford, Connecticut, committee chairman, in a September report included in materials provided to the bishops for the fall meeting.

On evangelization, Pierre reminded the bishops that Francis had sent them a video message last year. In that message, "the challenge is to create a culture of encounter which encourages individuals to share the rich tradition of experience, to break down walls and build bridges," he said. "The church in America is called to come out of its comfort zone and become a leaven of communion. We need to become fully a community of disciples filled with love and enthusiasm for the spread of the Gospel."

"It was this land that gave birth to Blessed Father Stanley Rother, even in the face of martyrdom even though he gave his life for his people, even though he could have given up," Pierre said.

Casey "made time for people. He listened to the pilgrims and he touched the sick with great compassion," Pierre added. It was, he said, "this love for the Lord and his people (that caused) light to rise in darkness."

Setting the example for Catholics in their dioceses "by example of our personal relationship with Jesus" are among "the most essential activities to be carried out in our pastoral ministry," he noted. "There is always one more task to be done. There is always a risk of being functionally a manager, but Jesus calls us to a lonely place to pray. The need for silence, and contemplation cannot be greater as an antidote to the busyness of life."