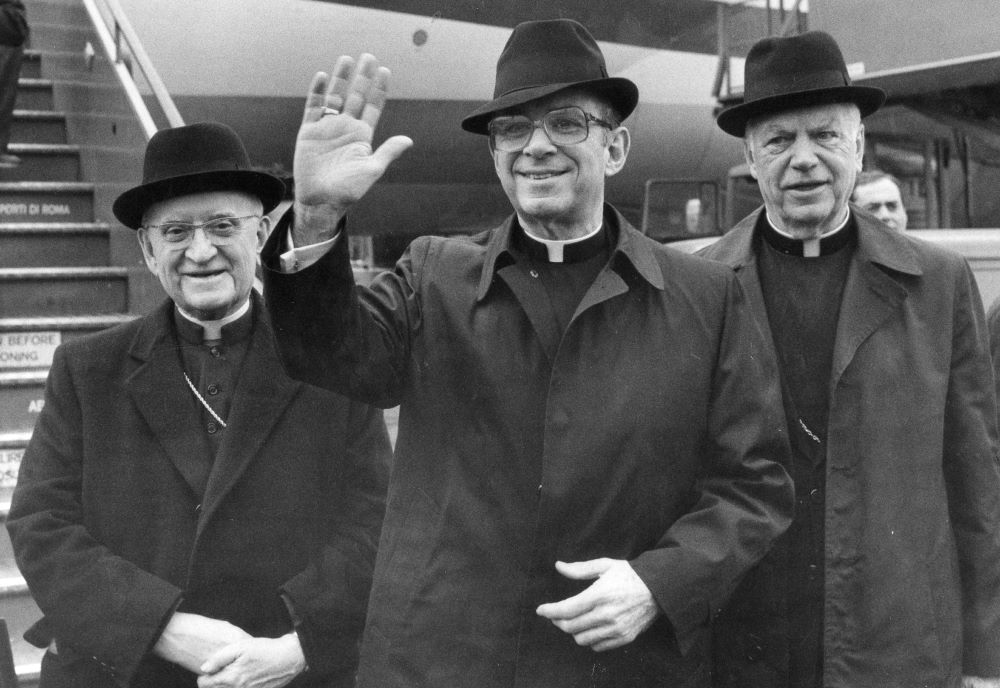 Cardinal Joseph L. Bernardin, archbishop of Chicago, waves upon arriving at Rome's Leonardo Da Vinci airport in this Jan. 30, 1983, file photo. In December 1983 he delivered a landmark lecture outlining what he called a "consistent ethic of life." He died of pancreatic cancer Nov. 14, 1996, at age 68. (AP/Massimo Sambucetti)

The first time I met Cardinal Joseph Bernardin was the night before he was installed as the 11th bishop of Chicago. All the priests of the archdiocese joined our new archbishop for evening prayer. We all followed him down the center aisle of Holy Name Cathedral. He carried the paschal candle, the light breaking the darkness of the unlit cathedral. It was very moving walking with brother priests, young and old, spry and wobbly, all following in the steps of our new archbishop, all wondering what he was going to be like.

When he introduced himself as "I am Joseph, your brother," we realized he was going to be a different kind of archbishop, someone who stood among us, someone who would walk alongside us.

Not long after his installation he visited the high school day seminary of 750 boys where I was serving as rector. He insisted on meeting each student. They lined up by year and he greeted each one, his attention focused on each student, if even for just a few seconds.

It was as if he had all the time in the world to be with you. That was characteristic of the man. He wanted to know you and what was important to you. In this age of distracted attention with people glancing frequently at their cellphones or checking emails or text messages, such focused attention is rare yet still critically important.

I remember vividly the day one of our high school students died by suicide shortly before Christmas. I was devastated and called the cardinal to let him know. I broke down. His words of comfort meant a lot. He wanted me to convey his sympathies to the family who were in such pain. He wrote me a short time afterward expressing his support and concern for me. Nothing extraordinary, nothing grand, but a common act of kindness that meant the world to me. Bernardin was attentive to the little things. When people wrote to him, he responded with a handwritten note. Personal was characteristic of the man.

Perhaps the toughest moment of his service as archbishop was when he was falsely accused of sexual misconduct with a minor, his name on headlines of every newspaper around the world.

I was rector of Mundelein Seminary at the time and I remember he called me late at night two days after the accusation came forward. He said that he was worried about what the seminarians might be thinking, what they were feeling.

He asked whether, maybe, he could come out to the seminary, share some words and answer any of their questions. I said, "Sure, your Eminence, please come."

He did visit several days later. All 120 seminarians were gathered in the tiered upper lecture hall on the second floor of the studies building. When the cardinal and I came into the room, everyone got quiet; no one said a word. After a brief comment by the cardinal, he paused. Finally, he asked if the students had any questions. No one said a word. Finally, one of the seminarians, aware of how devastating it is when a minor is abused, but wondering what the cardinal was experiencing asked, "Your Eminence, what has it been like for you?"

The cardinal paused for the longest time and finally said, "I was embarrassed, totally embarrassed. Here I am the cardinal archbishop of Chicago accused of sexual misconduct with a minor, my name on the headline of every newspaper around the world, even in my home town in Italy for my family to see. I went home that night all by myself. I walked up the darkened staircase to the second floor where my room is. I entered my room surrounded by the honorary degrees and recognitions I had received from all over the world and I prostrated myself on the ground as if I were naked. But do you know, I experienced a closeness to God at that moment than I had ever experienced before. I trusted the Lord would see me through."

Joseph regularly prayed for his accuser, who later withdrew his allegation. The cardinal was not vindictive nor vengeful but forgave the man who falsely accused him. What makes a big man is one who can forgive. Joe Bernardin was a big man. 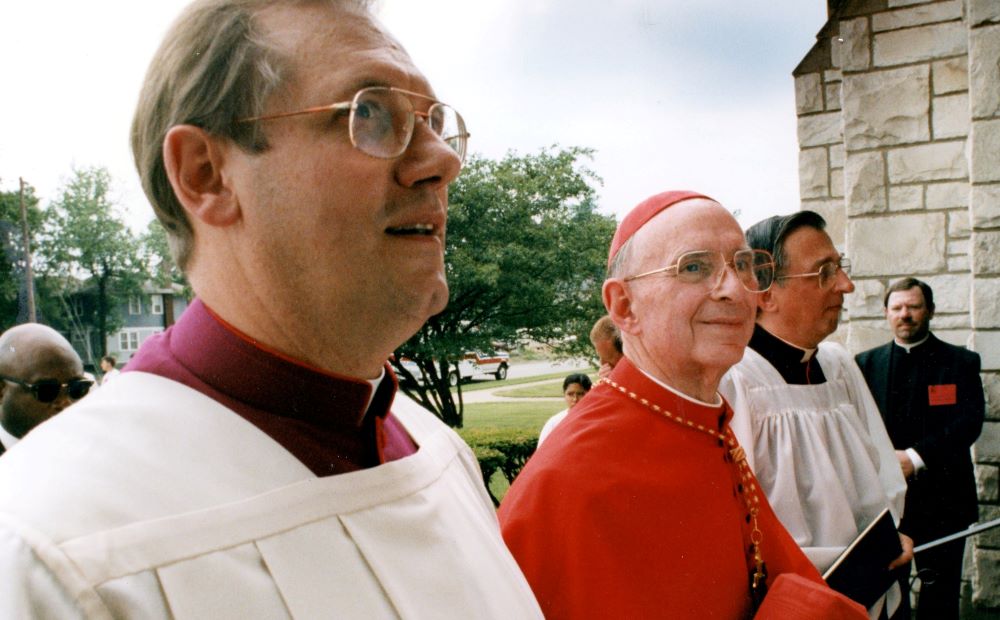 Facing his own death was another big challenge for the cardinal. He did not want to die. There was so much more on his agenda. He was comforted by Henri Nouwen's invitation to look upon death as a friend to be embraced, not an enemy to be feared. He became more accepting.

Toward the end, he composed The Gift of Peace, a book of reflections on his imminent death and the calm and peace he felt. That book has comforted many. His final gift!

As his cancer progressed, Cardinal Bernardin began saying healing Masses all around the archdiocese, where he would pray with people facing suffering not unlike his own. One of those Masses was held outside on the west side in an African American neighborhood. A huge crowd turned out. After distributing Communion, the cardinal went to sit down.

All of a sudden an elderly lady came walking down the center aisle and climbed the steps into the sanctuary. Some at the Mass got concerned, but the cardinal said to let her come forward. She came right up to where he was sitting. He took her hands and intently listened as she talked with him. I don’t know what they said, but you could see it was comforting for the woman, who left smiling as if a burden had been taken from her shoulders.

Bernardin's illness taught him to have time for everyone, especially those who counted for nothing.

When I visited the cardinal for the last time, he was very weak, unable to get out of bed. Alongside his bed was his book manuscript. He was delighted he had finished it. I thanked him for his witness and for what he meant to me. He thanked me in a whispering voice and said he was proud of me. Somehow conversations with him always turned back to be a conversation about you. 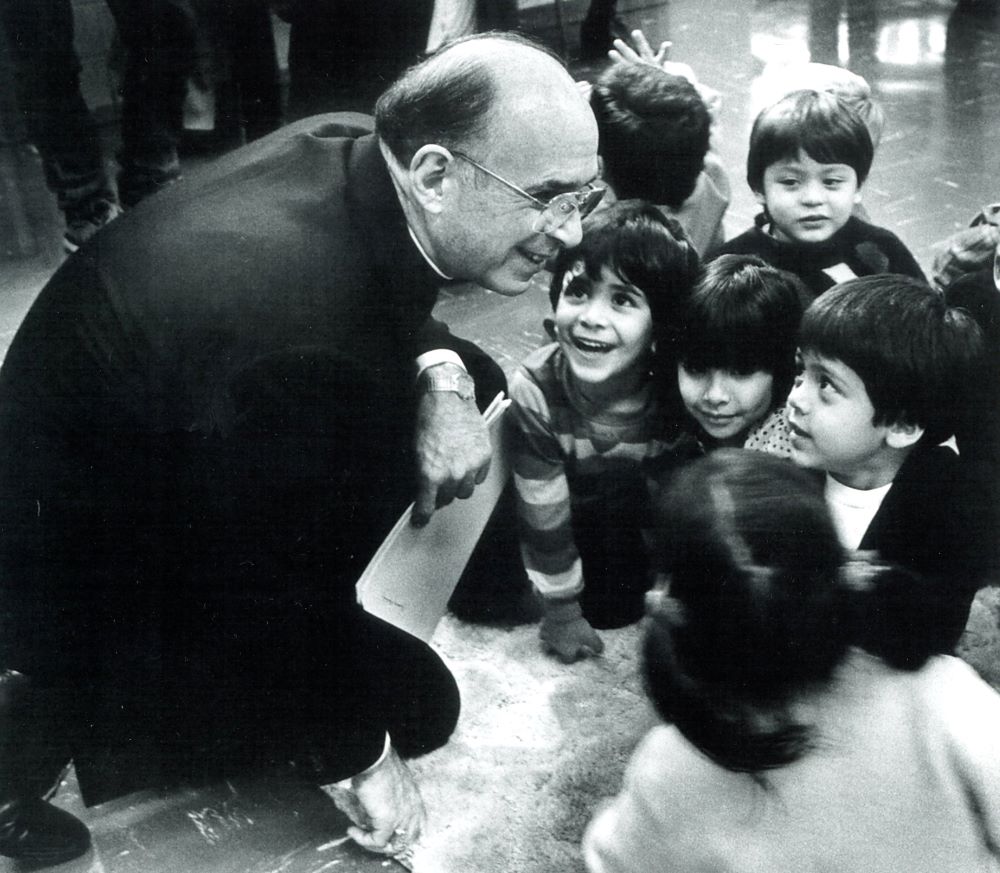 His death was a great loss for the church. Oh, how Bernardin and his manner are needed today.

He was a Southern gentleman with the knack of bringing opposing opinions together. I don't think I ever saw him lose his temper. He patiently listened and was able to keep looking for a path through an impasse. He could get frustrated, disappointed, hurt, but I never saw him spiteful or seeking to get back at someone.

He was a transformative leader, a breakthrough leader, someone who shaped the times and provided a direction for the church through troubling waters. Such a leader is not always welcomed, valued or appreciated. Such a leader can face opposition, resistance and even be shunned. Is that not happening to Pope Francis, clearly a transformative leader?

Bernardin, as chair of the U.S. Conference of Catholic Bishops Pro Life Committee, was invited by Fordham University to give the 1983 Gannon Lecture. It was there he introduced a call for understanding life issues as a consistent ethic of life, linking issues of poverty, euthanasia, nuclear war and abortion. He drew criticisms from all sides. Critics contend the notion makes all moral issues equivalent, on the same plane. Yet the consistent ethic was a call to uphold the dignity of all life from conception until death.

I never saw him more hurt than when some of his brother cardinals and bishops dismissed his longing to find common ground and joined in openly resisting his voice. His opponents saw the Common Ground Initiative as compromising, watering down the faith, giving in to less than orthodoxy. They completely misunderstood his burning desire to bring opposing, warring factions to some deeper level of understanding. He never sought to compromise what the church teaches, but to heal a divided and polarized church.

With Fr. Phil Murnion, Bernardin went forward with the Common Ground Initiative, despite the opposition, calling the church to find common ground, consensus. He did not seek a weak middle ground, a milquetoast center, but finding harmony between diverse positions that at first might seem opposed.

You can hear the echo of Bernardin's cry in Pope Francis' call for dialogue and discernment, seeking a higher level resolution of differences. Francis accomplished this in the Synod on the Family, but not at the synod for the Amazon.

Celebrating the 25th anniversary of Cardinal Bernardin's death, we, in the United States, still find ourselves a divided, polarized church. But Bernardin would not be pessimistic. He trusted in the promise of the Spirit. He would be sitting down, engaging those on all sides. He would keep looking patiently, respectfully for a way through the impasse.

Brother Joe, oh, how we miss you. Oh, that we might learn from you how to move divergent opinions toward consensus and unanimity.

Related: If we'd listened to Cardinal Bernardin, the Catholic Church would not be where it is today
Related: Cardinal Bernardin's gift fits all sizes
A version of this story appeared in the Nov 26-Dec 9, 2021 print issue under the headline: 'I am Joseph, your brother'.