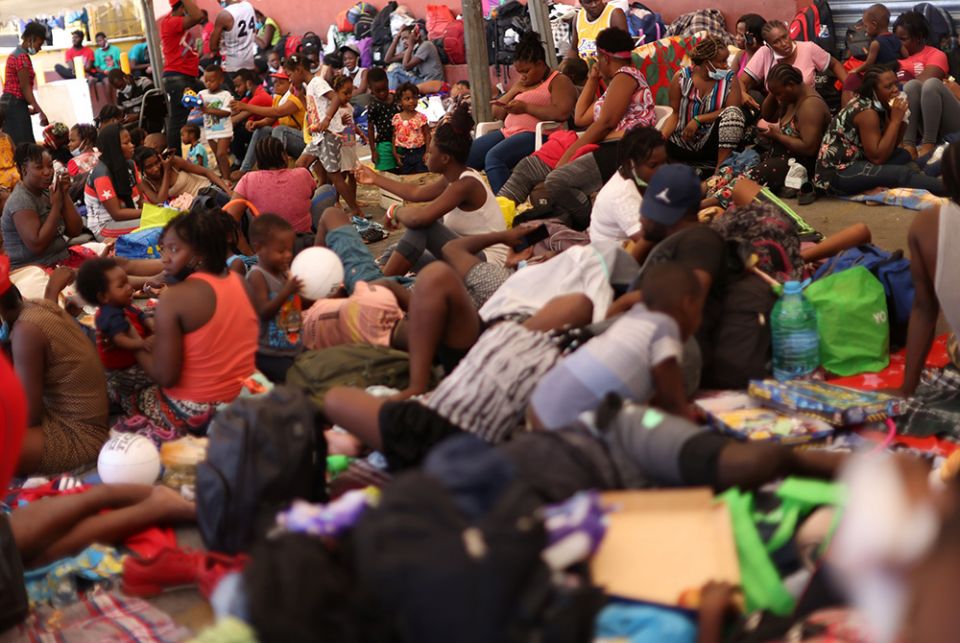 Haitian migrants trying to reach the U.S. rest outside a shelter Sept. 24 after arriving in Monterrey, Mexico. (CNS/Reuters/Edgard Garrido)

The disturbing images of United States Border Patrol agents charging on horseback at Haitian migrants at the southern border last week set off an understandable firestorm of shock and outrage, which led to mounting criticism of the Biden administration for allowing such inhumane tactics on its watch. The cruel deportation policies aimed at Haitian migrants even led to a senior diplomat to resign in protest Sept. 23.

Commenting on the obvious evocation of America's history of chattel slavery and racial injustice arising from white and white-presenting men on horseback corralling defenseless Black migrants on foot, Vice President Kamala Harris addressed the situation during an appearance on the TV show "The View" on Sept. 24. 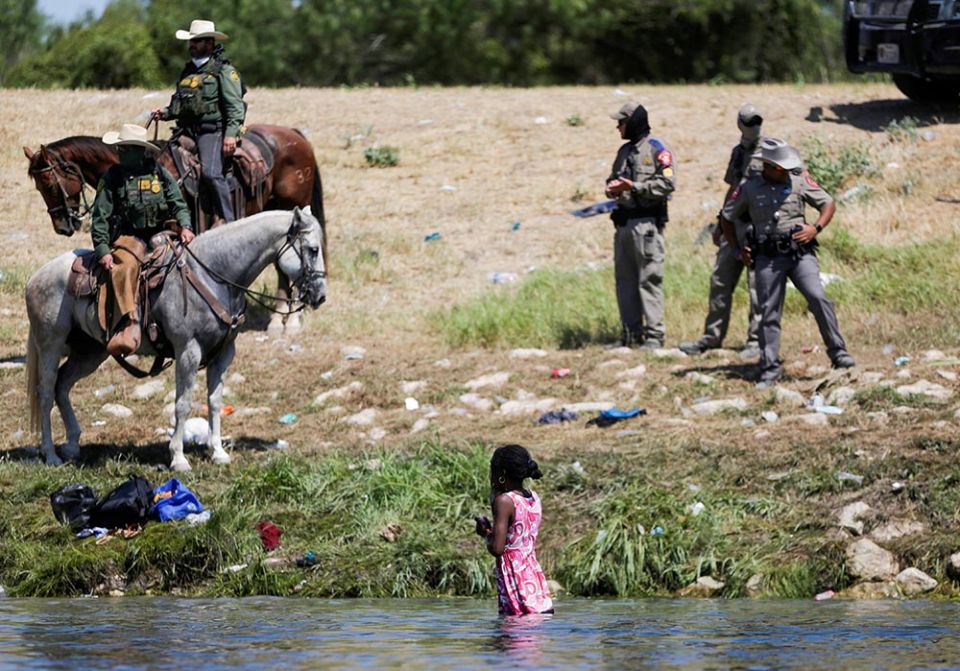 Harris said that the pictures of the Border Patrol agents "evoked images of some of the worst moments of our history, where that kind of behavior has been used against the Indigenous people of our country, has been used against African Americans during times of slavery." But she then declined to address whether the Biden administration would halt further deportations of Haitian migrants.

For all the condemnation of the optics at the border, there appears to be little interest on the part of senior administration officials in attending to the actual problem of inhumane and unjust immigration policies that has led to the mass deportation of migrants at the southern border. In fact, much to the consternation of human rights advocates and many Democratic lawmakers, the Biden administration continues to support the Trump-era law known as Title 42, which authorizes the refusal of refugees and migrants at the border under the guise of "health protections" in the wake of the COVID-19 pandemic.

However, this justification was and remains the thinnest of veneers intended to cover over dehumanizing policies under the guise of public health concerns.

Network, the Catholic social justice lobby, sent a Sept. 23 letter to Biden demanding he end the use of Title 42 to deny asylum-seekers their basic human rights. The letter, which was co-signed by 164 Catholic religious congregations, organizations, universities and academic centers (including the Center for Spirituality at St. Mary's College in Notre Dame, Indiana, where I serve as director), pointed to both an earlier federal district court decision ordering the Biden administration to halt this practice and Pope Francis' own statement Sept. 26 on the occasion of the 107th World Day for Migrants and Refugees in which the pope calls for greater recognition of the rights of migrants and refugees.

For as much as the continuation of this unjust practice at the border has confounded critics, it also appears that many within the Biden administration are likewise surprised by the direct criticism and protest in response to its actions.

Caitlin Dickerson, writing in The Atlantic Sept. 25, notes that there seems to have been a shift in public opinion and political critique in the wake of the many horrendous immigration policies put in place by the Trump administration. An unexpected, but ultimately important, consequence of the increased scrutiny directed to U.S. border policy during the previous administration has been continued attention to what is happening with Immigration and Customs Enforcement.

Up until recently, the Biden administration seemed to have been banking on the persistence of this double standard, whereby the left-leaning parts of the public assume general goodwill on the part of Democratic politicians and therefore give them a pass. The administration has taken up court battles to protect some of Trump's harshest asylum policies and commenced flying multiple planeloads of migrants back to Haiti. …

But the assumption that these tactics would go unchallenged when deployed by a Democratic administration, as was often the case in the past, appears to have been a serious miscalculation. The spotlight that Trump shined on the southern border for four years is still plugged in. The public is still paying attention. And images that evoke the era of slavery — with fair-skinned men on horseback rushing Black migrants, whiplike reins flailing behind them — have added to a long-simmering push from the left to consider immigration policy not simply in terms of economics or national security, but also in terms of race.

There is no longer openness among many allies of Democratic politicians to turn a blind eye, make excuses or grant a blanket "benefit of the doubt" when it comes to rank dehumanizing policies and practices.

I think this is a good and important development. There is no question that over the last five years the Republican Party, at least at the national level, sold its soul to the devil in backing a dangerous demagogue whose immigration policies were overtly racist and dehumanizing, which resulted in the party's relinquishing of any claim to a moral high ground.

But to assume that just because the opposition party is worse than your own that you ought to be able to get away with an immoral immigration policy here or there is wrongheaded and needs to be called out.

No politician is perfect and no party's policies will ever be universally devoid of justified criticism on ethical grounds. However, the treatment of migrants, refugees and asylum-seekers at our nation's border is something for which debate is not needed because the moral imperative is plain as day. These dehumanizing policies are scandalous and sinful in their application against those at our border in general, but even more so when we consider the way in which they are being deployed against our Haitian sisters and brothers — who have not only experienced some of the greatest poverty in the Western hemisphere, but have also suffered the political chaos of a presidential assassination and a devastating earthquake just within the last few months.

It is no secret that President Biden is an admirer of Pope Francis, both as a practicing Roman Catholic and from the perspective of an inspirational moral leader on the global stage.

Therefore, I urge the president to heed the pope's words from Sept. 26, reminding both Catholics and all people of goodwill of what God demands of us individually and collectively when it comes to welcoming our sisters and brothers in desperate need.

"Ours must be a personal and collective commitment that cares for all our brothers and sisters who continue to suffer, even as we work towards a more sustainable, balanced and inclusive development," the pope said. "A commitment that makes no distinction between natives and foreigners, between residents and guests, since it is a matter of a treasure we hold in common, from whose care and benefits no one should be excluded."

Young Karenni Catholics, once refugees, hit the road for a retreat