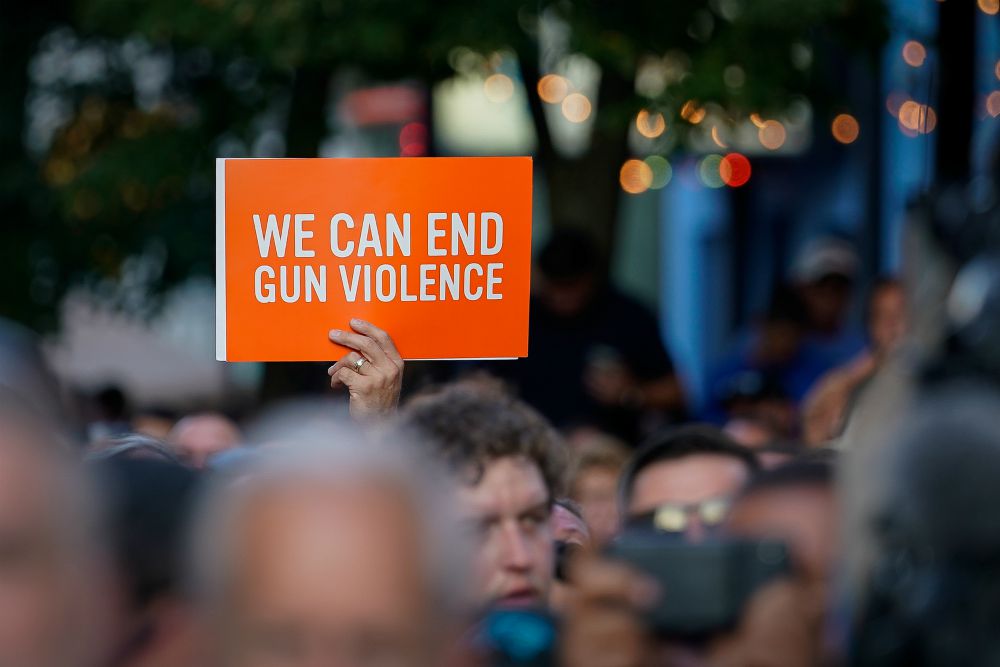 A sign is displayed during a vigil in Dayton, Ohio, Aug. 4. (CNS/Reuters/Bryan Woolston)

In the wake of the horrific mass shootings in El Paso, Texas, and Dayton, Ohio, this week, it occurs to me that, when it comes to guns, the United States collectively behaves in a way that mimics an addict in denial. Anybody familiar with 12-step recovery programs knows that the entire effort to manage a behavior or dependence on a substance that has gotten out of control is predicated on the ability to acknowledge that there is a problem in the first place. Americans in general — and Republicans in particular — refuse to admit that there is a gun problem.

While there are important differences between the illness of addiction as it afflicts an individual and the gun crisis in America, some of the collective problematic behaviors of the latter have me thinking about how thousands of women and men suffering from the former struggle to respond to what often appears to be a seemingly helpless circumstance.

Instead of addressing the problem head-on, acknowledging that an 18th-century constitutional provision to ensure a rebelling colony's right to defend itself against a foreign empire should not provide cover for nearly anybody to have access to weapons of mass murder, Republicans and "gun rights activists" deflect focus on tangential issues.

This week, President Donald Trump condemned bigotry (yet refused to acknowledge his own campaign's rhetoric as inciting bigotry), but blamed the mass shootings on "mental illness, violence in the media and violent video games." The American Psychiatric Association released a statement refuting Trump's embrace of a gun lobby talking point: "The overwhelming majority of people with mental illness are not violent and far more likely to be victims of violent crime than perpetrators of violence." Blaming gun violence on those struggling with mental health only serves to further stigmatize an already vulnerable population, and there is absolutely no causal relationship between violent video games and real-world violence.

I learned about the El Paso and Dayton shootings while in Australia this week delivering a series of lectures. As in the United States and every other country in the world, a significant percentage of Australia's population suffers from various forms of mental illness, and violent television, movies and video games are as common here as anywhere else. And yet, like much of the rest of the world, Australia does not experience mass shootings (or gun violence in general) anywhere near the mind-numbingly absurd levels of the United States.

What accounts for the difference? Australia's strict gun laws that limit or, in some cases, outright prohibit personal gun ownership. It hadn't always been this way in Australia, but after the 1996 mass shooting in Port Arthur, Tasmania, where a shooter armed with a Colt AR-15 SP1 killed 35 people and wounded 18, the Australian government — with the widespread support of the Australian people — passed legislation banning semi-automatic and military-style weapons within weeks of the mass shooting. There was an assault-weapon buyback program, which according to at least one Harvard University study, was extremely successful.

Australia's neighbor to the southeast, New Zealand, recently followed suit, passing strong legislation banning most assault weapons within a month of the mass shooting at two mosques in the city of Christchurch, which left 50 people dead.

As the scientific data make clear, the one factor that accounts for America's disproportionate gun violence is the number of and wide access to guns in America. According to a 2016 study published in the American Journal of Medicine, Americans were 10 times more likely to die as the result of a firearm than residents of other economically developed countries. The study also shows that firearms deaths in the United States increased between 2003 and 2010 — the number of guns in America (approximately 120 per 100 persons) is also on the rise.

American exceptionalism is real, but it is not the laudable characteristic so many Americans think it is. Our exceptionalism is increasingly located in our ability to deny reality. And this is something about which we should be deeply ashamed. While this denial is a wide-ranging societal problem, it is especially acute with Republican politicians. We see it in the refusal to accept what the rest of the world has long recognized as true about global climate change, and we witness it in the red-herring theater that takes the public stage after every tragic mass shooting. Politicians, awaiting their next campaign-contribution "hit" from the gun lobby, dissemble, obfuscate, distract, scapegoat and simply deny that there is a problem. Or, on the rare occasion there is any remote acknowledgment that there may be a problem, the same leaders claim that, sadly, there is just nothing that can be done about it.

But watching from Australia the usual post-tragedy gears of performative handwringing kick in and statements of "thoughts and prayers" proclaimed brings into greater relief how truly sick my home country is. Perhaps no headline makes the painful absurdity of America's gun problem clearer than that of an NPR story, which reads: "Dayton Police Killed Shooter Within 30 Seconds Of 1st Shot, Police Chief Says." At first glance, it sounds like a triumph of law enforcement and police response, which in some ways it certainly was. And yet, in fewer than 30 seconds, the gunman managed to kill nine people and injure 27. That one 24-year-old man in Ohio could legally obtain a weapon of such violent force is simply inexcusable.

When someone whose behavior is as destructive to themselves or others on the personal level as what we see on our societal level, those who care about them stage an intervention to help them see their problem. There are some people, notably gun-control activists like the Parkland students and some Democratic politicians, who care enough about the United States to intervene, to call out the denial, and to seek real change. But more of us need to do this, particularly people of faith and especially church leaders.

It is not enough to issue statements decrying the plainly obvious tragedy of mass deaths or expressing prayerful sentiments. Instead, church leaders must name the social denial and political deflection for what it is: a systemic problem that can be and must be addressed. We have a moral and a civil obligation to acknowledge that we as a country have a problem, a social sickness. Absolutely nothing will change until we overcome our denial and accept that we are out of control, and many more people will die because of our collective denial and inaction. At present, we the people are enabling the cycle of violence in our country. It is time that we learn from Australia, New Zealand and other societies that have staged the intervention and sought the changes needed to promote a culture of life.

This story appears in the Gun Violence feature series. View the full series.
A version of this story appeared in the Oct 18-31, 2019 print issue under the headline: America is addicted to guns, and we're in denial.