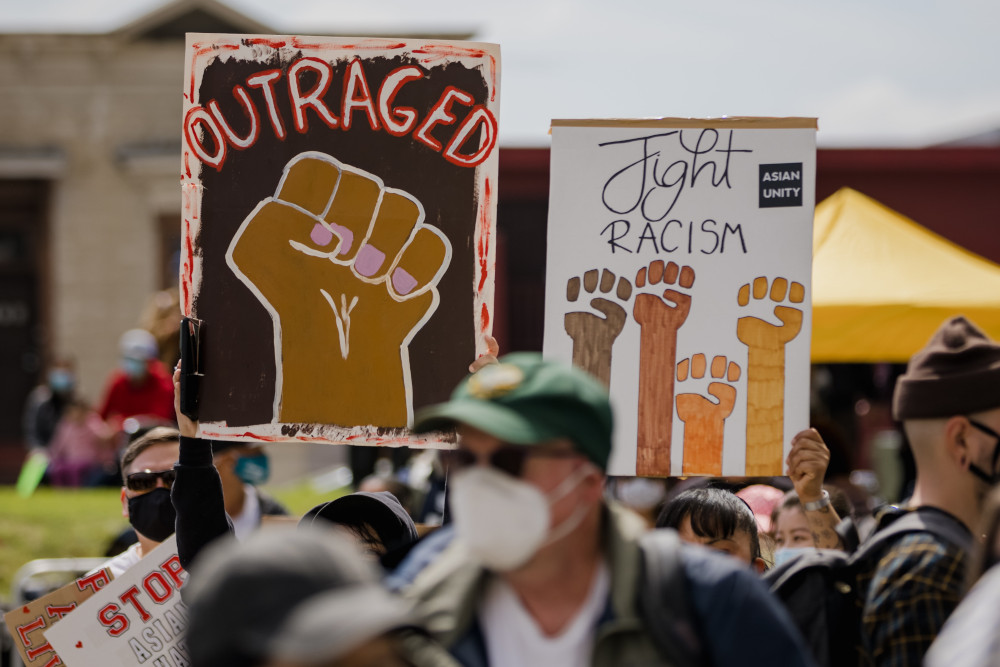 There is as much a spiritual aspect to racism as there is a cognitive or practical one. (Unsplash/Jason Leung)

In 2014, the YWCA Southeast Wisconsin held its annual event to honor those who have made notable contributions in the work for racial justice in the community. Among that year's honorees was Fr. Bryan Massingale, who was then on the faculty of Marquette University in Milwaukee and now teaches at Fordham University in New York. Upon receiving the award, Massingale delivered a short address in which he, for the first time publicly, named racism a "soul-sickness."

Reflecting on the "soul-warping disease" of racism from the perspective of a Catholic theological ethicist, he said: "There are many ways to understand racism, namely, as a political issue, as a sociological phenomenon, as a cultural divide. But for me, at its deepest level, racism is a soul-sickness. It is a profound warping of the human spirit, one that enables human beings to create communities of cold, callous indifference to their darker sisters and brothers. Stripped to its core, racism is that disturbing interior disease that enables people to not care for those who don't look like them."

Massingale has subsequently spoken of racism in the United States as a "soul-sickness" in public lectures, workshops, articles and interviews.

Emphasizing the spiritual dimension of the evil of systemic racism and the persistent dynamics of white supremacy in our nation and church is something that has captured my attention over the years. As a theologian and scholar of spirituality, I wholeheartedly agree that there is as much a spiritual aspect to racism as there is a cognitive or practical one.

While much energy has been placed in creating resources and tools to help educate and organize people around the work of anti-racism, especially in the wake of the murder of George Floyd and other unarmed Black women and men in 2020, there have been comparable few resources that explicitly focus on the spiritual character of racism (for example, Jesuit Fr. Patrick Saint-Jean's The Spiritual Work of Racial Justice: A Month of Meditations with Ignatius Loyola or even my own A White Catholic's Guide to Racism and Privilege).

If we take Massingale's diagnosis of racism as a "soul-sickness" seriously, then it challenges us to seek remedies or at least resources that aid in responding to the spiritual ailment of racial injustice from a holistic perspective that acknowledges the need for an anti-racist spirituality. It is for this reason that I was thrilled to discover a recently published book titled Been in the Struggle: Pursuing an Antiracist Spirituality. 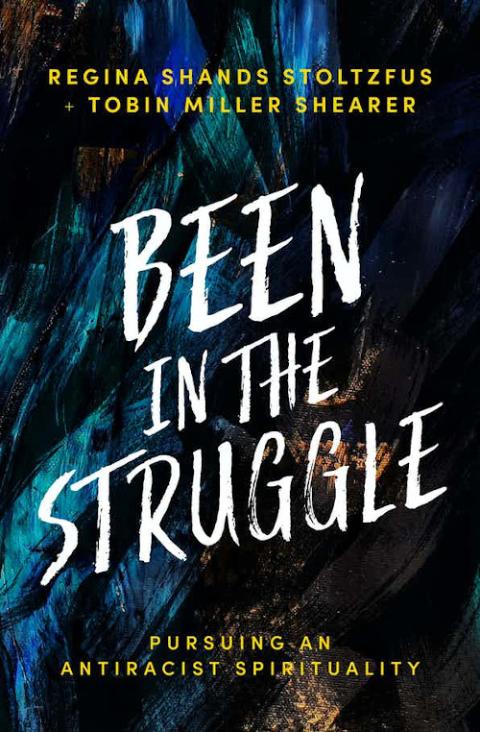 "Been in the Struggle: Pursuing an Antiracist Spirituality," co-authored by Regina Shands Stoltzfus and Tobin Miller Shearer. (Courtesy of Menno Media)

Co-authored by Regina Shands Stoltzfus, a professor of peace justice and conflict studies at Goshen College, and Tobin Miller Shearer, a professor of history at the University of Montana, Been in the Struggle is an engaging and accessible text that takes seriously the importance of attending to spiritual needs as much as the intellectual and practical work of racial justice.

Stoltzfus (who is Black) and Shearer (who is white) have been working together within their Mennonite tradition for decades to educate their fellow Christians about the work of racial justice through workshops and presentations. In the book's introduction, Stoltzfus and Shearer recount the challenges they faced and resistances they encountered, including from church leadership, which will resonate with the many observations and experiences of those engaged in the work of racial justice in the Catholic Church.

I believe that Been in the Struggle has a lot to offer Catholics seeking resources to address the "soul-sickness" of racism.

Many of the key themes presented in the book — the dynamics of systemic racism, its presence in popular culture, the meaning of whiteness and a culture of white supremacy — will be familiar to readers who have engaged anti-racism resources in other venues. What is distinctive about Stoltzfus and Shearer's approach is the attentiveness to the spiritual implications for the work of anti-racism.

Early in the first chapter, Stoltzfus and Shearer provide us with a succinct description of what they mean by anti-racist spirituality. "An antiracist spirituality is a way of being in the world that draws on the unknown and unknowable — which some call Spirit, others name the divine, goes by the word of Mystery, relates to us as God — to encourage, empower, and enthuse amid the intention and the action to undermine the systems of White supremacy around us."

One of the things I value about Been in the Struggle is the attention given to the homework — intellectual, spiritual, practical — that white folks like myself need to do in an ongoing and intentional way in the work of anti-racism.

They further note that it "fosters truth-telling — first to self and then to others," it "lifts up communal efforts, is not afraid of hard conversation, and invites laughter, joy, and human connection," and an anti-racist spirituality "does not demand perfection." This last point is significant because of the inevitable stumbling blocks, uncertainty, missteps and confusion that arise when folks — especially white people — commit themselves to the work of addressing the "soul-sickness" of racism and its complementary dynamic of white privilege.

One of the things I value about Been in the Struggle is the attention given to the homework — intellectual, spiritual, practical — that white folks like myself need to do in an ongoing and intentional way in the work of anti-racism. Reflecting on the significance of identity formation and how our respective social locations inform so much of each of our ways of being the world, Stoltzfus and Shearer talk about what churches and other faith communities, especially those that are predominantly white, need to do. "In order for faith communities to have genuine, sustained conversations about race, they must understand White supremacy and its effects, which have driven economics, politics, and other systems that Black people must encounter and navigate daily."

Throughout the book, they highlight how anti-racism work is fraught with tensions and challenges, noting that it can be very difficult to talk about social and ecclesial dynamics that focus on racial injustice. Nevertheless, in addition to all the social or political reasons one might feel compelled to engage in the work of racial justice, as people of faith we are called to evaluate our motivations and commitments, even in the face of discomfort and fear. And we do so in a way informed by a call to live the gospel and announce the in-breaking of God's reign. 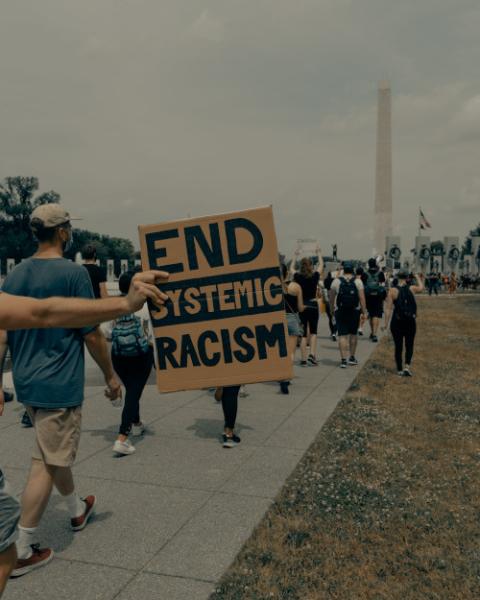 We might ask ourselves: How does my prayer inform or is shaped by the call to work for racial justice? (Unsplash/Clay Banks)

They also talk about practical strategies for institutional and collective transformation. That we don't do the work of justice and peace alone should come as no surprise to Christians, but it can be easy to forget when facing the deeply embedded obstacles of racial bias, systemic racism and a culture of white supremacy. Stoltzfus and Shearer argue for something of a both/and approach to developing an anti-racist spirituality, which requires both an individual commitment while also recognizing our intertwined and mutual obligation to work collectively.

Recognizing that the work of anti-racism is multidimensional, Stoltzfus and Shearer note that is "has at least three broad components: bearing witness, fostering justice, and sustaining work for the long haul." For Christians, these three dimensions ought to be grounded in and supported by an ongoing recognition that the work that is done is not merely a social agenda, but is also something that requires our attunement to the presence of God.

We might ask ourselves: How does my prayer inform or is shaped by the call to work for racial justice? Where is God in the midst of my learning, relearning and bearing witness? What sort of examination of conscience can I make in order to reflect on the socialized racism in my own heart, thoughts and practices?

Resources like Been in the Struggle help draw our attention to the multidimensionality of the work for racial justice, particularly for those who are people of faith. It reaffirms Massingale's conviction that racism is indeed a "soul-sickness," and therefore any meaningful response and transformation must take into consideration the spiritual dimensions of our existence, especially our relationships to one another and God. And it is a call for communities of faith to engage in this work precisely because it is something that God is calling us to do in the light of the gospel.