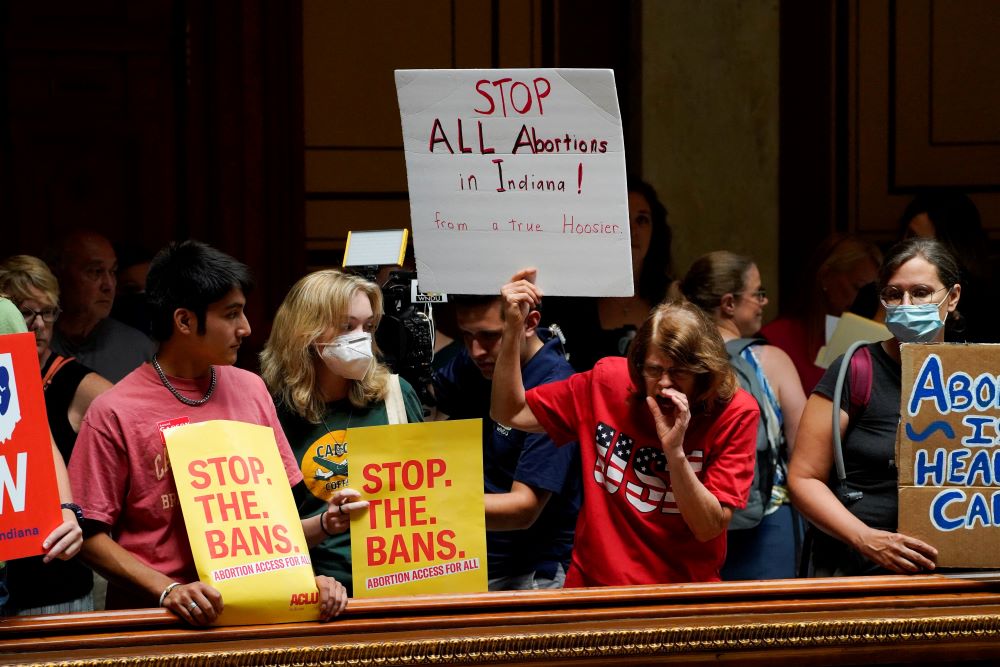 Activists protest inside the Indiana Statehouse in Indianapolis July 25 during a special session debate on banning abortion. (CNS/Reuters/Cheney Orr)

It was an airtight argument that went like this: Abortion is a violation of the universal, exceptionless moral law against the direct taking of innocent life. This moral law should be reflected as much as possible in the civil law. Any invocation of a right to violate such a moral and civil law is absurd. The case against legal abortion is definitive of the meaning of Catholic faith.

Following this logic, in 1980 and 1984 I voted for Ronald Reagan for president primarily because of his capacity to appoint justices to the United States Supreme Court who would overturn Roe v. Wade, the 1973 decision that established a constitutional right to choose an abortion.

Forty years later I no longer think this way. When the Dobbs v. Jackson Women's Health Organization decision eliminating the right to choose an abortion was announced June 24, I read it and found myself most in agreement with Chief Justice John Roberts, who said: "Both the Court's opinion and the dissent display a relentless freedom from doubt on the legal issue that I cannot share."

To be sure, matters of the heart have factored in the change in my thinking: a failed marriage; listening at length to complex stories of sex and suffering; weeks spent at the Los Angeles Catholic Worker working with the unforeseen vulnerabilities of the residents on Skid Row. These experiences moved my heart from the comfortable expectations of my suburban upbringing into a raw world unable to hide its dramas of grace and sin. The change in my thinking about law and abortion emerged from such experiences. 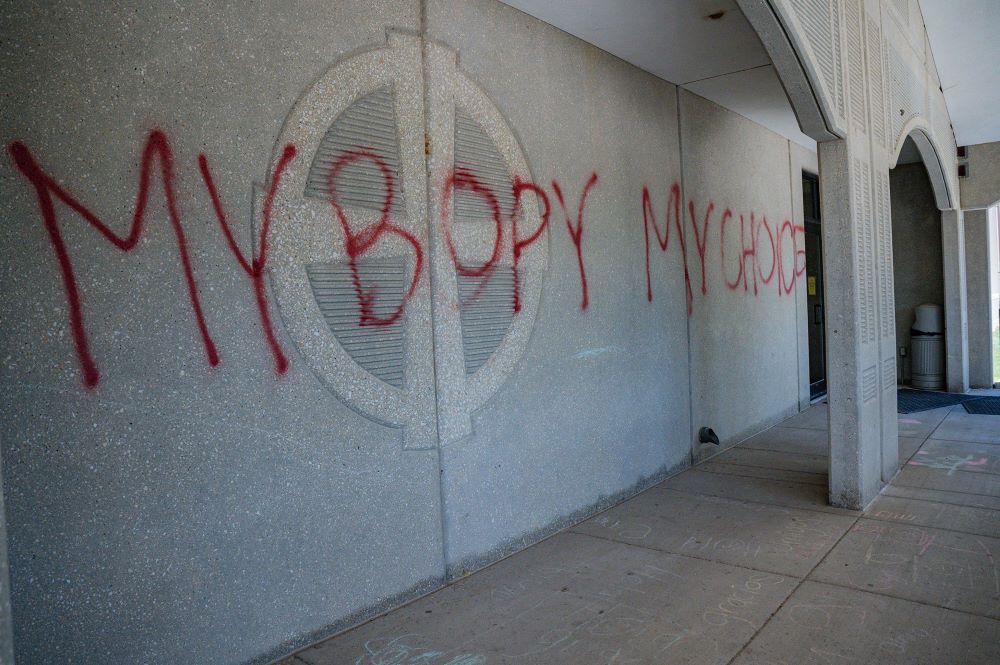 Graffiti that supports abortion rights is seen on a wall at the grade school of the Church of the Ascension in Overland Park, Kansas, July 10, 2022. Kansas voters on Aug. 2 overwhelmingly rejected a ballot measure that would have allowed the Republican-controlled Legislature to tighten restrictions or ban the procedure outright. (CNS/Courtesy of The Leaven)

One change outweighed all others: the inclusion of the full implications of the dignity of women in my moral reflections on the matter. I have never doubted the right to life of the fetus. But two implications of the dignity of women have been especially formative in expanding my understanding of the range of values at stake in matters of law and abortion: women's full moral agency and their right to bodily integrity.

The moral agency of pregnant women

In his 1995 encyclical Evangelium vitae, Pope John Paul II said that no one may appeal to the authority of conscience to justify abortion since it is never permissible to violate the universal and exceptionless moral law against the direct taking of innocent life. That way of putting things perfectly captured my thinking in the early 1980s. But I began to find the argument incomplete and even unintentionally obfuscating: I could see the role of the fetus, but what was the role of the pregnant woman in the argument?

Either women seemed entirely absent from such arguments, which focused instead entirely on the right to life of the fetus, or women were seen as present but unthinking individuals whose bodies were contested scenes of legal struggle by other people, or pregnant women were seen rightly as objects of compassion but not seen as full moral agents capable of deciding themselves about such an intimate matter.

Related: Wise abortion public policy should deal with realities as well as moralities

A concise, powerful statement by Sr. Teresa Forcades, a Catalan Benedictine, convinced me of the incompleteness of such views. In 2009 Forcades spoke in a television interview in favor of a mother's "right to decide" in the matter of civil law and abortion. In response, the Vatican demanded her public affirmation of the church's moral doctrine. In turn, Forcades issued a public statement arguing that the issue of law and abortion should properly be considered in Catholic thought as a clash of absolutes: the absolute of the right to life and the absolute of the right to self-determination before God by any pregnant woman.

The Catholic approach to abortion has relied on the law too much.

Forcades' argument has the merit of naming in Catholic terms the actual difficulty we face with law and abortion. It's not the conflict I imagined 40 years ago between truth-tellers and freedom-loving relativists. Instead it's a conflict of absolute goods. Seeing things in such a light helps bring into view the right of a woman to exercise her moral agency — or, in Forcades' terminology, her self-determination — especially when faced with a difficult pregnancy. Forty years ago, the moral law in such matters seemed to me universal and exceptionless. Reflecting now on the dignity of pregnant women manifest in their moral agency, I think that there must be exceptions.

The right to bodily integrity

Few slogans fired up my past pro-life energies more than "my body, my choice." In the slogan, I read out the relativist story of our times, that in the name of a material reality like the body, anything goes. I also felt one with the Catholic Church in the United States in thinking that our battle over abortion was precisely with the pro-choice absolutism the slogan represented.

But over time I began to think differently about the slogan. First, it became obvious that most pro-choice people were not the slogan-wielding absolutists of my past culture war fantasies. And, second, I began to reflect on the abiding importance of the body in Catholic moral thought and thus to consider whether, even for the sake of the right to life, is it nevertheless an injustice to use the coercive force of law to compel pregnant women to use their bodies in a way prescribed by others?

Writing recently in America, theologian Kathleen Bonnette called for more attention in Catholic thought on law and abortion to the right to bodily integrity of pregnant women. Drawing on the writing of Pope John XXIII, she explained the right to mean "the recognition that our bodies are our own, they matter, and we have the right to determine what or who gets access to them."

As with Forcades' affirmation of the right to self-determination, Bonnette's insightful argument about the right to bodily integrity names a moral fact too often missing from Catholic considerations of abortion. Her argument also invites an overdue focus on the many ways that the integrity of women's bodies is threatened by sexual assault and rape, by pregnancy itself and especially life-threatening pregnancies, and by an outrageous and often racialized lack of medical care for the pregnant and postpartum poor.

My Catholic absolutism of the 1980s sought for the civil law to restrict abortion as much as possible because only the right to life of the fetus mattered. But that is too simple: It affirms only one injustice at stake in these matters. It would be better, Bonnette says, also to recognize a painful and inevitable paradox: that by their coercive nature laws that aim to restrict the injustice of abortion may also violate the bodily integrity of women. Bonnette says that civil law may still restrict abortion. But she insists, too, that as a matter of respect for the bodily integrity of women the church should turn more to methods of persuasion. Bonnette is right. The Catholic approach to abortion has relied on the law too much.

In the 1980s, my Catholic case against abortion was airtight. The only things missing were the pregnant women involved in the matter.

A version of this story appeared in the Aug 19-Sept 1, 2022 print issue under the headline: Church teaching on dignity of women changed my mind about abortion.