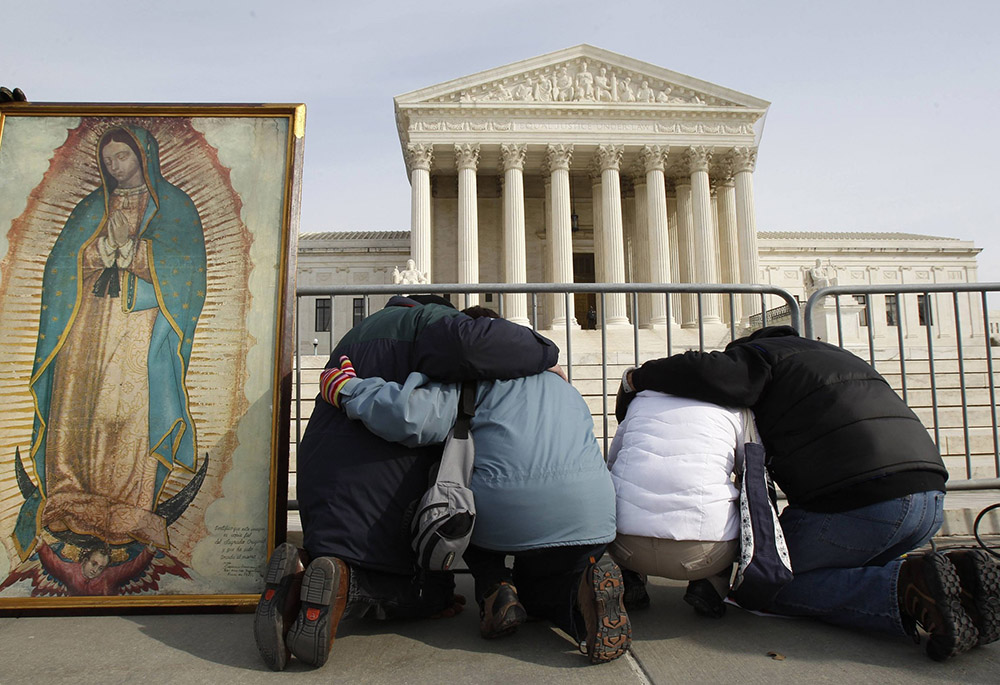 March for Life participants kneel in prayer alongside an image of Our Lady of Guadalupe in front of the Supreme Court building Jan. 24, 2011, in Washington. (CNS/Reuters/Jim Young)

Today is the annual March for Life, when Catholics and others gather in Washington to acknowledge the anniversary of the 1973 U.S. Supreme Court decision Roe v. Wade, which asserted there is a constitutional right to abortion. The church's opposition to abortion is rooted in that most universal moral prohibition, "thou shalt not kill," and that most elemental foundation of all our moral teaching, the transcendent dignity of the human person.

Last week, I was pleased to commend the recent pastoral letter from Archbishop John Wester of Santa Fe, New Mexico, "Living in the Light of Christ's Peace: A Conversation Toward Nuclear Disarmament." Wester's letter also was rooted by these twin moral anchors, and he recalled the passage in the Gospel of Luke when the disciples ask Jesus for permission to call down hellfire on their enemies, and he rebukes them. Wester wrote:

Jesus rebuked the disciples because they wanted to call down fire from heaven. He absolutely forbids even the thought of it. He rejects violence of all kinds, including retaliation and warfare. He will not tolerate it among His followers. Jesus wants us to be as nonviolent and loving as He is, come what may. We are not allowed to kill people.

The Catholic Church, almost alone in U.S. cultural discourse, has always understood that the issue of abortion and the issue of war were linked. To invoke the metaphor first developed by the late Cardinal Joseph Bernardin, Catholics hold to a "consistent ethic of life," and we find all threats to life morally objectionable, from the direct taking of a human life to the acquiescence in militarism that has killed millions and threatens all human life to our unwillingness to confront the environmental crisis that also threats all life on the planet. 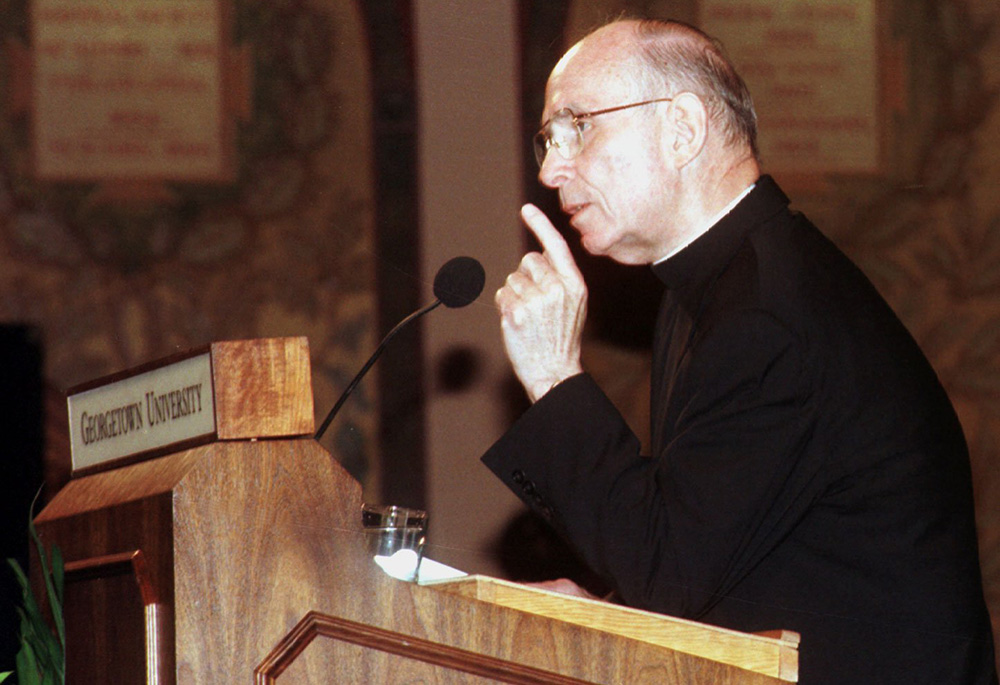 Cardinal Joseph Bernardin of Chicago makes a point in his Sept. 9, 1996, talk at Georgetown University. In his speech the cardinal stressed the need to establish a ''consistent ethic of life'' in America and to bring religious values into the nation's public life and culture. (CNS/Bob Roller)

For the past 40 years, the consistent ethic of life has been the essential position of the Catholic left. It does not resolve all issues. As Fr. Charles Curran wrote here at NCR back in 2010, while there is comprehensive agreement among Catholic theologians regarding the immorality of almost all abortions — Curran believed it was morally permissible to perform a direct abortion to save the life of the mother and in a few other rare circumstances, such as when the pregnancy was the result of rape or incest — there has been widespread disagreement about how Catholics should approach the legal issue of abortion.

Now the legal issue is at the forefront of national debate, as it is widely expected the U.S. Supreme Court will overturn Roe after it heard oral arguments in December in the case Dobbs v. Jackson Women's Health Organization. As I pointed out at the time, the case only technically involves the difference of a single week in pregnancy: The Mississippi law bans abortions after 15 weeks and the Jackson abortion clinic stops performing them at 16 weeks. Why, then, is everyone at the barricades?

Regrettably, the debate about the legality of abortion has become dominated by the extremes. Pro-choice groups insist that the kinds of limits on late-term abortions found in most other Western democracies would be a catastrophic affront to freedom, and pro-life groups enact vigilante laws like the one in Texas that invites a meltdown in our system of justice. There is nothing, absolutely nothing, in our political culture that will cause the extremes to move to the center.

I have voiced many times my belief that making abortion illegal is not the answer. We need to make it unthinkable first, guaranteeing that women are never disadvantaged in social or professional life on account of a pregnancy, building a culture of life that welcomes children and respects women in equal measure.

That is not how this is going to play out, however, so it is my hope that the Catholic left will at least cling to the consistent ethic of life to remind our friends on the political left that, whatever the state of the legal issue, we Catholics shall maintain our pro-life witness, on this issue as on our opposition to the death penalty, nuclear weaponry and environmental degradation.

Re-reading Fr. Curran's careful reasoning – and remembering his insightful lectures when I was lucky enough to have him as a professor in the 1980s! – the contrast with some of the coarse extremists today could not be more stark.

How can a morally serious person overlook the fact that the pro-life movement was willing to climb into bed with Donald Trump in order to achieve its goal of a more conservative judiciary? When Marjorie Dannenfelser, of the Susan B. Anthony List, agreed to chair Trump's pro-life reelection committees, who can ever again look to her as a moral leader?

Here is a challenge for our conservative friends: Acknowledge that poverty remains the leading abortifacient in our country and throughout the world, and bring forward policies that will ameliorate it.

How can a morally serious person give credence to the theological piffle offered by groups like Catholics for Choice? It is astonishing that they seem not to notice the moral laziness of the slogan "my body, my choice" after watching anti-vaxxers embrace the very same slogan for two years. You can't baptize libertarianism, no matter how hard you try.

Here is a challenge for our liberal friends: Liberals rightly have been keen to call out historic racism and demand a reckoning. Why is the racist eugenicism of Margaret Sanger, the founder of Planned Parenthood, overlooked? Alexis McGill Johnson's column last year in The New York Times was the exception that proved the rule. Further, Johnson's argument betrayed the fact that you can't confront the eugenics unless you first confront the libertarianism.

The year after starting Planned Parenthood, Sanger launched the Birth Control Review, and one of its first published essays stated, "For race betterment, the present differential nature of the birth-rate must be changed. A spread of birth control to the less capable part of the population will be an important advance for eugenics in cutting down the racial contribution of inferior stocks."

To be fair, Josef Mengele had not yet given eugenics such a bad name. The Catholic Church consistently condemned eugenics back when it was fashionable, and the church was called obscurantist for that opposition.

Extremist organizations are the groups that will dominate the airwaves in the months ahead, but liberal Catholics are well advised to tune out the rhetorical boxing match that evidences nothing so much as the degree to which groups like Catholics for Choice and the Susan B. Anthony List have developed a strangely symbiotic relationship. They deserve each other.

The rest of us need look for creative ways to witness to our Catholic faith's unshakeable commitment to human life and insist that the church continue to develop a commitment to the equality of women in society that accounts for and embraces the fact that women can and do bear children.

Witness can take many forms. We can support groups like Democrats for Life of America, which recently had a pre-march breakfast canceled because the management at the bookstore-café where it was planned, Busboys and Poets, evidently think granting a heckler's veto is appropriate for a bookstore!

We can witness in our families and churches and neighborhoods by supporting those women who chose life and face the challenges of single motherhood, those women facing a crisis pregnancy, and those women who procured an abortion and struggle with the spiritual consequences that always attend sin. If we are unwilling to support women in such situations, our voice becomes "a resouding gong or a clanging cymbal" (cf. 1 Corinthians 13:1).

We can witness with our voices and with our votes, mindful always that our Catholic moral tradition demands that we raise our voices for both the mother and the child, in every instance, recognizing that abortion is the ultimate exercise in exclusion.

We can witness to the consistency of our moral beliefs by clinging to the consistent ethic of life, the only, repeat only, morally and intellectually serious position I have encountered in researching and writing about the issue of abortion for 25 years.

It may seem that such forms of witness will be ineffective, that our voice will get lost. Witness, however, introduces God's grace into the equation. Remember that Western culture was at its nadir in the late 12th century, and that the corruption of the medieval church was both pronounced and comprehensive. Then, one day, Francis kissed a leper.