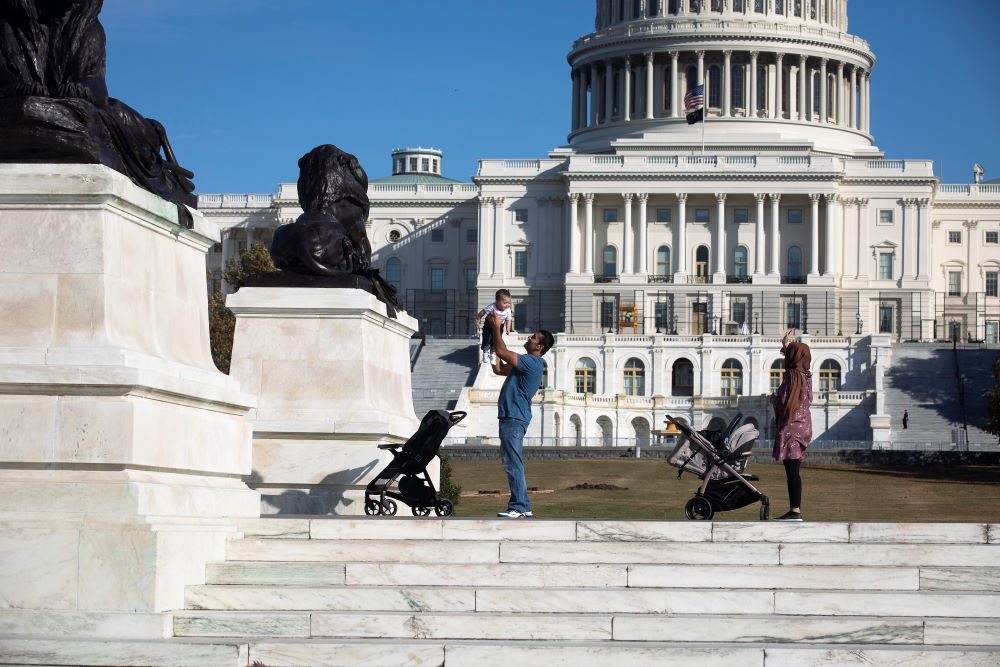 Earlier this month, Cardinal Timothy Dolan, chair of the U.S. bishops' conference's religious liberty committee, and Bishop Thomas Daly, chair of the committee on Catholic education, co-signed a letter from a group of religious organizations to U.S. Senate leaders. The letter urged the senators to amend the current draft of the Build Back Better (BBB) bill so that it does not discriminate against religiously affiliated child care providers.

Is child care to become the next battle in the culture wars?

At issue are two provisions of the BBB. First, it makes money available to improve facilities at child care centers, but not if they are in a building whose primary purpose is religious. As Patrick Brown of the Ethics and Public Policy Center and the University of Virginia's W. Bradford Wilcox explained in an op-ed in the Deseret News, the bill:

would provide funding for child care providers to improve, expand or retrofit their facility to serve more kids. Unless, of course, that facility is, in the words of President Joe Biden's plan, "used primarily for sectarian instruction or religious worship." Sorry, St. Joe's or First Presbyterian — the for-profit provider down the street can access government dollars to increase the number of children it serves, but you can't.

I do not see why it would be impossible to segregate funding that goes to improve a venue that is used for child care while not providing federal dollars to, say, build a new altar or refurbish the pipe organ. The lines drawn are always a bit arbitrary: After all, we Christians believe our God is present where two or three are gathered in his name, whether that be in a church proper or in an adjacent auditorium.

For example, according to the National Catholic Education Association, there are currently several federally funded programs that include Catholic school students or personnel, but the limits set by the U.S. Supreme Court in the 1971 case Lemon v. Kurtzman are quite stringent.

Subsequent Supreme Court decisions, most especially the 1983 decision in Mueller v. Allen, took down some of the higher bricks in the wall of separation between church and state, and allowed tax incentives for people to donate to scholarship funds, which, in turn, are used to pay tuition expenses at religious schools. Such programs, the court held, were "neutral" — that is,  they did not have the primary effect of allowing the government to advance a sectarian goal but, unlike a total denial of any aid, did not discriminate against parents who wanted a religious education. Programs like the Invest in Kids' Act in Illinois revolutionized the funding for Catholic schools in that state where Chicago's archdiocese maintains one of the largest private school systems in the country.

In short, religious schools were treated more and more like religiously affiliated hospitals. Parents, like patients, are not penalized for choosing one option over another, and the government funding does not go directly to the provider, so the excessive entanglement the court worried about in Lemon is avoided.

There is a lot to be said for strict separationism. Whatever else it does, it enlarges the arena of freedom.

This brings us to the other issue with the BBB law, which is that the higher salaries proposed by BBB, and federal subsidies to pay for those salaries, will come with all manner of strings, from mandated curriculum to nondiscrimination provisions. He who pays the piper calls the tune, right?

Brown and Wilcox want the child care aid to build exclusively on the voucher model, so that there are fewer, if any, government strings. They know, too, that the current composition of the Supreme Court is likely to be even friendlier to religion than was the Burger court in 1983.

It is expecting a lot of taxpayers, however, to fund religiously affiliated education programs that, for example, routinely fire gay staff or encourage gender roles that are traditional but not doctrinal or advance ideas about government that are hostile to democracy. (I hope, however, no one teaching 3-year-olds is going to be advancing any ideas about democracy one way or the other!) And taxpayers will notice that the relationship between religious identification and political affiliation has become so predictable that political neutrality, as well as religious neutrality, is at issue.

What is more, the strings which some conservatives fear might come from a Biden administration would be different from the strings liberals might fear coming from a Trump administration. There is a lot to be said for strict separationism. Whatever else it does, it enlarges the arena of freedom.

There is also a lot to be said for allowing many flowers to bloom in the education garden. Why should child care providers all have to be the same? Yes, they all should have to demonstrate that the children will be safe, that the facilities are not dangerous, but does it harm our society if the Methodists have a successful child care program that gets federal money? If you do not want your children to learn all those Wesleyan songs, send them somewhere else!

There are limits, however. Those who genuinely care about and are committed to the Catholic tradition should be worried that religious liberty is now invoked by some to justify a parallel subculture. We admire the Amish, we do not imitate them.

Catholic education can have no part in, and derive no benefit from, the "Don't Tread on Me" libertarianism that has so afflicted the country. Our understanding of religious liberty is not that we have license to do whatever we please so long as we cloak it in religious garb. Our understanding should be that, mindful of the common good and the transcendence of the human person, religious freedom allows people to ask how people with diverse faiths, interests and perspectives can best live together peacefully, what we owe those with whom we disagree in a pluralistic society, and how we guard one another's right to search for the answers to such questions.

Whatever principles are at stake, politically it will not help Sen. Joe Manchin get reelected if dozens of religiously affiliated child care centers are squeezed out of business. Those on the left who can't help scratching that totalitarian itch to demand conformity to their social and cultural agenda will misfire — better to say, continue to misfire — and Democrats like Manchin will be replaced by Republicans in the mold of Sen. Josh Hawley. Who does that help?

I hope the Senate will amend the bill to make it easier for religious affiliated child care centers to flourish.

I hope, as I have argued before, that our Catholic leaders will create administrative law provisions to guarantee basic employee rights at Catholic institutions under canon law.

I hope that our country will treasure its tradition of robust religious liberty.

Finally, I hope that issues like federal aid to child care will not become fodder in the culture wars that corrode our politics and our faith. We have to find workable compromises to these kinds of policy disputes, not simply go on beating each other up over them.