by Michael Sean Winters
Opinion
Politics
This article appears in the 2017 in Review feature series. View the full series. 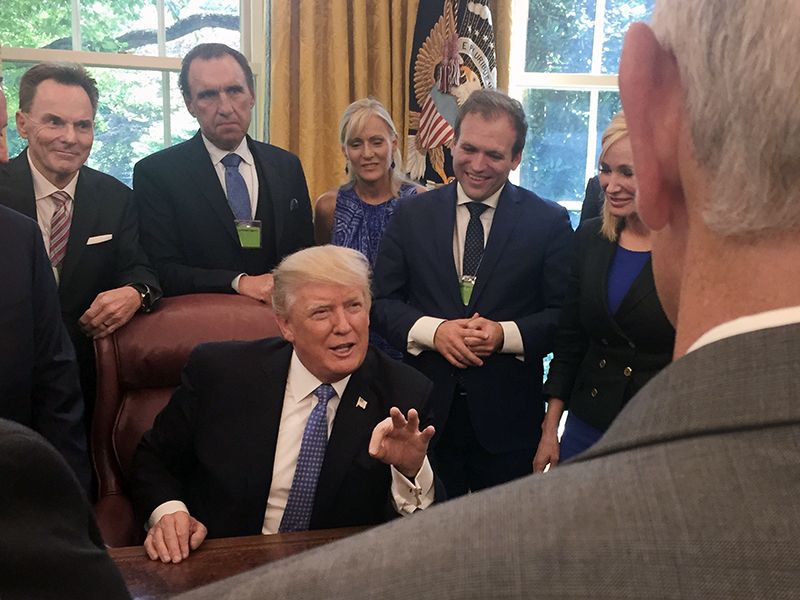 Johnnie Moore, top right, stands behind President Donald Trump as he talks with evangelical supporters in the Oval Office at the White House. (Photo courtesy of Johnnie Moore)

More fascinating than the nation's politics or the ecclesiastical developments of the year 2017 was the estuary where politics and religion collide in American life.

In one sense, the estuary had all the symmetry and direction of a Jackson Pollock painting, and the face of Christianity in the political life of the nation was a hodgepodge that did not show any dramatic changes akin to those President Donald Trump has affected in the political sphere. But, the important thing that happened this year was a new focus not on the role of religion in politics but, instead, the influence of politics in religion, and that is very important for us Catholics.

First, let's examine the role of religion in politics. The religious right has been the dominant face of religion, or at least of Christianity, in the public square since the 1980s when the Rev. Jerry Falwell and his Moral Majority organization brought the logic and the language of evangelical fundamentalism into political discourse. If in 1965 the most prominent Christian minister was the Rev. Dr. Martin Luther King, Jr., in 1985 it was Falwell. At year's end, Judge Roy Moore embodied this tradition, but throughout the year, a coterie of evangelical leaders who support and advise Trump — some like Johnnie Moore who got his start with Falwell and Jerry Falwell Jr. as well — were the most recognizable Christian voices in the public square.

The religious right hit a big bump in the road at year's end in the person with Moore. He was their champion for placing a monument to the Ten Commandments on the grounds of the Alabama Supreme Court and defying the Supreme Court's ruling on same-sex marriage, but credible allegations that Moore had harassed teenage girls when he was in his 30s tarnished his reputation, and the willingness of the religious right to stick by Moore tarnished the entire brand. Can you imagine if he had won? He would have instantly become the face of religion on Capitol Hill and it would have been ugly for the rest of us. Moore's loss, however, does not mean the religious right has lost its influence, certainly not with the president nor with a GOP primary electorate.

The Christian left has no organized influence akin to that found on the right. Groups like Faith in Public Life, Sojourners or Network operate within the Beltway, amplifying arguments found in the secular left, and doing so in religious language. They do not have the kind of grassroots organization outside the Beltway that could influence an election. Catholics in Alliance for the Common Good once aspired to that kind of role, but it seemed to have closed shop in 2017.

In North Carolina, an interfaith group of pastors started Moral Mondays, in which they lobbied at the state capitol on a range of social justice issues. They lobbied in favor of voting rights and against cuts in programs that assist the poor. Regrettably, they did not support restrictions on abortion, which undercut their moral stance in the eyes of many conservative and moderate fellow Christians.

The efforts to restrain conservative political forces from dominating the internal intellectual life of the church must not consist in an attempt to import and baptize liberal political preferences.

Very much like their counterparts on the right, I know of no religious organization on the left that is willing to consistently challenge the secular left on any substantive issue, which further diminishes their distinctiveness and force. This is, I fear, a result of the reality of fundraising needs for religiously-themed organizations that do not have extensive mailing lists of small dollar donors. The amount of time and attention some progressive religious groups have spent on transgender issues is not a function of fidelity to the Christian Gospels. It is a function of satisfying funders.

The most interesting, and potentially far-reaching, development in the religiopolitical estuary came to us from the Fourth Estate, specifically here at the National Catholic Reporter and also at La Civilta Cattolica. Instead of looking at the influence of religion in politics, three stories looked at the influence of politics in religion.

Last May, Tom Roberts filed an extensive report on the Knights of Columbus and the groups they support. He "followed the money," and looked at their 990s, the tax forms non-profits are required to file. It should not surprise that they fund rightwing groups, but it was surprising that they fund groups that have no particular religious affiliation or agenda. The Supreme Knight, Carl Anderson, is a former Republican political operative so perhaps we should not be surprised. Many people, including prelates, were also shocked to learn that Anderson is paid more than $2 million a year.

Earlier this month, Roberts filed a follow-up story that looked at other wealthy Catholics and the groups they fund. Tim Busch, founder of the Napa Institute, is the most outrageous of the group: He gave a ton of money to Catholic University of America for its business school, which is now named after him and his wife. The school puts the "lazy" back into laissez-faire and recently held a lovefest for libertarian guru and climate change denier, Charles Koch. Sean Fieler funds a wide variety of conservative organizations as does Frank Hanna . Hanna is a big fan of the Acton Institute, the rightwing activist organization led by Fr. Robert Sirico that is so far astray from Catholic social doctrine, it is a scandal.

And, of course, last summer's essay "Catholic Integralism: A Surprising Ecumenism" by Jesuit Fr. Antonio Spadaro and pastor Marcelo Figueroa, in La Civilta Cattolica, examined the alliance of conservative Catholics and evangelicals around an explicitly political program, as opposed to traditional ecumenism that fosters dialogue between Christian denominations of a more theological nature. The firestorm that erupted after the publication of the essay only proved that Spadaro and Figueroa had struck a nerve.

To be clear: These three articles did not focus on conservative theology becoming dominant within the church. They focused on external political agendas becoming dominant within the church, with the partisan cart overtaking the theological horse. And, in the case of the Napa Institute, Busch school and Acton Institute, this is about ideologies that are inconsistent with Catholic social teaching trying to stake a claim as legitimate expressions of Catholic social thought. They are not.

In ways large and small, a cadre of wealthy and well-connected Catholics have dragged the church down so that our church appears narrow, judgmental, and obsessed with sexual mores, while ignoring other clamant social needs such as preserving the environment, protecting immigrants, and helping the poor. Throughout the 20th century, no one mistook Catholicism for the kind of evangelical politics we associate with the Scopes Monkey Trial and the Moral Majority. In the 21st century, it is six or one-half dozen. That is how many, especially many young people, view religion in the public square. Worse, these conservative politico-Catholics seek to remake the church in their political image too.

Standing athwart this conservative political agenda is Pope Francis and the vision of a Catholicism engaged with the poor he is proposing. He is aided by prominent prelates who share that vision and wish to present a different, less scolding face in the public square: Cardinals Blase Cupich, Sean O'Malley, Joseph Tobin and Donald Wuerl are known as the Francis' "quartet" in the U.S. and while each has a very different personality, each has embraced this papacy with gusto.

The efforts to restrain conservative political forces from dominating the internal intellectual life of the church must not consist in an attempt to import and baptize liberal political preferences. The effort, instead, must be to discern how the ambient political culture can impact the church in healthy and non-divisive ways, as well as how the church can serve as leaven in the broader culture.

The Catholic Church cannot become the Republican Party at prayer. Nor the Democratic Party. The partisan divisions in our culture, which are deeper than mere partisanship and extend to geography, socio-economic status and education levels, must not be allowed to overtake the life of the church.

The estuary, then, has been fascinating as it usually is, but the most important change in 2017 was a change in focus, from looking at how religion influences politics to examining how politics is influencing religion.