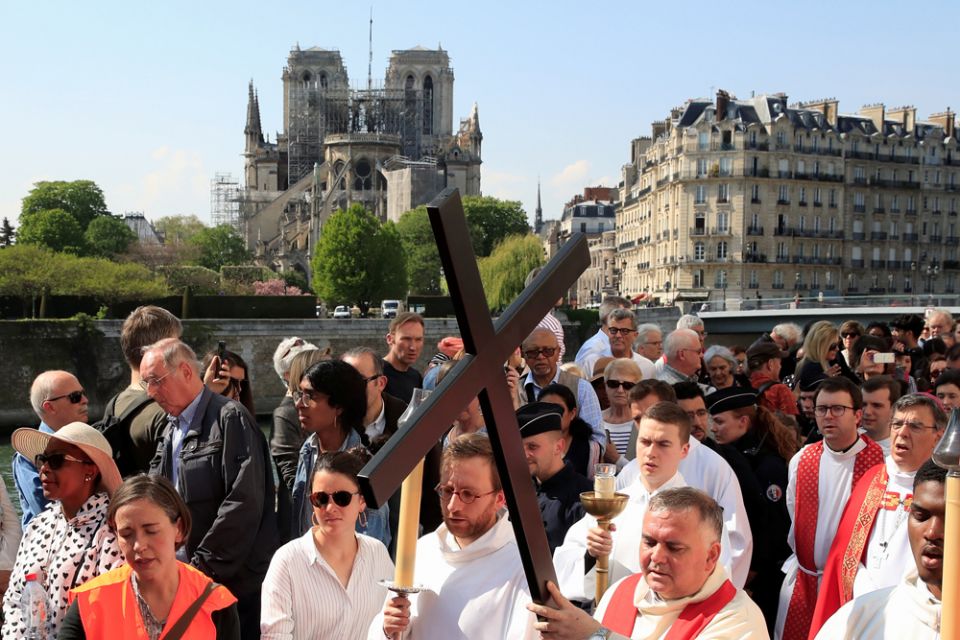 The discussion about restoring Notre Dame Cathedral in Paris will likely contain as many misbegotten notions as did the immediate interpretations of what the destructive fire meant as a metaphor for our civilization. I have already discussed this latter muddle, most of it bad theology, here.

An essay in The New Yorker by Thomas de Monchaux is a good place to start when considering what approach to take to restoring Notre Dame, starting with the question of whether or not the word "restoration" is even appropriate. As he points out, the word was defined by Eugène Viollet-le-Duc, the man who built the famous spire that crumbled in the fire in the mid-19th century, thusly:

Both the word and the thing are modern. To restore an edifice means neither to maintain it, nor to repair it, nor to rebuild it; it means to reestablish it in a finished state, which may in fact never have actually existed at any given time.

Viollet-le-Duc was fiercely criticized for the liberties he took in restoring Notre Dame in the 19th century. He did not follow the original plan for a larger, stone spire at the crossing, where the nave and the transepts intersect, nor did he model his slender lead spire after a previous one that had crashed the century before. What he produced was new. Also, beautiful.

The fear that I suspect many of us felt when the French Prime Minister Edouard Philippe announced an international competition for a new spire was that our age is incapable of designing something beautiful. Medieval architects were acutely aware of the need to integrate form and function, but only we moderns distinguished the two as distinct efforts and made the former take its cues from the latter. It is this abstraction of the two key tasks of the architect, one functional and the other artistic, and their separation even in mind, that has visited much hideousness upon our cities and our culture.

There is a different abstraction that is, in a case like that of Notre Dame, useful, and it was raised in an entirely different context: Leon Wieseltier's essay "After Memory" written on the occasion of the dedication of the Holocaust Memorial Museum in Washington, D.C. Unlike the survivors of the Holocaust, for whom escaping the memory of the horrors they endured would be a blessing, our horror at the fire at Notre Dame is small beer. But, the tension between memory and history is present. We may not want some modern monstrosity, the product of a "competition" but we also know that we do not want some anaesthetized, formulaic effort to mimic what was destroyed.

Wieseltier wrote of the effort, begun in the 17th century and culminating in the 19th , to free humankind from "the burden of the past," the birth of modernity, and specifically the desacralization of sacred texts by employing the tools of history. But, by the time Viollet-le-Duc was erecting the spire at Notre Dame, historicity had exhausted itself:

The deposing of the sacred in the name of history ended in the sacralization of history. History became God, the nineteenth and twentieth century's paltry contribution to the ranks of the divine; but this was a God that did not address, that could not be addressed, that was trapped in time, that never intervened except as "development," that seemed to justify any conceivable human outcome. Historical awareness became merely a modern kind of dogma; and the scholarly study of history came to seem like a desiccating activity, a means for depleting the primal energies of individuals and peoples. History seemed to lack the vitality of memory. Historiography seemed unable to nourish, to transmit the traditions that it studied to the generations that awaited them. Suddenly the past was not the danger, the past was itself in danger. And the "burden of the past" was not the problem; the real problem was the burden of the burden of the past: the dourness and the dutifulness of the historical attitude, the sense that all that remains for the heirs of the past is to recover and to record, to be grateful and custodial.

There are plenty of beautiful modern buildings, even some beautiful modern churches, and they capture something of the divine. St. Mary's Cathedral in San Francisco, maligned as "St. Maytag" by those who think its exterior resembles a washing machine's agitator, is a beautiful building. So, too, is the Basilica of the Sagrada Família in Barcelona, Spain, or the Thorncrown Chapel in Eureka Springs, Arkansas, and the First Presbyterian Church in Stamford, Connecticut. But, sometimes the effort to traffic, not in the modern but in a mishmash, falls flat: The Basilica of the National Shrine of the Immaculate Conception in Washington, for example, is an unfortunate piece of architecture. And, there are modern churches that are simply ugly.

I used to think that architecture was the closest to craft of all the arts, less capable of enacting the artist's vision because of the needs of utility. A building, after all, must stand. I have come to realize that the laws of engineering are as the laws of the geometry which govern the composer — she may choose what notes she wants, but an octave is an octave. Or the laws of the human body and of gravity with which the choreographer must reckon. The architect can push the engineering envelope as the choreographer can push his dancers, but there are limits that cannot be ignored without courting failure.

All art, like our Christian faith, deals with transcendence and otherness. The artist must become intimate with both if the art is to succeed and achieve beauty. It is this double intimacy that gives religious art its special power to generate wonder in those who view it. My only criticism of the fine essay by de Monchaux is that it failed to recognize the religious character of Notre Dame, and the need for the worshipping community to be a part of the inspiration for its restoration. The great cathedral along the Seine is and always will be a great work of art, but it is so because it is a place where God is worshipped. Without the sacraments and the prayers that happen inside its walls, and under its soon to be recreated roof, it is just an oddly shaped old building, beautiful perhaps, but not the thing that has, through the centuries, made such an abiding impression even on those who do not believe. Whoever is entrusted with the task of rebuilding must see in their work an act of worship, as well as a work of art, or it will be not be true to the beauty that is Notre Dame.