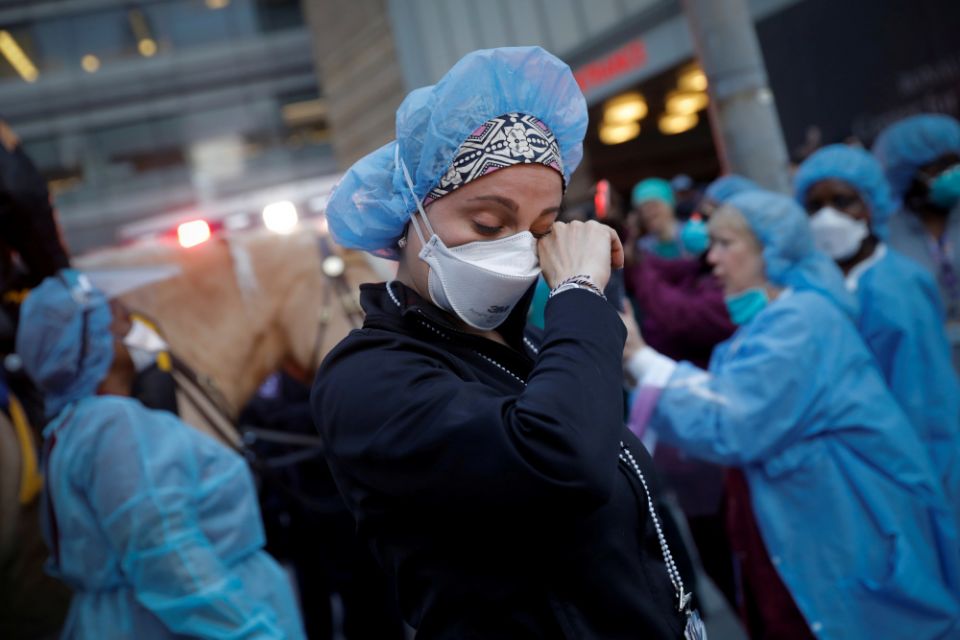 A nurse in New York City wipes away tears as she stands outside NYU Langone Medical Center as New York Police Department Mounted Police and other units came to cheer and thank health care workers April 16 during the coronavirus pandemic. (CNS/Reuters/Mike Segar)

Democratic Party sources all have one question for their presidential nominee, former Vice President Joe Biden: where the hell are you?

Every night, President Donald Trump goes to the rostrum at the White House press room and does what he does best: dominates the news cycle, blames the media for asking tough questions which he labels "fake," makes things up as he goes along, tags China as the culprit in this whole mess even though his own lateness to the cause of mitigation through all of February and into early March ended up requiring more draconian measures, he vacillates between calling for bipartisanship and dumping on Democrats, and on and on and on. Those of us who dislike the president find ample reason to confirm our dislike, and those who like him find ample reason to confirm their like. What he is doing is setting the terms of the November election.

It is time for Biden to step up and start shaping the election on his terms, and the terms suggest themselves. Once you get past the various prognostications, all of them more or less built on sand, about what our society will look like on the other side of COVID-19, one thing has become glaringly obvious about our society right now: We are learning to recognize that the truly essential people in our nation are the farmworkers, and the nurses, and the people who clean hospitals and grocery stores, and the clerks who stock grocery store shelves, and the truckers who bring goods to those grocery stores and supplies to those hospitals, and the social workers, and the bank tellers, and the school teachers, and so many others who are still showing up to work every day to keep America safe or whose sudden absence has made the rest of the country desperate for their return.

And we are learning that millions of people, especially those in the hospitality industry, are out of work. The societal myth that waiters and bartenders are really students paying their way through college is just that, a myth. In most restaurants, waiters are moms or dads. Maids who clean hotel rooms tend to be low-skilled immigrants willing to work for low wages. For every star chef, a hotel or restaurant kitchen employs dozens of low-skilled workers who unload deliveries, peel potatoes, reduce sauces. Many of them are heads of households, not college students, and others are working in the hospitality industry as a second job, a job they need to pay the bills.

In short, the country is learning what every restaurant manager has long known: The most important person in the business is the dishwasher. If a waiter calls out sick, every other waiter picks up an extra table. If the bartender's car breaks down, the service bartender takes her place, and the waiters help out with the service bar. If one of the line cooks is out, the others do their best to make up the work and the host slows down the seating. If the host doesn't show, the waiters take turns seating people when it is slow and the manager steps in when it is time to start a list. But, if the dishwasher doesn't show, and you do not have clean plates and glasses, the whole thing stops. The lowest paid worker, the one whose job performance requires the fewest skills, turns out to be the most essential person in the entire restaurant. 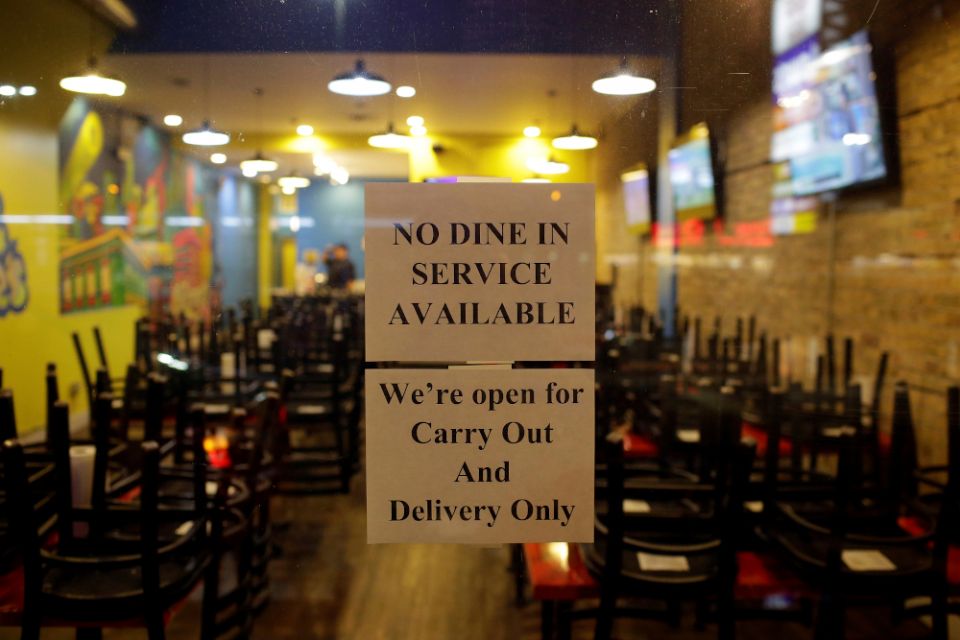 Signs are displayed on the window of a Chicago restaurant March 16 to inform customers that the dining area is closed as part of efforts to combat the spread of coronavirus. (CNS/Reuters/Joshua Lott)

"The stone which the builders rejected," the psalmist sings, "has become the cornerstone." The Blessed Mother adds her voice:

He has shown the strength of his arm,

he has scattered the proud in their conceit.

He has cast down the mighty from their thrones,

and has lifted up the humble.

He has filled the hungry with good things,

and the rich he has sent away empty.

Joe Biden needs to become the champion of America's workers. He needs to reach out to the nurses' unions and to the Teamsters and to the United Food and Commercial Workers and Unite Here culinary and hotel workers and the police unions and the teachers' unions and the government workers' unions. He needs to unveil policies that will reward these workers as they deserve and tout his long record of support for their rights. He needs to condemn any distribution of stimulus monies that go to CEOs and stockholders but leave the workers out in the cold. He needs to join governors of both parties in demanding the protective gear that frontline workers need. He needs to champion higher wages for noble work and for hard work. He needs to roll out a plan for those kids who do not go to college, as well as a plan to help shrink college debt.

Biden's empathy is unquenchable, but the workers of this country do not need someone who can feel their pain.

The economic meltdown brought on by the virus and by Trump's refusal to take forceful action through the entire month of February will require a 21st century equivalent of the New Deal. Either the government will step in and help the American people get back on their feet or, if Trump is reelected, we can expect more trickle-down economics in which the rich and the well-connected are fed first and the rest of us get crumbs from the table. Unless Biden begins showing up and articulating his vision for a post-virus, pro-worker America, we all need to start preparing ourselves for a diet of crumbs.

Every great city on the coast and every rural hamlet in the Midwest is feeling the pain. Biden's empathy is unquenchable, but the workers of this country do not need someone who can feel their pain. They need a champion who will fight for an improvement in their livelihoods and defend their rights and make sure they are not stuck footing the bill for a stimulus that helps the rich and the powerful. They need Joe Biden to come out of his basement and come out swinging.

A version of this story appeared in the May 15-28, 2020 print issue under the headline: Crisis gives Biden his campaign theme .