Medicare for All CROP.jpg 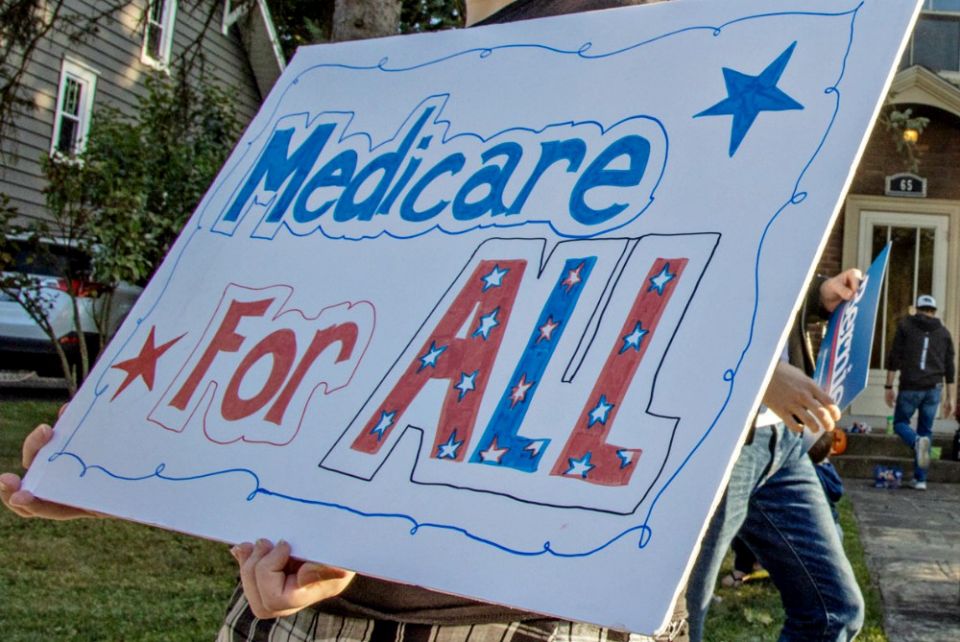 A "Medicare for All" sign is seen in Westerville, Ohio, Oct. 15, the day of the Democratic primary debate at Otterbein University. (Flickr/Becker1999)

"I am not a member of any organized political party," Will Rogers famously observed. "I am a Democrat." This year, however, the Democrats are organizing themselves into two camps, and they had better learn quickly not to attack each other too nastily or they could lose the opportunity that awaits to defeat President Donald Trump and the Republican Party next year, and to defeat them badly.

The first team is the "No, we can't" wing of the party, and its co-captains are Sen. Amy Klobuchar of Minnesota and Mayor Pete Buttigieg of South Bend, Indiana. I am reasonably confident will.i.am. is not working on a musical rendition of one of their speeches. During last week's debate, both Klobuchar and Buttigieg attacked Vermont Sen. Bernie Sanders and Massachusetts Sen. Elizabeth Warren over the latter's "Medicare for All" proposal.

The key problem with those attacks was this: They did not offer an alternative plan to achieve universal health insurance or a lowering of costs. They said that Medicare for All could not be achieved politically.

Buttigieg's "Medicare for All who want it" is too cute by half, a mere repacking of the public option. Klobuchar calls for several changes that were left on the cutting room floor during the drafting of the Affordable Care Act. And both candidates were willing to fib by saying that Medicare for All would rob the American people of the right to choose their health insurance plan. In fact, most people do not choose their insurance plan; their employer chooses. And why must they beat up on Warren by insisting she use the word taxes to describe potential financing of her plan? That is Republican messaging, and they should stop it.

Former Vice President Joe Biden sometimes joins the "No, we can't" camp, and he did on the issue of health care, questioning the cost of Medicare for All. Surely, he knows as well as anyone that if we remain with the private health insurance system we have now, costs are likely to go up even more.

Biden most often, however, is running on the strength of his experience. To be sure, the former vice president and senator for more than 30 years has the most experience on the stage. But if that were enough to win an election, President Hillary Clinton would be planning her re-election campaign.

The other team, co-captained by Sanders and Warren, is the "I dreamed a dream" team. They make the mistake of thinking that most Americans approach an issue like health care with a set of bifocals, the upper part bringing macroeconomic issues into focus and the lower part looking to the example of other countries. I say this is a mistake because it is not the way you roll out a policy that touches people's lives so intimately.

For starters, Americans do not care how other countries do it, and when Sanders lists those countries with a single payer system, he stops short of making a crucial point: Medicare for All is not a government takeover of the health care industry. It merely replaces the insurance industry.

Similarly, Warren has announced that, after being pummeled in last week's debate for refusing to utter the "T" word — taxes — she is soon going to release a plan explaining how she will pay for her proposal. I do not think that is the most urgent task in her pitch. She and Sanders need to introduce a sense of Rooseveltian pragmatism into their discussion of the issue, maybe implement Medicare for All in stages, with a pause to assess how it is working. The wildly different cost estimates for the program would be sufficient reason to suggest such a staggered implementation.

A reminder: Catholic social teaching is unambiguous on this point. Access to health care is a basic human right. Prudence is involved in deciding how to deliver such care, but any plan that stops short of that goal is morally suspect. I do not expect to see Sanders or Warren citing St. Pope John Paul II on this point, or Pope Francis, but they could.

Sanders' campaign has rebounded from his health scare, with a huge rally in New York City at which Rep. Alexandria Ocasio-Cortez endorsed him. I do not think endorsements count for much these days, but it allowed the campaign to dominate the news cycle for 24 hours.

Warren now has to cope with the focus of being a front-runner and we will see if she can handle the spotlight. I have seen some articles arguing that Buttigieg and Klobuchar are getting a second look after the most recent debate, and there is one new poll that shows Buttigieg picking up support in Iowa, a state in which he has been campaigning a great deal. I still think they need Biden to falter to catch up to Warren.

The good news is that the American people lean left on economic issues even while they tend to be more conservative on social issues, and the debates so far have been dominated by economic issues. The first openly gay candidate for the presidency rarely mentions his sexual orientation on the debate stage. Abortion is barely mentioned, although it will doubtlessly loom large because the Supreme Court will be ruling on a case that would allow them to overturn Roe v. Wade. But by then, all the Democratic candidates will have made their first impression on the electorate.

If the two teams come together around the concept of fighting for dreams, but fighting pragmatically, touching two of the most prominent parts of the American psyche, the party could win and win big next November.