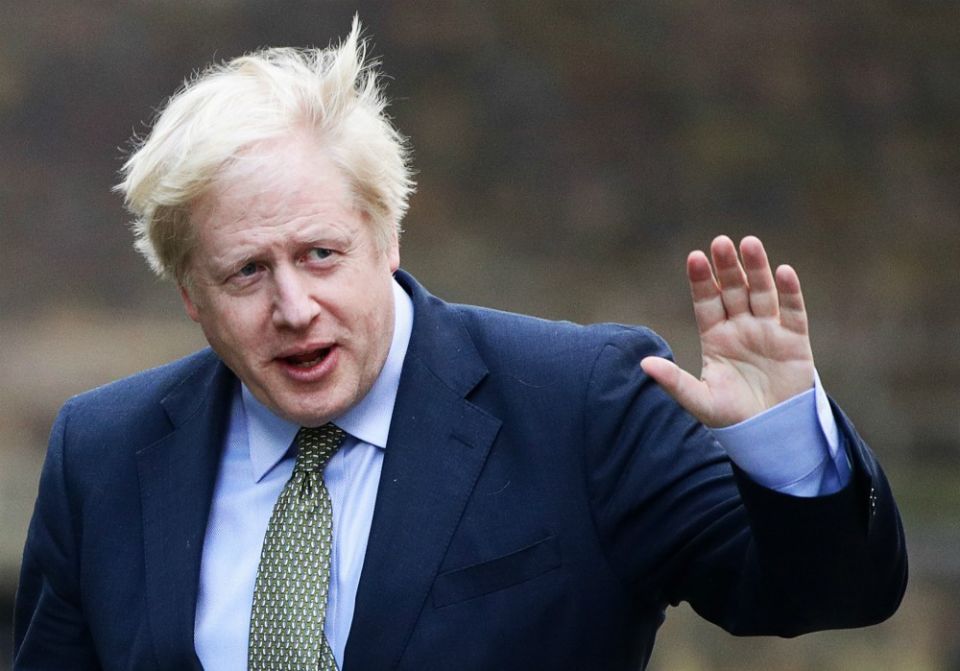 British Prime Minister Boris Johnson waves after meeting with Queen Elizabeth in London to ask for permission to form a government Dec. 13. In the Dec. 12 general election, Johnson's Conservatives won a majority of 80 seats, the largest for his party since Margaret Thatcher won a third term in 1987. (CNS/Reuters/Lisi Niesner)

What to make of an article in The New York Times about the degree to which the election results in the U.K. are a warning to Democrats not to move too far to the left, in which the first people quoted are, in order, former Vice President Joe Biden, former New York City Mayor Michael Bloomberg and South Bend, Indiana, Mayor Pete Buttigieg, all candidates running as centrists. And then to whom does the Times turn for expert commentary? Former Chicago Mayor Rahm Emanuel and longtime Democratic strategist James Carville.

"You can go so far left that you can lose to an unacceptable incumbent," Carville told the Times. "That's the lesson. The lesson is screaming right in your face."

Then the reporters added more commentary from the three centrist candidates. Twitter abounded with similar comments, as did many talking heads on the evening news shows.

My colleague at Commonweal, Matthew Sitman, had a fine rejoinder to this kind of nonsense on Twitter: "I never finished my PhD in political science, but it is true that the first lesson they teach you in grad school is that a small island north of Europe in terminal decline predicts everything that happens in the US 100% of the time."

Obviously, there have been candidates whose embrace of extreme positions cost them an election, usually by a landslide. Barry Goldwater in 1964 and George McGovern in 1972 are the most obvious stateside examples. Even these domestic analogies are complicated: Goldwater and McGovern were running against incumbents who were generally middle-of-the-road ideologically, at a time when party structures were still robust, while the Cold War was still raging, before campaigns became so hideously expensive, when the parties were not so ideologically cohesive, etc.

One of the problems with drawing facile lessons from last week's British elections is that elections are choices and while getting Brexit done was the central plank in Prime Minister Boris Johnson's campaign platform, he also pledged to invest millions more pounds in the National Health System, a genuinely socialized medical system that the U.K. has had since the 1940s.

In the U.S., no candidate is advocating the government take over health care. Medicare for All does not represent a takeover of the health care industry, only of the health insurance industry. In the U.K., doctors and nurses really are government employees. In either Sen. Bernie Sanders' or Sen. Elizabeth Warren's Medicare for All plans, the government pays the bills, but it does not run the hospitals or private practices. Those seeking to analogize across the Atlantic cannot ignore such fundamental differences.

It is true that getting Brexit done was more than a policy position. It touched on nationalist impulses to some degree and, like today's GOP, was not afraid to stereotype in ethnic and racial prejudices. But as one friend who was in the UK for the elections explained to me, he was surprised at the degree to which Brexit touched very old attitudes of hostility toward continental Europe. I do not know any Frenchmen who still refer to the U.K. as "perfidious Albion" but there are mutual resentments rooted in the politics of the Reformation and the end of the Stuart dynasty that have no corollary in the U.S.

For every American who thinks immigration is threatening our way of life, there is an American who thinks immigrants are the very essence of America's history and future. In the postwar era, we Americans have been dominant in our alliances, while Britain has experienced nothing but a sense of decline. They had debates about maintaining their national currency unknown on our shores. Our immigration debate is somewhat like their Brexit debate, but also somewhat unlike.

The undeniable lesson of the U.K. election for Americans is that it is a truly bad idea to waffle and equivocate on the most pressing issue of the day, which is exactly what Labour Party leader Jeremy Corbyn did on Brexit. People who are anxious about their socioeconomic and/or cultural status will not rally around a waffler.

And, what is more, his waffling allowed the Conservatives to establish a narrative about the source of economic pain — "It's the EU — the foreigners" — that went unchallenged. The Conservatives were never as explicitly racist as President Donald Trump, to be sure, but there is a lesson here. In 2020, Democrats must not ignore racist narratives, as the Labour Party did, nor condemn the people those narratives are aimed at, as Hillary Clinton did, not if they hope to win a national election.

Many commentators have pointed to Corbyn's historic sympathy for the Irish Republican Army as part of his comprehensively leftist stance. In The Week, Noah Millman wrote, "[The left] cannot move to the left on every issue simultaneously, and they cannot run a campaign that actively alienates voters who live outside the major metropolitan areas. To win a hearing on any issues where they do want to move left, they have to earn the trust that they will stand for, and listen to, the entire nation, not just the portion of it that is culturally congenial."

All true. Milliman failed to note that the many of the economically struggling constituencies that flipped from Labour to the Conservatives typically sent more of their young people into the military services than other parts of the country. The Democratic candidates staff their campaigns with successful young people drawn from the culture elites in this country. A disproportionate share of our military men and women come from struggling rural areas. Such gaps in experience are an invitation to electoral disaster.

Campaigns are about issues, but they are also about candidates.

One of the commonalities between Johnson and Trump is, as a friend put it to me, they both appear genuine, even when they are lying. This has always been part of Trump's success. People claim Warren started to drop in the polls because she embraced Medicare for All, or because she put forward an implementation plan that was less immediate than the plan put forward by Sanders. Hogwash. Warren's unwillingness to answer a direct question about raising taxes to pay for Medicare for All during the debate, the equivocation she displayed, that is what started her decline in the polls.

The botched, two-part rollout of her eventual plan did not help. How many people have read her plan? A few thousand? A few hundred? Millions watched her equivocate on the debate stage. She has time to regain her footing, to be sure, but it is Sanders, more than any Democrat, who possesses the capacity to appear genuine that Johnson and Trump display.

History consists of making comparisons across centuries. Comparative political analysis should make comparisons among nations. But just as history is the one thing that does not, actually, repeat itself, political analysts need to attend to the particularisms of the phenomena they are comparing or else they will distort the analogies they draw. There were lessons to be drawn from the U.K. elections. Shame you couldn't read about them in the Times.

Who holds the Catholic key to Florida's 2020 election?