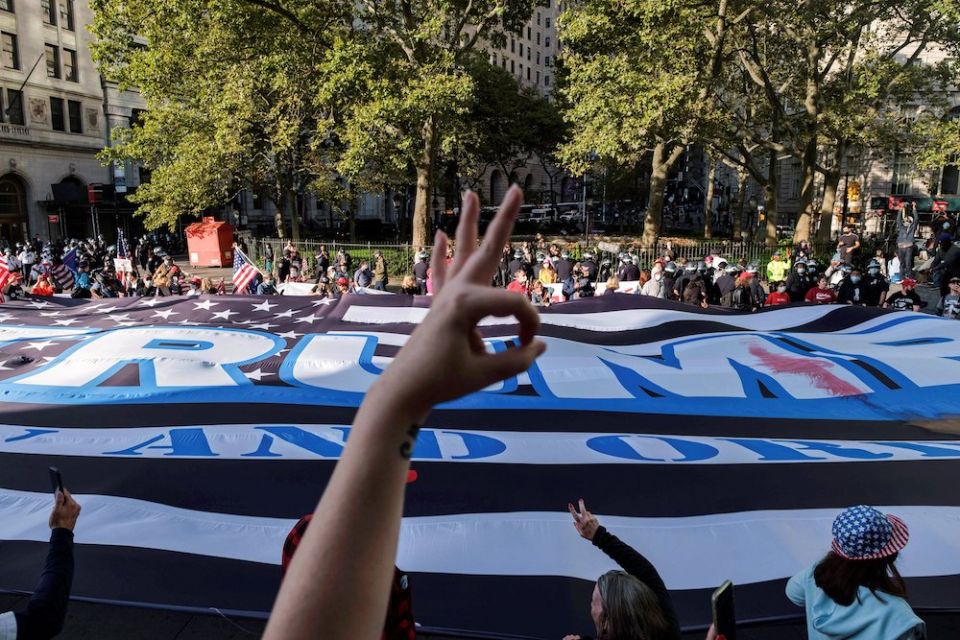 Supporters of President Donald Trump march in New York City Oct. 21. The hand in the foreground is making a gesture used by those on the right and sometimes by extremists or white supremacists. It was added to the Anti-Defamation League's symbols database of "hate on display" in September 2019. (CNS/Reuters/Yuki Iwamura)

No one ever said Michael Warsaw was stupid. The chairman of the board/CEO of EWTN and publisher of the National Catholic Register penned a column about the forthcoming election entitled, "Voting for a Vision, Not a Person." Warsaw knows that the execrable man whose name tops the Republican Party's list of candidates this year has approval ratings that are dropping like a stone. So the only way to keep the EWTN faithful in line is to frame the election in terms that will resonate with them. For him, Trump is like the Wizard of Oz, and he wants the Register readers to "pay no attention to that man behind the curtain."

Of course, Warsaw is wrong. You don't get the vision without the person. Four more years of Donald Trump in the White House may result in more conservative, Federalist Society-approved judges on the nation's courts, but you don't get the judges without the vulgar tweets. And the failed response to the coronavirus. And the kissing up to dictators like Vladimir Putin and Mohammed bin Salman. And the accusations from more than a few women regarding sexual behavior Warsaw and the EWTN faithful would denounce as a deal-breaker if it were a Democrat who stood accused. Trump? They pronounce him a latter-day King Cyrus.

Still, I was glad Warsaw sketched the vision he believes Trump represents and that he knows his viewers will appreciate. If you ever teach a course on the hideous reduction of religion to ethics and thence to politics, this little essay could serve as Exhibit A.

The trouble starts right at the beginning when Warsaw claims:

One campaign has built itself on the notion that America is a great country, with much to offer. It embraces a vision that sees religious practice and belief in God as central to the country's private and public life. In this understanding of America, faith is not something to be defended against with a "wall of separation" designed to keep Christians out. Instead, faith — and Christianity itself — are seen as critical to the flourishing of our country in a perspective shared by many of our Founding Fathers. This was the understanding of men like Samuel Adams, James Madison, Patrick Henry and George Washington.

I believe America is a great country, too, but my understanding of greatness, rooted in the precepts of the Sermon on the Mount, differs from that offered by Warsaw and the GOP. I see America's greatness in the way it has welcomed immigrants through the years, not the way it had scorned them and abused them these past four years. I see our greatness in the ways we help those with less, not just an uptick in the stock market. I see greatness in the sacrifices and hard work of nurses and EMTs and grocery store clerks and janitors and truckers these past few months, going to work to try to save lives and keep America safe during this pandemic. Warsaw doesn't mention them or the pandemic they have helped us all navigate. The president he lauds thinks he is the only essential worker in the land.

I discern greatness in America's capacity for renewed efforts to "form a more perfect union," mindful of how often and how grievously we have fallen short of the promises our founders made. I do not see greatness in the president's repeated racist tropes.

I am not sure where Warsaw learned constitutional law, but if he knows anything about the Founding Fathers, he knows that they understood the disestablishment clause of the First Amendment, not just the free exercise clause, to be a guarantor of religious liberty. One of them gave us the phrase "wall of separation," and while the idea can be taken to extremes, watching EWTN always makes me want to build that wall higher.

Warsaw quotes the one Catholic who signed the Declaration of Independence, Charles Carroll, who wrote, "Without morals, a republic cannot subsist any length of time; they therefore who are decrying the Christian religion … are undermining the solid foundation of morals, the best security for the duration of free governments."

Perhaps if I had lived in the middle of the Enlightenment, I would not have been horrified by someone turning the Christian faith into a prop for Americanism. But we have read de Lubac and von Balthasar and Ratzinger, and so we are horrified. It is curious that Warsaw is not bothered at all by such reductionism, that he accedes to such a hyper-moralistic and Protestantized understanding of the role of religion in culture.

Warsaw goes on to mischaracterize the Democratic Party in ways that contain a kernel of truth, but only a kernel. It is true that there are some liberals who see nothing but sin and crime in America's past, but they are a minority. There are some liberals who despise Catholicism for its traditional beliefs about human sexuality and would like to marginalize the church as much as possible, but Joe Biden is not one of them. There are some liberals who put the words religious liberty in scare quotes and rate it below other so-called rights not mentioned in the Constitution, but most of us simply think that our bishops and the religious liberty advocates they employ have been acting like toddlers on the issue, refusing to take "yes" for an answer on the Obama administration's revised contraception mandate, abusing our theology to claim falsely that filling out a form to escape the mandate is itself a form of cooperation with evil.

And, yes, it is true that the Democratic Party has become increasingly extreme on the issue of abortion rights. Here is the difference. When my colleague Christopher White profiled Biden this summer, one of the co-chairs of Catholics for Biden, Stephen Schneck, made clear that he disagreed profoundly with Biden on abortion. When White interviewed longtime U.S. bishops' conference staffer John Carr about his decision to publicly support Biden, Carr made it clear that he also disagreed profoundly with Biden's stance on abortion. One of the things religion affords a thinking person is terra firma from which to critique your culture and its principal actors.

Warsaw does not once — not once!— criticize today's Republican Party or its president for any of their many policies that run directly, and obviously, counter to the teachings of the Catholic Church. Not a word for immigrants or refugees. Not a word against military spending. Not a word about growing income inequality. Not a word about anti-environmental policies. He is a shill for Trump, nothing more and nothing less.

EWTN and the Register like to fancy themselves as proclaiming "traditional Catholicism." True, there were times in our tradition when the church has compromised itself with political power, but there is another, sometimes contemporaneous history, in which the Catholic Church continually and faithfully has been a barricade against the totalizing forces of political power. For Warsaw and his media empire, tradition goes back to the 1950s and is largely about conservative sexual ethics and a penchant for more traditional devotional forms. Reading his essay, I could not suppress the question: How does one translate "agitprop" into Latin?

This — more than the candidates themselves — is what is on the ballot. You are casting your vote this year for a long-term vision of America, not for a person. Keep that in mind: Pray, and vote — for the future of your country.

Warsaw's vision overlaps with all of this and adds a heavy dose of sexual puritanism. If that is what Catholicism is all about, if that is the vision that an orthodox Christian should find compelling, is it any wonder that there are so many ex-Catholics?

If that is the vision that is truly on the ballot, I am betting the American people will decline four more years of it. They rightly see what Warsaw does not, that the president's vision is dystopian not hopeful. And Warsaw's vision is remarkable for its Manichaean view that people are separable into an all-good camp and an all-evil camp, as well as a crimped understanding of grace that is properly labelled Donatist.

Warsaw seems to think that grace can only run in the channels he has approved, but the Holy Spirit blows where it will. Certainly the Holy See should ask itself why this man with such evident sympathies for two of the most notorious heresies in church history is an official consultor to their dicastery on communications.