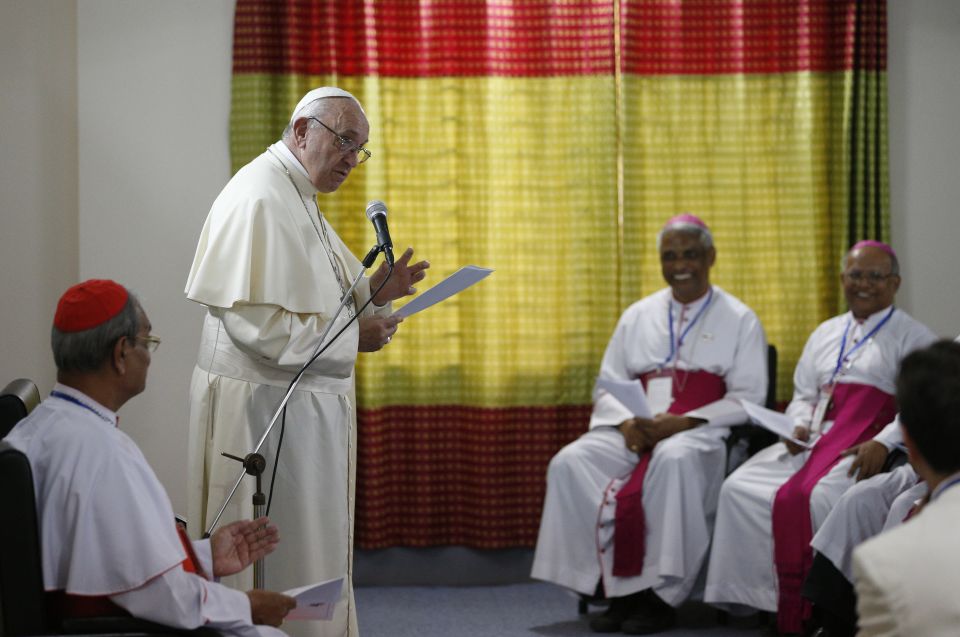 Pope Francis speaks as he meets with Bangladesh's bishops at a residence for elderly priests in Dhaka, Bangladesh, Dec. 1. (CNS/Paul Haring)

My Advent has been disjointed. At Mass on the First Sunday of Advent, the closing hymn was one of my favorites, "O Come Divine Messiah." But the editors of the hymnal had flattened out the notes in the last line, so instead of jumping an octave on the words "when hope," we merely jumped from D to G, and the sprightliness of the hymn tune was gone.

That diminished musical notation turned out to be a metaphor for a season that seems out of sorts to me this year in other ways. Normally, I do not cross the threshold of a mall or big box store during Advent, but this year, because I have moved, there are still things I need to get that I had forgotten to purchase beforehand. Last week, it was a couple of camping lights for when we lost power. Another day it was some windshield cleaner for the car. There is nothing more distressing to the soul of a Christian during this time of year than to encounter the commercial madness that has overtaken this holiday, a holiday that begins on Dec. 25!

So, I have been searching for that spiritual connection that would help me prepare for the great feast.

To the rescue comes Pope Francis. Civilta Cattolica has just published the exchanges the Holy Father had with Jesuits in Myanmar and in Bangladesh. Two questions and answers from the meeting in Myanmar helped me, and can help all of us I think, get ready for a real Christmas.

Here is the first exchange, which I quote in its entirety because it is so rich:

Question: Thank you, Holy Father, for being with us. We all live in Myanmar and you understand the situation in our country. We share the same spirituality, that of the Spiritual Exercises. Our spirituality contemplates the Incarnation which pushes us forward; it moves us to mission. We are here, and therefore we are on a mission. Contemplating the actual situation in Myanmar, what do you expect from us?

I believe we cannot think of a mission — I say this not only as a Jesuit but as a Christian — without the mystery of the Incarnation. The mystery of the Incarnation illuminates our approach to reality and the world completely, all our closeness to people, to culture. Christian closeness is always incarnated. It is a closeness like that of the Word, who comes to be with us. I remind you of the synkatabasis, the being with … The Jesuit is one who must always get closer, as the Word made flesh came close. To look, to listen without prejudices, but mystically. To look without fear and look mystically: this is fundamental for the way we look at reality.

Inculturation begins with this way of looking. Inculturation is not a fashion, no. It is the very essence of the Word which became flesh, took our culture, our language, our flesh, our life, and died. Inculturation is to take on board the culture of the people I am sent to.

And for this reason the Jesuit prayer — I mean mainly in relation to inculturation — is the prayer of intercession. It is necessary to pray to the Lord precisely for those realities in which I am immersed.

There have been many failures in the Society’s life of prayer. At first some Jesuits gave St. Ignatius a headache because they wanted the Jesuits to remain closed away and to dedicate two or three hours to prayer … And St. Ignatius said: “No, contemplate in action!” And in 1974 it was my turn to experience this. There was — as you know — a movement of the so-called “Discalced Jesuits,” who wanted a rigid, almost cloistered observance of the rules. A contrary reform, against the spirit of St. Ignatius. True prayer and true Jesuit observance do not follow that route. It is not a restorationist observance. Our observance is always to look forward with the inspiration of the past, but always looking forward. The challenges are not behind, they lie ahead.

The relationship of Incarnation to our ecclesial mission and missionary inculturation is the very heart of Christmas, no? The Word became flesh and dwelt among us. The Word still wants to take on flesh. It is we, the body of Christ, who must undertake that enfleshing. And, while we in the laity do not have the same exact duties and obligations as a Jesuit would have, this call to root our lives in the Incarnation and thence to go to the crossroads of history belongs to us as well. We also are called to immerse ourselves in the culture so that we can discern Christ's presence there. That is Christmas, the in-breaking of the divine into human history and culture, and that Incarnation becomes the very lens through which we approach the world.

And here is the second exchange, again in its entirety:

Question: I am a Jesuit in formation as a teacher and I work in a slum. People are very poor, but people there want to help each other. A girl asked me: How can I help those in need if I need help myself? I tried to give her an intellectual answer, but it did not convince me. Then someone advised me to ask the Holy Father the question.

Intellectual answers don't help. I am not an anti-intellectual, be clear! We need to study a lot, but the intellectual and abstract response in this case does not help. For a mother who has lost her son, for a man who has lost his wife, a child, a sick man … what can words do? Just a look … a smile, shaking hands, arms, touch … and perhaps at that point the Lord will inspire a word in us. But do not give explanations. And the question the girl asked was an existential question: "How can I, who have nothing, help others?" Come closer! And think about how that person can help you. Come closer. Accompany. Stay close. And the Holy Spirit — let us not forget that we have the Spirit inside — will inspire in you what you can do, what you can say. Because to speak is the last thing. First, do. Be silent, accompany, stay close. Proximity, nearness. It is the mystery of the Word made flesh. Nearness. Maybe you can tell the girl: "Be closer!" She needs closeness. And you need closeness too. And let God do the rest.

The first thing that jumps out is the phrase "But do not give explanations." It brought to mind a great scene in the book Brideshead Revisited by Evelyn Waugh, in which Charles and Sebastian are having one of their first conversations about religion. Sebastian has just come from Mass, and he tells his friend that being a Catholic can be very difficult. Charles jumps in to agree that things like the story of the birth of Christ must be understood to be bosh. Here is the exchange:

Charles: I mean about Christmas and the star and the three kings and the ox and the ass.

Sebastian: Oh yes, I believe that. It's a lovely idea.

Charles: But you can't believe things because they're a lovely idea.

Sebastian: But I do. That's how I believe.

Charles, the modern man, cannot see what faith can see, that beauty, like love, like mercy, are credible, certainly as credible as statistics or explanations. How often do we — and by we I mean those of us who write for and who read newspapers like  — let our intellectual training get in the way of a humane encounter? How often do we use our learning not as an invitation to solidarity but as a way to feel self-important? How often do we, like Charles, demand some horrible modern sign from the Lord? How often do we think sophistication is worthy of our effort, but not a simple faith?

The promise of a savior, of someone who fulfills the longing of God's people, this is what we cultivate in ourselves this Advent.

The second thing that jumps out from Pope Francis' response is the repeated emphasis on closeness and nearness. This, too, is one of the keys to our Christmas faith: As unbelievable as it seems, God chose to be close to us, to be near to us, even taking on human flesh to enter into solidarity with us and, ultimately to redeem us. This is not abstract: He came, as did we all, through the birth canal of a woman. He came into poverty of flesh as do the children born into the slums these Jesuits serve.

Jesus was born into poverty but he was also born into the richness of the promises made to Israel. Our readings from the Hebrew Scriptures in this Advent season speak of longing, of shame (which Pope Francis elsewhere in that talk explains is a grace!), of incompleteness, of preparation. The promise of a savior, of someone who fulfills the longing of God's people, this is what we cultivate in ourselves this Advent.

This year, despite all the distractions, the Holy Father's cheerful interactions with the Jesuits in Myanmar are a good place to start in preparing our hearts to welcome the Word made flesh.

Isaiah carries a timely message for us