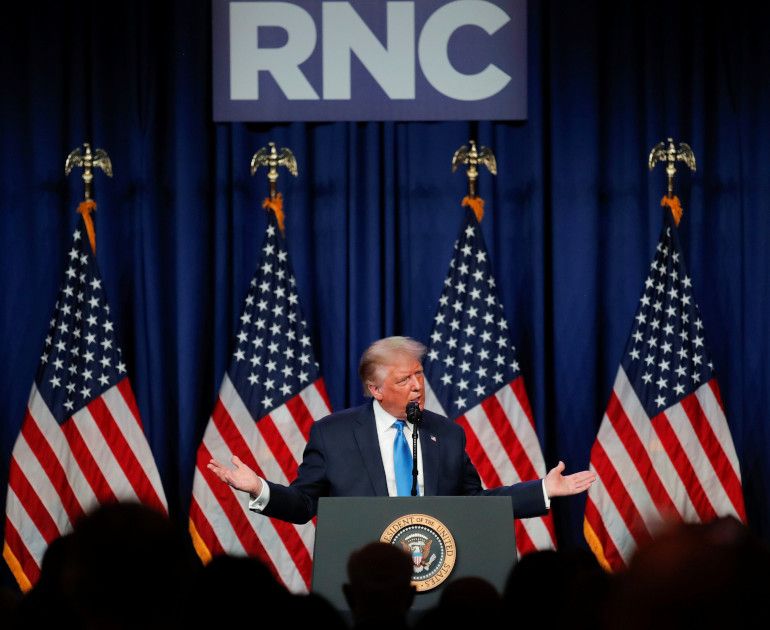 The Republican National Convention's first night was a story of mixed messages, and it began with New York Cardinal Timothy Dolan offering a prayer.

Dolan mentioned concern for "immigrants and refugees," but he did not dwell on the multiple Bible mandates to welcome the stranger. He prayed that "all lives may be protected and respected," which misses the fact that it was not a white man who had a cop kneel on his neck until he died.

Of course, Dolan mentioned religious liberty. He kept looking to the heavens, as if God lived in the clouds. A friend had a different take on Dolan's furtive glances: "It looked like a hostage video." That ambivalent quality — sycophant or hostage? — stalked the evening.

It did not take long for the main themes of the night to emerge, and first up was populism. Charlie Kirk, founder of Turning Point USA, complained about elites, the "rotten cartel of insiders." This from a young man — he is 26 — who is making almost $300,000 a year, according to ProPublica. Kirk said Trump is the "bodyguard of Western civilization." Kirk, like Dolan, mentioned religious liberty.

Next up was Rebecca Friedrichs, a school choice advocate who advocates freeloading: She sought to rob unions of their ability to collect fees for negotiating and enforcing contracts from those teachers who benefit from the negotiations, and took her case all the way to the Supreme Court. Friedrichs' speech was an anti-union diatribe. "We'll keep fighting for the country and children we love, just like President Trump," she told the empty room at the Andrew Mellon Auditorium in downtown D.C. "He's breaking the unions' grip on our schools," she said. "That's why unions have tried to destroy him since the day he was elected." Friedrichs also mentioned religious liberty.

Coming next was Florida Congressman Matt Gaetz, and his speech was so over-the-top, even Fox News turned away to speak with their panel of experts. Just before they did, Gaetz had referred to the "basement-dwelling Joe Biden." Nice. The rest of his speech was similar — Marxists, radicals, looting, mobs.

Gaetz was followed by Republican National Committee Chair Ronna McDaniel — she no longer uses her maiden name, Romney — who warned that a Biden administration would begin "free health care for illegal immigrants."

Throughout the night, the populist theme was sounded again and again: Elites. And remember Joe Biden has been in D.C. for 47 years, so he epitomizes the elite culture and does not give a damn about the average man or woman.

The other two themes of the night were in conflict.

On the one hand, the party pushed back against the idea that Trump is a racist. The highlight of the night was the closing speech by South Carolina Sen. Tim Scott who gave a moving, and upbeat, speech that praised the policies Trump has enacted and how they had helped the Black community.

Former U.N. ambassador Nikki Haley, the child of Indian immigrants, spoke about her mother starting a business and her dad teaching economics at a historically Black college. Georgia State Rep. Vernon Jones, a Black Democrat, explained his reasons for supporting Trump, from school choice to the inclusion of opportunity zones in his tax bill.

But these speeches were interspersed with German-shepherd whistles. Donald Trump Jr. spent so much time chastising China, he did everything but shout "yellow peril." The threat posed by "violent mobs" was a frequent talking point. Haley did not say she ordered the removal of the Confederate flag from the Capitol in South Carolina, only that a "divisive symbol" had been removed.

Most offensive — and self-explanatory — was the appearance of Mark and Patricia McCloskey, the white couple in St. Louis who greeted peaceful protesters with guns drawn on the lawn of their suburban manse. I did not know that both of them were personal injury lawyers, and their talk had the feel of one of those ads: "If you have mesothelioma, you may be entitled to financial remuneration. …"

"Your family will not be safe in Joe Biden's America," she said ominously.

The mixed messaging on race will not work, and if it does, we all need to look for another country. Trump's obsession with Latino immigrants crossing the nation's southern border has been a staple of his political pitch since he first announced his candidacy for the presidency in 2015.

At virtually every 2016 campaign rally, he would engage in a chant response with the crowd, in which the crowds would chant "Build that wall!" He praised former Sheriff Joe Arpaio, whose harsh anti-immigrant policies had worked for years in getting himself reelected in Phoenix, Arizona. Arpaio was convicted of criminal contempt in 2017 and pardoned by Trump a few months later. Earlier this month, Arpaio narrowly lost the GOP primary to reclaim his old job. Trump may be overreaching, however.

Sen. Kyrsten Sinema, a Democrat, narrowly won the state's Senate race in 2018, with 50% of the vote to Martha McSally's 47.6%. McSally would be appointed to the Senate to fill the vacancy caused by the death of Sen. John McCain and she is badly trailing challenger Mark Kelly in most polls this year. The census estimates that 31.7% of the state's population is Latino.

Could Arizona be following the path previously trod by California, Colorado and Nevada, from toss-up state to deep blue? Most polls have Biden winning the state narrowly.

Perhaps because he was never able to build the wall, still less make Mexico pay for it, Trump began rolling out a new race-baiting issue this summer: Housing. He has warned that Democrats plan to introduce low-income housing into suburban areas and Democrats should make no mistake about how raw and bipartisan is the nerve Trump is touching.

In case the racial aspect of this was not clear, Trump tweeted that New Jersey Sen. Cory Booker, a Black man, would be in charge. The gun-toting Patricia McCloskey repeated the theme last night also: "[The Democrats] want to abolish the suburbs entirely by ending single-family zoning," she said ominously. Will the threat work?

WBUR looked no further than the Boston suburbs in true blue Massachusetts to find local zoning regulations designed to preserve the prioritization of single-family homes in their towns. "Suburban decisionmakers, overwhelmingly owners of single-family houses, allow new apartments on a project-by-project basis, often on the edge of town, isolated between train tracks, highways and water," their report noted. "The region largely outlaws what so many non-homeowners want — apartments within walking distance of village hubs."

But we should all fear that Trump has found precisely the kind of issue – low-income housing – that might so polarize the country, he can close the polling gap with Biden. It is ugly and immoral, but that is not to say it won't work.