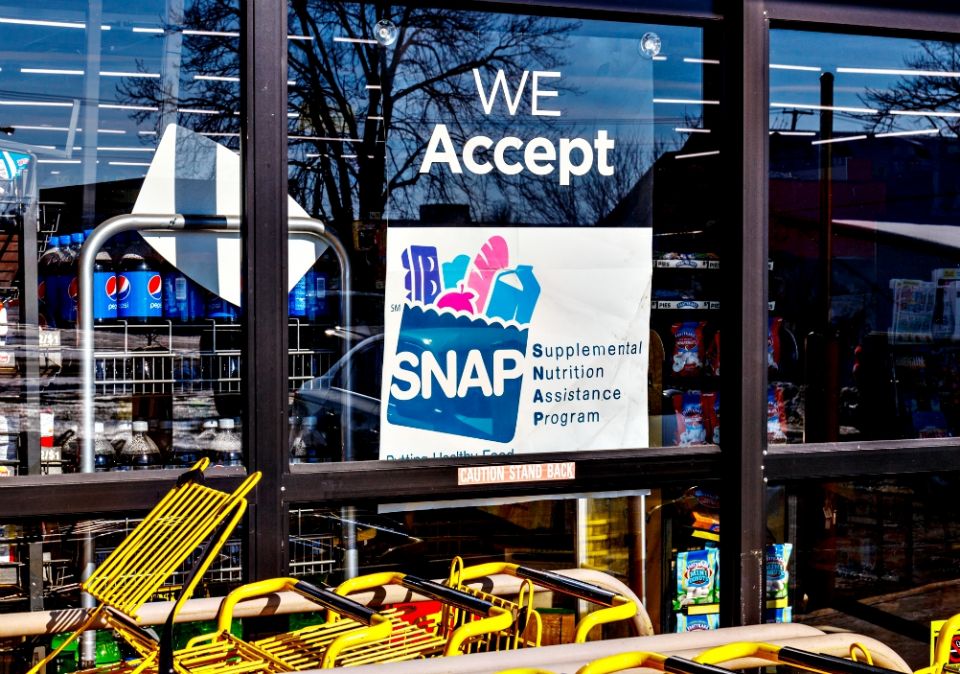 A sign announces that a retailer accepts the Supplemental Nutrition Assistance Program, or SNAP (formerly known as food stamps), in Muncie, Indiana, in January. (Dreamstime/Jonathan Weiss)

President Donald Trump submitted his proposed budget to Congress this week and he calls for major changes in the way the government deals with housing, poverty and health care issues.

The good news is that for many years, a president's budget proposal has been deemed dead on arrival by leaders in Congress. Of course, for the most of the past two decades, the party that controls the White House has not controlled both houses of Congress, as the Republicans do now.

The bad news is that Trump owns the Republican Party. As David Von Drehle explained in The Washington Post, Trump executed a "reverse merger" in 2017. Members of Congress live in fear of him endorsing a primary challenger and so they are reluctant to buck his lead. All last year, we heard whispers that Speaker of the House Paul Ryan and other principled Republicans would distance themselves from Trump as soon as they got their tax reform passed. Tax reform passed. We are still waiting to see them distance themselves.

It isn't surprising that the president wants large cuts in federal expenditures in programs that help the poor and working poor. What has been more interesting is the way the White House suggests effecting those cuts. For example, the White House proposes cutting back on food stamps and replacing the cash that system provides poor folk with a "Blue Apron"-style program in which the poor would get a food basket.

"It lowers the cost to us because we can buy prices at wholesale, whereas they have to buy it at retail," explained budget director Mick Mulvaney. "It also makes sure they're getting nutritious food. So we're pretty excited about that."

Of course, the most nutritious foods are perishable, and it is hard to see how the federal government could deliver all those food boxes with anything but nonperishables. But let's not get picky about facts. The point of this proposal is not factual, it is moral: If there had been a thought cloud above Mulvaney's head, it would have said, "Because poor folk tend to eat junk food that isn't healthy, right?"

Seeing as we are now in a new Gilded Age, what more appropriate message than this: Charity must inculcate virtue, or it is counterproductive.

That got me to thinking. If we want to both save money, and inspire the poor to improve their lot, we could simply deport them. After all, programs like food stamps are expensive, and it is cheaper to live in poor countries like Mexico anyway. Besides, we are reforming our immigration system so it only brings in people who will benefit our economy. "Malthus does Migration" could be the motto of this White House and of congressional Republicans.

So these newly deported poor, who would no doubt miss the good deal they had in the States, would have an incentive to improve their lot, get an education, become a high-tech wiz, so that they could return to the U.S.

Or if the mass deportation of hundreds of thousands of Salvadorans and Haitians (being kicked off temporary protected status) is clogging the deportation channels, or transportation costs are too high, we could go back to the good old days and build poorhouses. After all, Trump promised to make America great again. If we were great back in the days of poorhouses, let's bring them back. And, in the interests of proper diet, we could more easily exercise portion control and avoid obesity.

Alexandra Petri had some other fine ideas, such as making the poor wear sackcloth and ashes to prove there are genuinely humble.

Petri's article got me to thinking. Virtue is not only for the poor. It's for everybody. And, what's more, the poor are not the only ones who are the beneficiaries of government largesse. The tax reform bill the Republicans are so proud of showered billions of dollars on the fabulously wealthy. I suppose we can assume that they are worthy of their wealth, seeing as material worth and moral worth so obviously go hand-in-hand. But how to make sure?

Currently, the only thing the uber-rich had to do to earn their billions in tax cuts was to line the pockets of politicians with campaign cash. Some of the wealthier among the uber-rich, who also, albeit mistakenly, fancy themselves intellectuals, went further and set up agitprop factories that they call think tanks, and they get all sorts of policy papers justifying the Gilded Age policies they wish to enact.

Maybe, to help the rich maintain their moral superiority, we could encourage them to do things that would inculcate virtue. Take humility. That is a virtue. Maybe the rich could be forced to fly coach one time. Or they could have to clean the bathroom in their hotel room when they leave. Or they could work a shift in the prep kitchen of a restaurant where they like to dine.

Hell, this could even be fun. Marie Antoinette had her hameau, why not let today's kings and queens of capitalism get a chance to experience rustic life?

As a Catholic, I do not believe there is a correlation between moral and material superiority. But that connection has taken a hit in recent months: Many men with power and money thought they were entitled to treat their subordinates as sex objects, and now that we finally see justice being done, I think the connection, so deep in American culture, is being questioned at one level.

Let that questioning spread. Let it roll on like the mighty Mississippi — broad and inexorable — until we see all wealth as subject to the demands of justice, and not only for those whose libido got them into trouble. Let us ask why no bankers went to jail after Wall Street tanked the economy in its greed, and let us enact laws that will make sure that, next time, they do go to jail. Let us tax those who do not pay a living wage at a higher rate than those businesspeople who do. Let's make sure income earned by investment pays the same taxes as income earned by the sweat of one's brow.

Excuse me. I got carried away. Any vision of a more just America, any vision of an America that conforms to the biblical vision of justice in which the poor and the widow and the stranger are treated with dignity, that vision begins when Trump and Ryan and all their ilk are retired from public life and when men and women willing to challenge the moral inequities and iniquities of neoliberalism have majorities in Congress and the Oval Office.

I may not live to see that day, but when I am made to watch Mulvaney explain how his food baskets will replace food stamps, it costs nothing to dream.

Every person has a human right to food