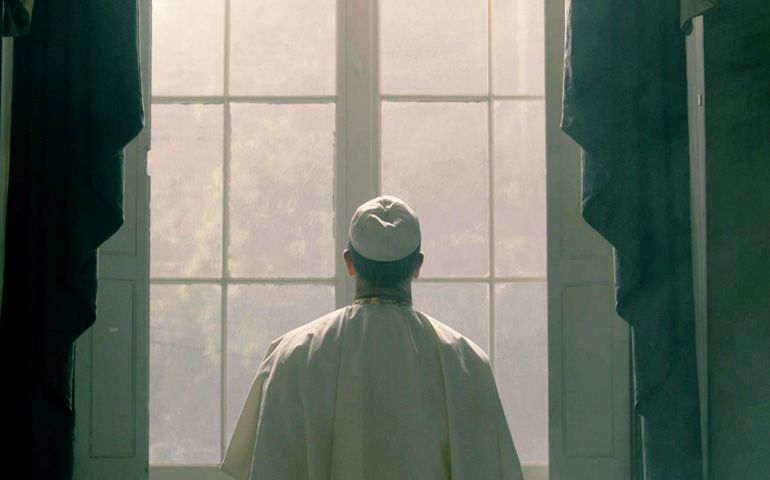 A scene from CNN's docuseries "Pope: The Most Powerful Man in History." Narrated by popular Catholic actor Liam Neeson, the series debuted Sunday, March 11, 10-11 p.m. EDT, and will air in that slot throughout its six-week run, concluding Sunday, April 15. (CNS/CNN)

The fourth episode in CNN's series "Pope: The Most Powerful Man in History" aired last night and it provoked more ambivalence than the previous three. Overall, its treatment of history was spotty and uneven, strong in avoiding caricature but confusing in offering explanations, and in its rush to apply the lessons from that history to the situation of the Catholic Church today, the show became banal and even a little ridiculous.

The main focus of the episode was the Reformation. I wondered how they would deal with this fraught history, in which one side's hero is the other side's bad guy, or has been for 500 years. An indication that the producers were sensitive to this came at the very top of the show when the narrator notes that it was the excesses of materialism and corruption in Renaissance Rome that caused the initial problem, not anything in the essence of the institution.

This sensitivity to complexity received a second, important affirmation when historian Diarmaid MacCulloch noted that at the start of the sixteenth century, "There is a ferment of devotion, deep, deep piety in Europe. Everyone went to church out of conviction." This last may be a tad excessive: We do not know that everyone went out of conviction, do we? But, his point that the Reformation grew out of a ferment that was already there, as much as it was a reaction to the absence of genuine religiosity at the papal court, is a point is too often overlooked.

Sometimes, I wasn't sure if the producers were making an inside joke or not. After mentioning the hedonistic lifestyles of the Renaissance popes that had been the subject of last week's episode, the narrator says that Pope Leo X, elected in 1513, "takes overindulgence to new heights." Was that a play on words? Indulgence? Later, at the end of the episode, they show Pope Francis greeting a crowd in a stadium, and they never mention that it is in Stockholm, a bastion of Protestantism. Why not mention it?

The treatment of indulgences is a little spotty. At first, historian Eamon Duffy says they represent "the forgiveness of sins, in return for cash payments," which he knows is not the case. An indulgence pertains to the diminishment of temporal punishment for sin, not to forgiveness of sin. MacCulloch notes that indulgences had their origins in the Crusades, and that they were "a way of rewarding people for doing something good for God." Duffy comes back and clarifies his earlier statement. But, no one stops and asks how people at the time thought of them: Did they confuse remission of sins with diminishment of punishment? Did they think God's mercy was for sale? And, while Luther challenged the abuse of indulgences at first, he went on to challenge them in themselves.

The treatment of the great Reformer is sympathetic and a little confusing. For example, Susan Wise Bauer, one of the show's expert commentators, states, "This was not the first time these ideas [of Luther's] had been put out. Far from it. But the difference between 1517 and the 14th century is the printing press. The 95 Theses were printed and they were widely distributed." But, up until this point, the narrative had been that Luther was responding to the excesses of the Renaissance popes of the 15th century. Which is it? It is also odd that there is no comparison made between the Reformation and the Great Schism, indeed there is almost no attention paid in this series to the Orthodox Churches, even by way of comparison.

The confusion continues during the discussion of the reign of Pope Clement XII. The producers get the general outlines correct: Clement was sympathetic with some of Luther's ideas and recognized the need to reform, but he was himself a dreadful and indecisive leader. But, I wasn't sure why they kept referring to Charles V as the "King of Germany" and showing him as a grey-haired old man. At the time his troops sacked Rome, Charles V was 27 years old. And, there was no political Germany of which to be king. As ruler of the Holy Roman Empire, he was the suzerain of the various German principalities, but Bavaria and Brandenburg and the other states that constituted the empire had their own kings and dukes, and Charles did not control them as he did control his ancestral titles in Austria, Spain and the Netherlands.

On the other hand, the portrait rendered of England's King Henry VIII is appropriately unflattering.

When the show turns to the Catholic Reformation, a phrase they never use, there is a bit too much emphasis on Ignatius of Loyola as if the Catholic Reformation was a one man show and he was that one man. But, Bauer again makes an important point, one that I suspect will be news to many CNN viewers. "Ignatius was a man who believed that a direct communication with God was not only possible but was absolutely essential for the soul to prosper," she states. "Too often, I think, we tend to breakdown the Catholic and the Protestant, especially during the Reformation, into 'Catholics thought people needed a mediator between God and man," and Protestants say 'No, you can speak directly to God.' Ignatius was a Catholic who said that the direct experience of God was one of the most important experiences that the church could steer you towards."

Just when you are glad to see some sophistication, the show introduces Pope Paul III and the Council of Trent and states: "A Counter-Reformation was born." But, as noted above, they had already indicated that there was a spiritual ferment long before the council fathers gathered in Trent. It takes them a few minutes to commend Paul as the great reformer he was, and they credit him, correctly, with appointing key reformers to the cardinalate, although I wish they had added that these reformers were themselves of a variety of opinions, with Reginald Pole and Gasparo Contarini taking a different approach from that advocated by Gian Pietro Carafa, who would become Pope Paul IV. But, that is to quibble perhaps.

It is no small quibble to point out that the producers lose the credibility they have established when they leap from the Council of the Trent to Pope Francis in one step, saying that these reforming cardinals of the mid-16th century were "setting the stage for the first Jesuit pope" as the camera jumps to the scene of Pope Francis' first appearance on the loggia of St. Peter's five years ago. That is quite a jump.

That jump begins the silliness. MacCulloch asks, "Why now, for the very first time, a Jesuit pope?" And, the narrator states, "The unprecedented election of a Jesuit pope signifies a real shift in the 2,000-year-old office." Does it? Need it? What if it had been a conservative Jesuit who had been elected? Anthea Butler from the University of Pennsylvania affirms, "Pope Francis positions himself not just as the leader of the Catholic Church, the papacy, but as a moral leader." Could that not be said of every pope in our lifetime? MacCulloch comes back on to explain, "It almost suggests the society felt that – 'Jesuits to the rescue!' The church was in trouble so they'll send one of their own in." What is he talking about? The Jesuits did not elect Cardinal Bergoglio pope, the other cardinals did.

This is all foolishness and there is more as the "experts" make false comparisons between Francis and his predecessors. For example, Pope Benedict XVI was known as "the Green Pope" for his initiatives in ecological protection, but from this CNN episode you would think Francis was the first and only pope to address the issue.

This was the weakest of the four episodes I have watched — and the last I will review: The company only sent out four episodes for review purposes. But, overall the series is better than I had expected and much better than I had feared. The experts are, to put it charitably, uneven, with Bauer and Duffy the most consistently intelligent and on point. The images mostly cohere with the narrative: Yes, we see a pope dressed in white about 200 years before popes started wearing white, and a young emperor played by an older man, and a picture of Nicaea with the bishops dressed in clothes that would not be worn for another 1,200 years, but mostly the images are fine. (This is TV and images matter!)

The value of this series, however, is that it treats religion with the seriousness it deserves, and it mostly avoids any caricature of the principal actors in the tale. I suspect if I had a youngster in the house they might be spurred to go to the library and learn more about the papacy. The script throws around the word "power" with recklessness and imprecision, but the story shows how it is worldly power that always puts the papacy, and the Catholic faith with it, on the wrong track. I give this fourth episode a D but the series as a whole a B. There are plenty of worse ways to spend an hour watching television.