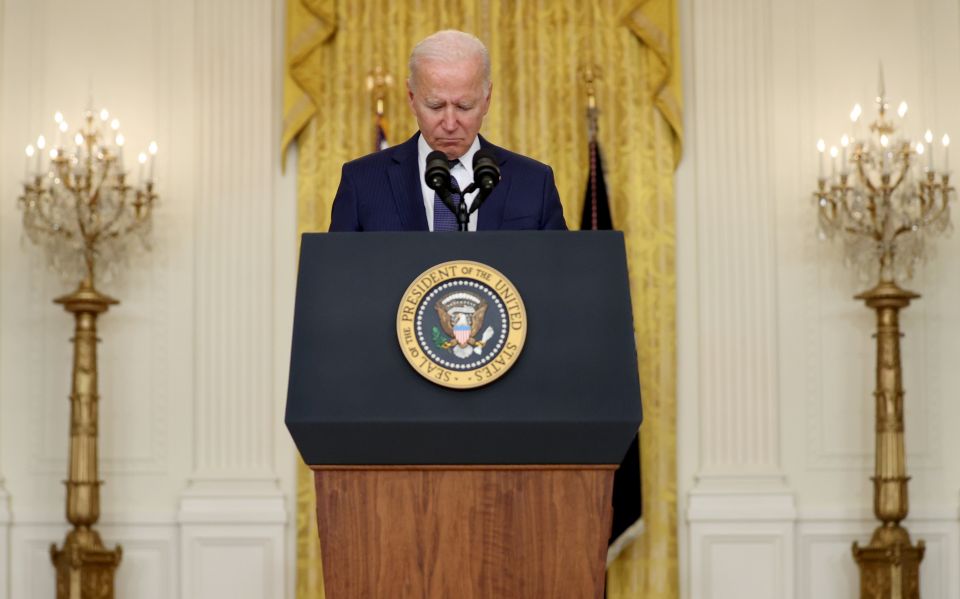 President Joe Biden reacts Aug. 26 during a moment of silence for those who died in twin explosions at the airport in Kabul, Afghanistan, as he delivers remarks about the ongoing chaos in that country at the White House in Washington. (CNS/Reuters/Jonathan Ernst)

President Joe Biden saw his approval numbers tumble in recent weeks. The RealClearPolitics average of polls has him underwater for the first time since he took office, with 49.1% disapproving his job performance compared to only 46.9% who approve. The resurgence of the coronavirus combined with the chaotic, and tragic, withdrawal from Afghanistan are largely to blame. The killing of 13 soldiers and many civilians at the Kabul airport last week dramatized the tragedy that is unfolding as America extricates itself from its longest war.

All politicians in a democracy make their decisions with one eye on public opinion; most keep the other eye on what they think is right. In an age of hyper-partisanship and highly accurate gerrymandering, the two are not always that far apart. Conservative politicians represent conservative districts and so their conservative voting records are both popular and what they think is right. Senators represent states, not districts, and there is no way to gerrymander a state, but most states are significantly red or blue, and only a few are genuinely up for grabs come election time.

Only the president and the vice president are elected by the entire nation so they look at public opinion differently, full stop. What is more, only the chief executive makes the kinds of life-or-death decisions we see playing out in Kabul. I do not think we will ever know exactly what motivated Donald Trump, but most presidents make most national security decisions based first and foremost on what they believe is in the national interest. In this instance, there is no reason to doubt Biden when he says he thinks the country has had enough of endless war; he was the most prominent dove in President Barack Obama's inner circle.

Polls may be registering disapproval about the chaotic withdrawal, but even in the midst of that chaos, the American people still register strong support for the withdrawal itself. Sixty-three percent of voters in a CBS News/YouGov poll supported the withdrawal and 61% in an NBC News poll said the war was not worth it. A year from now, the chaos will be a distant memory, but the fact that we are no longer at war in Afghanistan will have become something most candidates are supporting.

I take back nothing of my previously stated reservations about polling and its accuracy but in these cases, the numbers are so stark, they can be trusted not for their exactitude but for their general significance.

At The Atlantic, Russell Berman argues that Biden's numbers were going down before the chaos erupted in Afghanistan and that the real reason for his declining approval rating is the return of concerns about COVID-19. All politics is local, and people will forget about the situation in Afghanistan sooner rather than later. About this, Berman is right.

The long-term effects on the political landscape brought on by the COVID-19 resurgence is murkier. It is true that Biden took office just as people were beginning to get vaccinated and as the days were getting longer, both of which contributed to a decline in the number of COVID-19 cases.

Then, at the start of the summer, the number of people getting vaccinated hit a plateau, and the delta variant took off among the unvaccinated. Hospitals began to fill again. The national mood turned. Any president was likely to see his approval rating go down in such a circumstance.

Politics, however, is even more local than Berman figured. In Florida a new Quinnipiac poll indicates that 60% of voters think students and teachers should wear masks in schools, and 54% think schools should be permitted to require masks. Sixty-nine percent oppose Republican Gov. Ron DeSantis' threat to withhold state funding for school leaders who enact mask mandates against his wishes, while 59% support requiring everyone to wear masks in indoor public spaces.

Perhaps most tellingly, 63% of Floridians said that the issue of wearing masks is primarily about public health, while only 33% say it is an issue of personal freedom. Those numbers warm my anti-libertarian heart.

DeSantis has so thoroughly doubled down on opposing mask mandates, it is hard to see how he could extricate himself from that position. Biden should lash himself to the local school leaders in their fight with the governor.

In Texas, the picture is murkier. The best polling is done by the Texas Politics Project at the University of Texas. In June, their polling showed that only 46% of Texas voters thought the coronavirus constituted a "significant crisis," although that was before the delta variant had taken hold and the ICU wards had filled up.

"Republican voters in Texas and their elected representatives have consistently prioritized helping the economy and sending children to school over efforts to contain the virus. The emergence of the delta variant is likely to moderate some of these views, but if anything, the concern that voters, and especially Republican voters, hold towards the virus is unlikely to return to levels seen in earlier waves of the pandemic," Joshua Blank, research director at the Texas Institute told me.

"Consequently, it's unlikely that the delta variant will shift opinion among Republican voters enough to produce a change of course from the state's leadership, and if anything, the rigidity of opinion in the face of overwhelming case counts is likely to reinforce the efforts by elected officials to try to limit local efforts to contain the virus."

No president can escape being held responsible for voters for bad things that happen on his watch, and all revel in the praise they receive when good things happen, whether or not these good and bad things were the president's doing. A lot of factors go into the health of the economy, or the trajectory of a virus, over which a president has little or no control, but the praise or blame attaches itself to the occupant of the Oval Office nonetheless.

In this case, however, Republican governors in Florida and Texas seem eager to champion policies about the virus that excite their base and almost no one else. Biden needs to reinforce that identification by supporting local officials who want to take virus mitigation steps but are prevented from doing so by their state's governors.

We are living through very consequential times. The evacuations out of Kabul are ongoing and the danger to our nation's troops, and to Afghan civilians, remains acute. The virus is busy trying to figure out what mutation will allow it to outrun our efforts to kill it. Racial tension and income inequality and immigration reform are issues difficult to resolve and morally fraught but they must be faced. Surveying public opinion might seem trite amidst such weighty moral challenges, and no one can argue it replaces the need for moral analysis.

But if the past five years of Trumpism have taught us anything it is that democracy is more delicate than we thought, so we ignore the role of public opinion at our peril. Given the current state of the Republican Party, and its unwillingness to stand up to Trump, the Democrats are democracy's best shot at survival and so we have a moral interest in Biden's success. That interest is not negligible.

Column | If all politics is local, Biden's approval ratings should bounce back