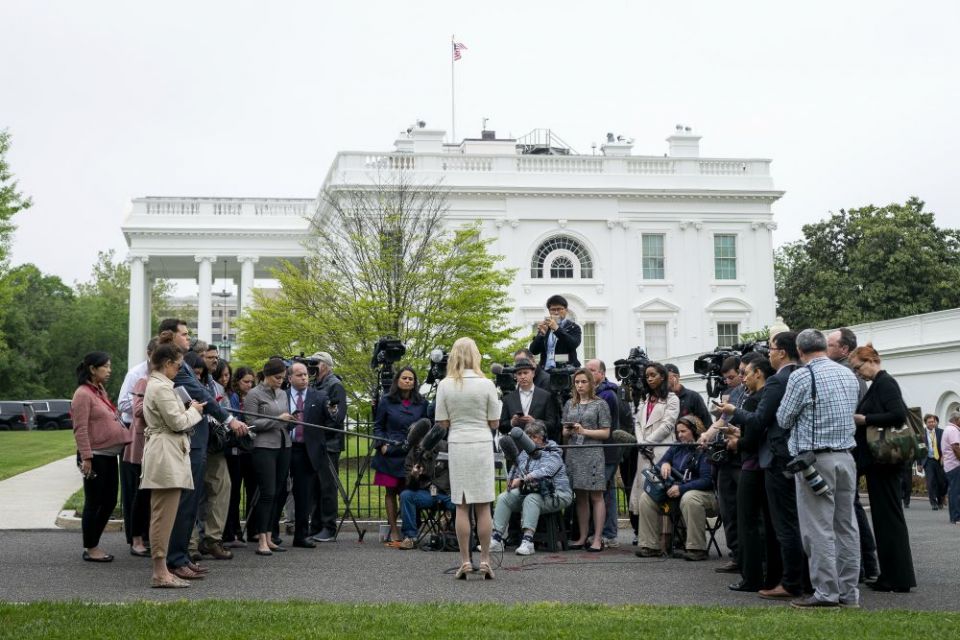 Counselor to the president Kellyanne Conway talks to reporters and answers questions May 1, outside the West Wing entrance of the White House. (Flickr/White House/Tia Dufour)

"What is truth?" Pontius Pilate asks Jesus. This question, recorded only in the Gospel of John, would be one of the most difficult lines to deliver if you were an actor and you had been cast in the role of Pilate. Do you deliver it in a cynical fashion? Or sincere? Bewildered? Wistful? Contemptuous?

If you were to ask the American people if they thought their political leaders were truthful, you can bet that most of them would adopt some combination of the first and last adjectives listed above: They would be cynical and contemptuous, and not without reason. "Ah, those politicians are all liars," is, perhaps, the most frequent reply you get when you ask the proverbial man or woman on the street about politics.

A politician's job is to protect, defend and promote the state, not necessarily to tell the truth. "In war, truth is such a precious commodity, she must always be accompanied by a bodyguard of lies," Churchill famously said when explaining his commitment to, and investment in, counter-intelligence measures. How many British, Canadian and American lives were saved on June 6, 1944, because of the elaborate deceptions aimed at convincing the Wehrmacht that the D-Day invasions would land in the Pas de Calais and not in Normandy?

In American politics today, the issue of truth could not loom any larger. Modern politics has been afflicted with both the tools and the mindset of mass marketing and PR, which is mostly a form of highly organized deceit: "Buy this product and you will be happy or make your spouse happy! Get rich quick by investing in these stocks!" Except that the pitches are quite sophisticated and, with the power of the internet and the omnipresence of cookies, sellers know that you were looking online at pictures of armchairs, and for weeks you are bombarded by advertisements for armchairs. In the case of one candidate for the presidency, much of this sophisticated marketing strategy is conceived in Russian.

President Barack Obama lied in this marketing way when, in an effort to persuade people to support the Affordable Care Act, he famously said, "If you like your doctor, you can keep your doctor." The claim was not true, and it became such an iconic lie because he set up the claim by saying he was correcting misinformation. Before the Affordable Care Act, you might or might not be able to keep your doctor if your company-sponsored health care changed. The ACA did not change that fact. So, when people stepped forward and said they could no longer keep their doctor, Obama could rightly claim, "The ACA is not responsible for that." But, his claim was absolute before passage of the bill because only an absolute assertion would effectively quell nerves. It was still a lie, perfectly representative of the PR-ification of politics. In the long run, it contributed to the generalized belief among the American people that all politicians are liars. Just so, it laid the groundwork for the arrival of you know who.

We have "a president who lies constantly" as former FBI Director James Comey said repeatedly during a CNN town hall last Thursday. He recounted what it felt like to be sitting with the president as he makes untrue statement after untrue statement, many of them of no consequence except to him, such as the claim that the crowds at his inauguration were the largest ever.

Comey went on to explain, as he had in an earlier op-ed in The New York Times, how the president's constant lies co-opt those who work for him. It was a very astute commentary about how our poor human nature, in a court-like atmosphere, can be corrupted. "Accomplished people lacking inner strength can't resist the compromises necessary to survive Mr. Trump and that adds up to something they will never recover from," Comey states. This is one of the first times I have seen a major public figure so adroitly recognize that moral stature and public accomplishment have no necessary relation one to another. It is a secret most successful politicians, businesspeople, prelates do not want you to know: Their high social status may or may not reflect moral or intellectual merit.

The second observation is equally important and just as rare in its candor: "You feel this happening. It bothers you, at least to some extent. But his outrageous conduct convinces you that you simply must stay, to preserve and protect the people and institutions and values you hold dear. Along with Republican members of Congress, you tell yourself you are too important for this nation to lose, especially now." It should not surprise that insecure people in prominent positions tend to spend a great deal of time convincing themselves of how vital they are to the good of the whole.

Comey said that character is a top-tier issue above all others, that however much we care about abortion or the environment or economic issues, if the president is a habitual liar, we have to confront that fact first, before we think of these other issues because democracy cannot long survive having a president who lies constantly.

I hope the bishops and the staff at the bishops' conference who will be preparing election-related material will ponder that: Character is a threshold or top-tier issue, without which, you cannot reliably pin your hopes on any policy promise, however important. In the post-Trump era, it will fall to social and cultural and religious leaders to help restore confidence in our democracy. They should start now and they should start with Comey's morally incisive commentary.

Column | The issue of truth looms large in American politics