At the Center for Migration Studies, Kevin Appleby explains the Trump administration's proposed changes to the "public charge" rules that govern what kind of public assistance legal immigrants can access. Donald Trump wants to keep them from receiving Medicaid, food stamps and housing support to which they are currently entitled. I thought Trump and his team "loved" legal immigration. Evidently, not so much. Appleby calls on the religious community to oppose the administration, but the religious folk Trump cares about, the evangelicals, are not going to cause a stir about this.

So, Sen. Elizabeth Warren has laid to rest the doubts about her Native American heritage. Politico has the story. I wish that she had just gone online to Ancestry.com, and that the editors of this video could have left the law professors on the cutting room floor. Still, this side of Warren, hanging with her older brothers, recalling the ups and downs of her life, this is the human side we need to see more of. Yes, she is a prodigy, but she needs to appear like a human being first.

In The New York Times, Bret Stephens argues the Democrats are blowing it again. I am not sure I agree with everything here, but he is spot-on that Sen. Chuck Schumer's decision to make the Brett Kavanaugh confirmation vote the key political battle of the year had the effect of harming red state Democrats. Still, the Dems' problems are deeper than that. It is why Schumer made that choice, and the reason is the party is not merely a vehicle for culture-warrior left, which is, as Stephens recalls Mike Kelly saying, still seeking "to marginalize itself and then enjoy its own company. And to make itself as unattractive to as many as possible." 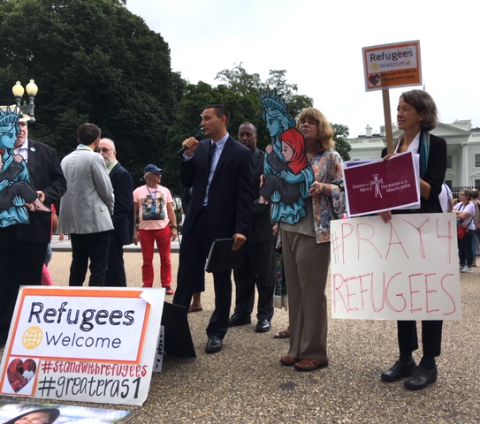 Catholics join other religious organizations and groups near the White House in Washington Sept. 12 urging the administration to allow 75,000 refugees into the country next fiscal year. (CNS/Rhina Guidos)

In The Washington Post, on the other hand, E.J. Dionne looks at the Trump administration's decision to severely restrict the number of refugees we will accept into the country this year. He asks the correct moral question: Does anyone think this makes America great again?

At First Things, they evidence greater sympathy for Steve Bannon and his Hobbesian vision of social relations than they do for Pope Francis and his explicitly Catholic vision of social relations. It is funny (or scary) to see Bannon think his populist approach can transcend the divisions of left and right: Ideas do not really matter to him. I thought Catholic conservatives were supposed to be fans of Aquinas, not advocates for a polity built on resentment and bigotry.

The legalistic fetish of the American imagination is trying to impose itself at the Synod of Bishops. In an essay published at the Catholic Herald, J.D. Flynn complains that the rules for voting at the synod have not yet been announced and begins the process — you saw this coming! — of questioning the synod's legitimacy. He writes, "In the absence of clear norms, some observers have begun to ask whether the 2018 synod will prove to be an authentic consultation of the world's bishops, or an exercise only in the appearance of 'synodality.' "This is rich. Nowhere does Flynn mention that the synod became an entirely rote affair during the long pontificate of St. Pope John Paul II. I do not recall conservatives complaining about those synods exhibiting only "the appearance of 'synodality.'"

At the National Review, Michael Brendan Dougherty reveals his at once simplistic and vile interpretation of the papacy of Francis. Safe to say that Dougherty has never asked, "Who am I to judge?" Everything, however, is a kind of caricature of reality, like looking at oneself and one's friends in a funhouse mirror.