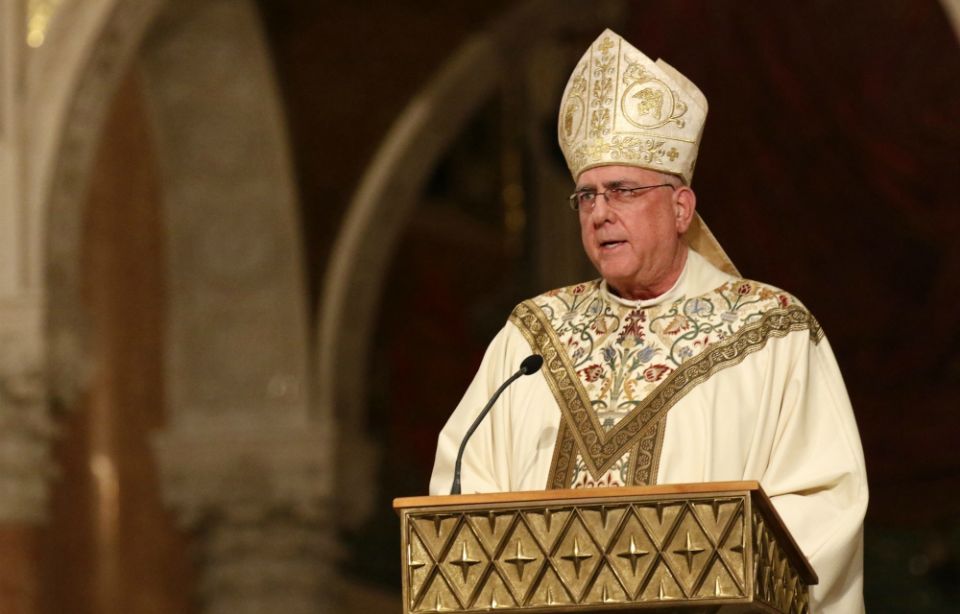 Archbishop Joseph Naumann of Kansas City, Kansas, delivers his homily during the opening Mass of the National Prayer Vigil for Life Jan. 17 at the Basilica of the National Shrine of the Immaculate Conception in Washington. (CNS/Gregory A. Shemitz)

Calling all Democratic candidates: This article in Politico looks at polling data that shows if you tell Republicans that Donald Trump is not a "self-made man" but, in fact, was born rich, with a father who gave him his start and more than $400 million along the way, their opinion of his business acumen and assessment of his empathy drops 10 points. Among Republicans.

Seventy percent of House Republicans joined their Democratic colleagues in seeking to maintain sanctions against certain Russian oligarchs close to Russian President Vladimir Putin. President Donald Trump is trying to lift the sanctions. But, in the Senate, not enough Republicans broke ranks to keep the sanctions in place. I note that Sen. Mitt Romney, who began his Senate career calling out the president's character, in this instance provided us with a profile in cowardice and voted with the president. The New York Times has the story.

Sometimes, a conclusion can be correct and important, even though the premise is wrong. In this op-ed in The Washington Post, Aliza Plener Cover wonders if Pope Francis' decision to say capital punishment is never permissible will, perversely, result in more executions as Catholics get screened off juries in capital cases. The premise — that the laity listen to the pope on moral matters and follow his lead — is easily disproven by entering almost any church on Sunday morning: There are not a lot of families with half a dozen kids, because most Catholics ignore the papal ban on birth control. But the conclusion is correct and scary: Because of this prescreening of juries, you end up with people who are more committed to the death penalty than a random selection of the population would be. Is this, then, still a jury of one's peers?

At the Tablet, the always-spicy Melanie McDonagh takes on the Cambridge University "snowflakes" who wish to banish John Finnis from campus because of his views on homosexuality. And her description of accompanying her son to religious education class is brilliant.

I know this risks hell freezing over, but George Weigel was the first guest on Raymond Arroyo's television show last week and when they discussed the sex abuse mess, I found Weigel's comments not too far distant from my own. His praise for Archbishop Carlo Maria Viganò is bonkers, and he can't bring himself to speak honestly about the ugly legacy of his hero St. Pope John Paul II. But his ideas about accountability and the need for canonical legislation in this area were spot-on.

In Spain, people bring their pets to church to be blessed on the feast of St. Anthony. The pictures are adorable but I can't help thinking: Don't they have any big dogs in Spain?

At FiveThirtyEight.com, Nathaniel Rakich compares how Sen. Elizabeth Warren did in certain towns in Massachusetts compared to how Hillary Clinton performed in those same towns. Very interesting to note that Warren underperformed in wealthy, elite suburbs, which probably has to do with the fact that she was not running against Trump, but she overperformed Clinton — and Barack Obama — in those rural towns where Obama had won previously only to have Trump win in 2016.

At The New Yorker, Benjamin Wallace-Wells looks at the Green New Deal and how it differentiates Alexandria Ocasio-Cortez and her allies from the Obama generation's approach to this, or any, topic. He uses the very "supplanted," which overstates the case. And he should point out that, so far, the Green New Deal is a slogan and it is far from clear what policies it will include. That said, hats off to Ocasio-Cortez and her friends for daring to dream big, to help the Democrats break out of the New Democrat paradigm that was needed in the 1990s, but is not convincing anyone today.

At Politico, Ann Coulter and other alt-right racists are furious that Trump offered a deal on the Dreamers, albeit a temporary deal, in exchange for funding for the wall. Why Trump listens to this person, I do not know. But if I were the Democrats, I would consider taking the deal. Yes, there is only a reprieve for the Dreamers, not a pathway to citizenship, but the wall is never going to be built, so if we can improve life for a million young people, to say nothing of reopening the government, I would take the deal.

As Chairman of the U.S. Bishops' Committee on Pro-Life Activities, I commend President Trump for announcing at today's March for Life that he will oppose repealing or weakening any existing pro-life laws or policies. These pro-life laws and policies reflect the convictions of millions of Americans, many of whom attended today's March, that taxpayers should not be forced to fund abortions, or organizations that promote abortion, or participate in any way in the deliberate destruction of unborn human life.

We are deeply grateful for the President's pro-life commitment, and for all the actions this administration has taken to protect unborn children and their mothers from the violence of abortion. We look forward to working with Congress and the Administration to advance policies that value human life and dignity from conception to natural death.

How can the archbishop shower the president with praise like this when Trump is harming our fellow Catholics who had the misfortune to be born south of the border?

Protecting the unborn in a 'throwaway culture'