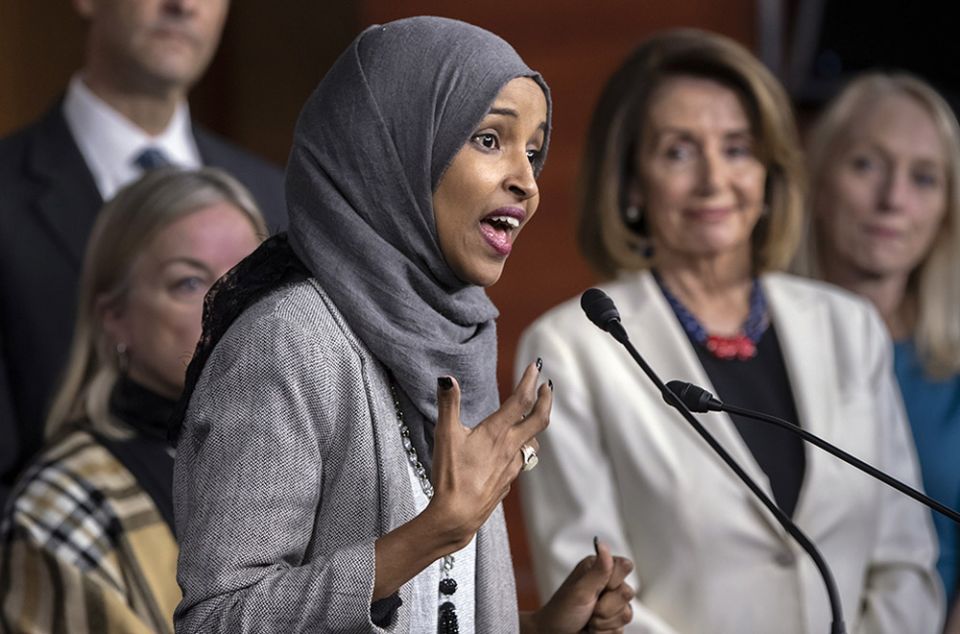 Rep.-elect Ilhan Omar, with House Democratic leader Nancy Pelosi of California, right, speaks about legislative priorities when Democrats assume the majority in the 116th Congress, during a news conference Nov. 30, 2018, at the Capitol in Washington. (RNS/AP/J. Scott Applewhite)

What to say about the news that Blessed John Henry Newman, the greatest English theological writer of the 19th century, has had another miracle attributed to him, virtually assuring his canonization? It makes me want to sing his greatest hymn, "Praise to the Holiest in the Height" sung here to the tune Billing.

At La Croix International, Massimo Faggioli on the sinister influence of money in the U.S. church, a story that NCR has been focusing on for a couple years now. Faggioli brings his vast historical perspective to bear on the topic, and does so brilliantly. The next time you run into the Napa Institute's Tim Busch, you might have to catch yourself from calling him Prince Metternich.

The incomparable Mark Silk, at RNS, on the education of Rep. Ilhan Omar, whose anti-Semitic remarks were quickly condemned and for which the congresswoman issued a robust apology.  Silk notes the irony of Trump chastising Omar, and why Jews continue to support Democrats despite the president spending so much time talking about Israel. The money quote: "If history has taught us anything, it’s that when Christians are on the march, Jews run in the opposite direction."

In the file "liberals who just don’t get it," the Center for American Progress has a column entitled "Reclaiming Religious Freedom," by Emily London and Maggie Siddiqi. They support religious freedom, so long as it is invoked on behalf of causes they support or minorities they like. If it is invoked to pursue policies they do not like, it is misuse. "Religious liberty protections were never intended to justify the discrimination of individuals in health care, child welfare, schools, the workplace, or any aspect of public life," they write, demonstrating an ignorance of history that is breathtaking. I think it is stupid of Christian churches to discriminate against gay people, but whether or not such discrimination is constitutionally protected is a different matter.

At Politico, this headline "Republicans Gush over Klobuchar" may not be helpful to someone trying to win a Democratic primary. And at Fox News, Colin Reed says Sen. Elizabeth Warren is the Democrat Trump most wants to run against. I would note: Be careful what you wish for. Plenty of Democrats thought Donald Trump was the Republican who would be easiest to beat. And, Sen. Amy Klobuchar, like Sen. Warren the day before, left some key words out of her campaign announcement this past weekend. Neither woman mentioned abortion rights or transgender bathrooms or any other culture war issue. I will be profiling Klobuchar after her Town Hall next Monday night on CNN.

At the Working-Class Perspectives blog, Ken Estey of Brooklyn College draws out the meaning of the phrase "dignity of work" that Sen. Sherrod Brown has put at the center of his presidential exploratory tour. And, he calls on the senator — and others — to stretch a bit further because it is the dignity of workers that must be embraced as well.

Need some cheering up? From WJLA-TV, a story about a restaurant near the White House where the owner feeds the homeless every day, no questions asked, no money needed. The restaurateur is not a Christian, yet he is a better Christian than most of the Christians I know.