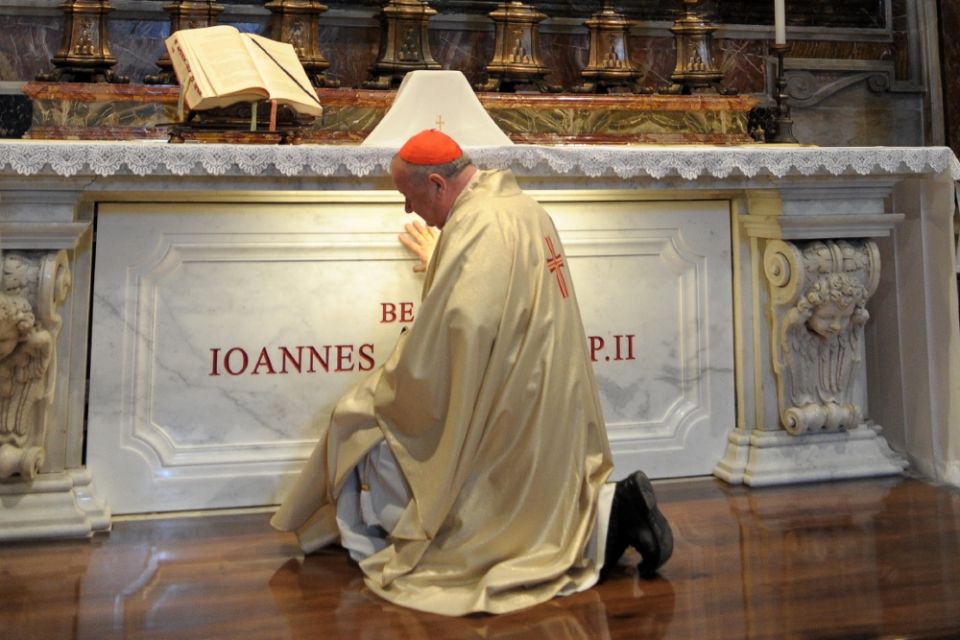 Polish Cardinal Stanislaw Dziwisz prays at the tomb of St. John Paul II in St. Peter's Basilica at the Vatican in May 2011. (CNS/L'Osservatore Romano)

It is hard to know for certain whether President Donald Trump's animus toward the island of Puerto Rico and its people is rooted in ignorance or bigotry or hurt feelings because the mayor of San Juan, Carmen Yulín Cruz, would not kiss his ring. Whatever the source, he combined misinformation with animus in remarks to Senate Republicans this week and seems intent on letting the poor people of Puerto Rico struggle through their recovery from the hurricanes and the economic meltdown. The Washington Post has the story.

Don't reporters have some obligation to get an alternative point of view when it is almost self-evident they are being lied to? That question came to mind when I saw this Catholic News Agency story in the National Catholic Register, in which Cardinal Stanislaw Dziwisz suggests that Pope John Paul II really led the fight against abuse. I believe the late pontiff was a man of integrity, but I also believe he was surrounded by people like Dziwisz, who is still lying through his teeth. For example, Dziwisz's comments about the investigation into Fr. Marcial Maciel are, to my certain knowledge, inaccurate: The pope may have approved the start of the investigation but once it was completed, it simply sat there and no action was taken against that monster of a man.

In The New York Times, Paul Krugman admits to being baffled as to why Republicans are still attacking the Affordable Care Act, aka Obamacare, even when doing so has been demonstrated in last year's midterms to be a political loser and the cost of a repeal would fall disproportionately on some of Trump's key supporters. I suspect that GOP strategists think Obamacare is akin to welfare and they can paint its recipients as modern-day "welfare queens," unworthy, non-white recipients of government largesse and redistribution. That was ugly politics when Ronald Reagan did it in 1980 and it is even uglier today.

John Russo, of the Kalmanovitz Initiative for Labor and the Working Poor at Georgetown University, has a new article at Newgeography.com in which he urges Democrats not to give up on Ohio too quickly. He rightly wonders if Trump voters will stick with him after his promises to revive the state's industrial base have proven to be false. I do not think the Democrats will be able to win Ohio, but I think they should make the Republicans work hard to hold on to it.

At Politico, Blake Hounshell poses one of the biggest questions left over by the delivery of the Mueller report: If Trump did not collude with the Russians to gain office, why does he like them so much? There is a closely related question: What did Mueller pass off to the Southern District of New York? Remember that Mueller's brief was fairly narrow and did not include, say, illegal business dealings with Russia.

At Millennial, a report on a new statement regarding Christian ethics and the "ecological emergency." It is not only a fine statement, but it shows that a smart Democratic candidate can use religious language, as well as scientific, when discussing climate change and that such language resonates with millions of millennial believers.

EarthBeat Weekly: COP26 results are still too little, though perhaps not too late

What Biden got right in his approach to climate change