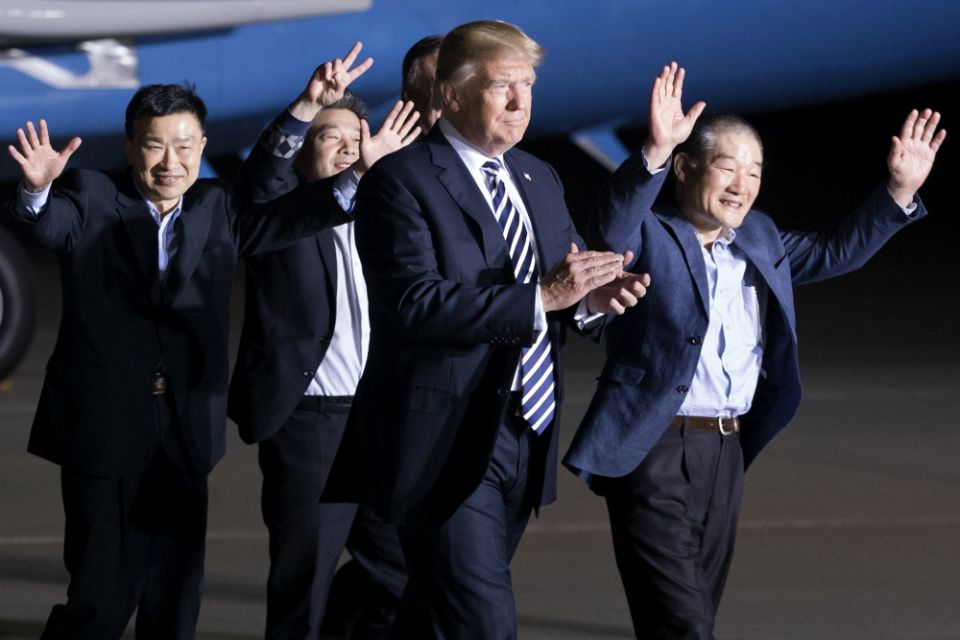 President Donald Trump walks with three U.S. detainees arriving May 10 at Joint Base Andrews, Maryland, after they were released by North Korea as a goodwill gesture. (CNS/EPA/Michael Reynolds)

In The Washington Post, E.J. Dionne on the necessity of dialogue and reaching out to disaffected Trump voters. I think the issue is even deeper than Dionne allows: Yes, there are strategic reasons to reach out to Trump voters and, yes, we should model the behavior the president does not in terms of civil discourse and the like. But I also think liberal elites need to listen to the concerns of disaffected Americans who turned to Donald Trump because they felt, not without justification, that a Hillary Clinton presidency would merely perpetuate the neoliberal policies that have harmed them.

In the Guardian, Thomas Frank looks at the most important labor event of the year, the flood of strikes by teachers in many Southern states where they are chronically underpaid. Frank explains how the strikes betray the facile stupidity of so many neoliberal conceits about how to "fix" education. Teachers are on the front lines in neighborhoods that have seen social capital fleeing, and blaming them when students come to class poorly nourished, with a parent (and it is usually a parent, not parents) working two jobs to pay the rent, is it any wonder teachers have trouble getting around to teaching?

Writers of the world are busy thinking of the appropriate adjectives and adverbs to deploy regarding the upcoming summit between Trump and North Korean leader Kim Jong Un. Politico leads with "surreal," which captures one aspect of the event, its unexpected quality, but surreal is a value-neutral term. Something can be so beautiful we think it surreal. And the bigger question is if Kim will be the stable one at the sit-down? Will the CIA make sure the translator knows when to blow the thing up when only the two principals and their translators are in the room if Trump makes a pledge he shouldn't?

At RealClearPolitics, Peter Berkowitz on the decision by Duke University to terminate a wildly popular and rigorous professor, Evan Charney. Officially, the university is not discussing its decision, but Berkowitz is surely near the mark when he writes:

But given the flood of impassioned student support for Charney, the proliferation of campus "safe spaces" (the Sanford School [of Public Policy at Duke] boasts one), and the rise of "bias response teams" at colleges and universities around the country, a different explanation seems more likely. It's quite possible that a handful of students who took Charney's section of his department's required class on ethics and public policy were offended by his penchant to put all perspectives to the test. After all, many of the young men and women who now reach our elite universities have been inculcated since primary school with the belief that their moral judgments are beyond reproach and that the purpose of the classroom is to reinforce their political convictions.