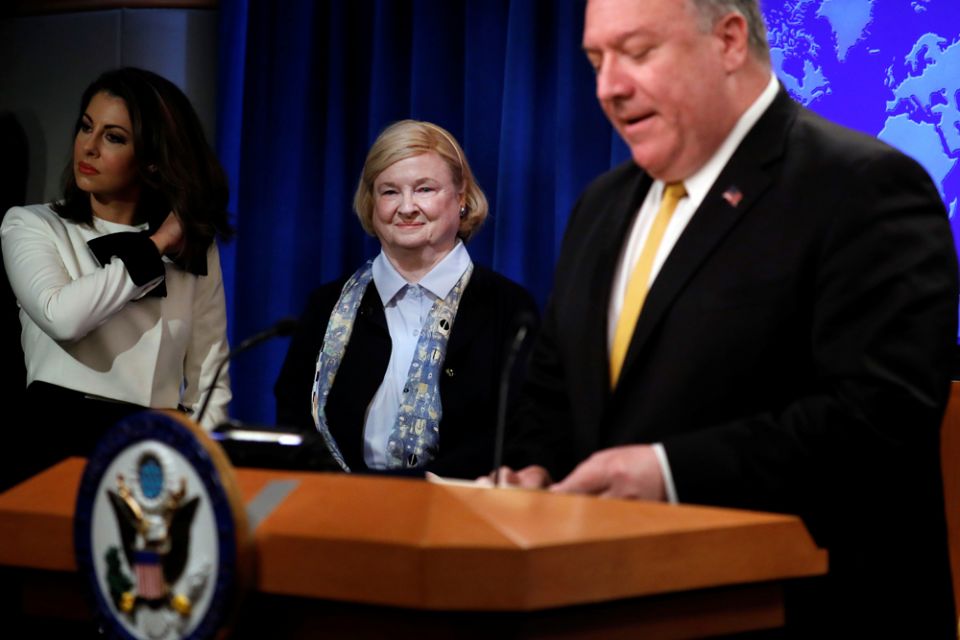 U.S. Secretary of State Mike Pompeo introduces Mary Ann Glendon, former U.S. ambassador to the Vatican, center, as the head of the Commission on Unalienable Rights at a news conference July 8 at the State Department in Washington. (CNS/Yuri Gripas, Reuters)

At RNS, Mark Silk has a really smart column looking at the new Commission on Unalienable Rights. Some are concerned that this commission will advocate for a more restricted enumeration of rights, e.g., the right to property, yes, but the right to health care, not so much. He rightly notes that commission chair Mary Ann Glendon did some of her best scholarly work supporting the Universal Declaration of Human Rights.

But the key observation, one I had never seen put so pithily before, is that the progressive desire to expand the concept of rights into the economic and social realm is really another way of fleshing out the common good:

A more nuanced way of understanding this habit is to see it simply as how Americans, with their libertarian tic, prefer to talk about duties to each other, as well as trees and animals. What is a "right to health care," after all, but a way of identifying a collective responsibility to provide health coverage to all members of society?

At The New York Times, David Super looks at the Trump administration's plans to cut millions of people off from receiving nutrition assistance and other programs designed to help the poor and to help others from tipping into poverty. As he notes, the rules seem designed for one purpose: cruelty. I hope the Democrats remember to mention these changes … to Iowa farmers.

At the blog Where Peter Is, Mike Lewis looks at the super-defensive response of Archbishop Charles Chaput when Villanova ecclesiologist Massimo Faggioli pointed out that the archbishop had sided with Archbishop Carlo Maria Viganò when the latter attacked the pope's character and called for his resignation. Does Chaput think we are stupid? Forgetful?

In The Washington Post, an excellent look at how pastors in Greenville, North Carolina, did, or did not, discuss the president's rally in their city where the crowd erupted in chants of "Send her back." A penetrating look at how the politico-theological complex, like the military-industrial complex, can distort reality and lose any critical sense. Here is another problem with proposals to include laypeople in selecting pastors: Those selected will be reluctant to challenge their congregations to stretch.

From the Jewish Telegraphic Agency, a news item that could cause me to rethink my long and deep commitment to Zionism: A dozen rabbis in the Israeli city of Elad ruled that dogs are bad and those who keep a dog are accursed.