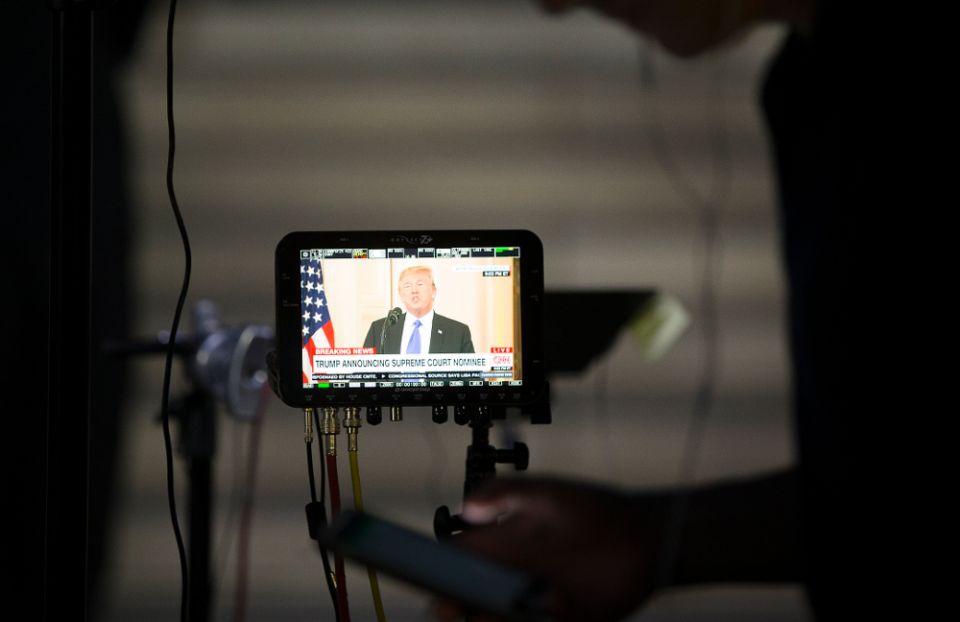 President Donald Trump is seen on a broadcast monitor outside the U.S. Supreme Court in Washington July 9. (CNS/Tyler Orsburn)

At Commonweal, Joseph A. McCartin on the Janus vs. AFSCME decision and what it means for the country and for Catholic social teaching. He notes that the decision was "no fluke" and traces the history to libertarian law professor Sylvester Petro. Petro was part of the Mont Pelerin Society of libertarians including Ludwig von Mises, Friedrich A. Hayek and Milton Freidman that Nancy MacLean wrote about in her book Democracy in Chains.

At U.S. Catholic, Meghan J. Clark on Mary Magdalene and her persistence. Just a splendid essay from one of the country's foremost moral theologians whose intelligence and holiness mix in really creative ways.

At Politico, Boston Mayor Marty Walsh on Trump voters whose profile is a lot like his own, except he is a liberal Democrat. He argues, correctly, that many of them have forgotten where they came from, but also points to ways the Democrats need to change in order to reconnect with them.

At Foreign Policy, Tim Gosling on how the European nationalists are running up against certain military and economic realities. Trump's decision to pump $12 billion into the farm states on account of his trade policies is an attempt to address and ameliorate the same realities. There are ways to step away from neo-liberalism. Neo-small-scale-fascism is not the way.

We are living in fact-checking's golden age. If you sell cacti, you hope for clear weather. If you sell willows, you hope for rain. If you are a fact-checker, you thank God for Trump. In the Washington Post, a look at four days of Trump's tweets and how filled they are with falsehoods or, as he would put it, fake news.

Also at the Washington Post, Elizabeth Bruenig on the deeper costs of the Trump presidency and how we will never be the same. The money quote:

And if Trump's campaign played along, those who benefited when he won don't really seem to mind. Republicans will issue all sorts of official-sounding tweets and news releases decrying the subversion of America's hallowed institutions, but they've got their tax cuts and Supreme Court seats, and they're not going to initiate impeachment proceedings or primary Trump come 2020. A neutral observer couldn't be blamed for concluding that the rich and powerful people who contend for control of the country don't much care how public offices wind up in their hands, so long as they do.

'Believe me,' says our president