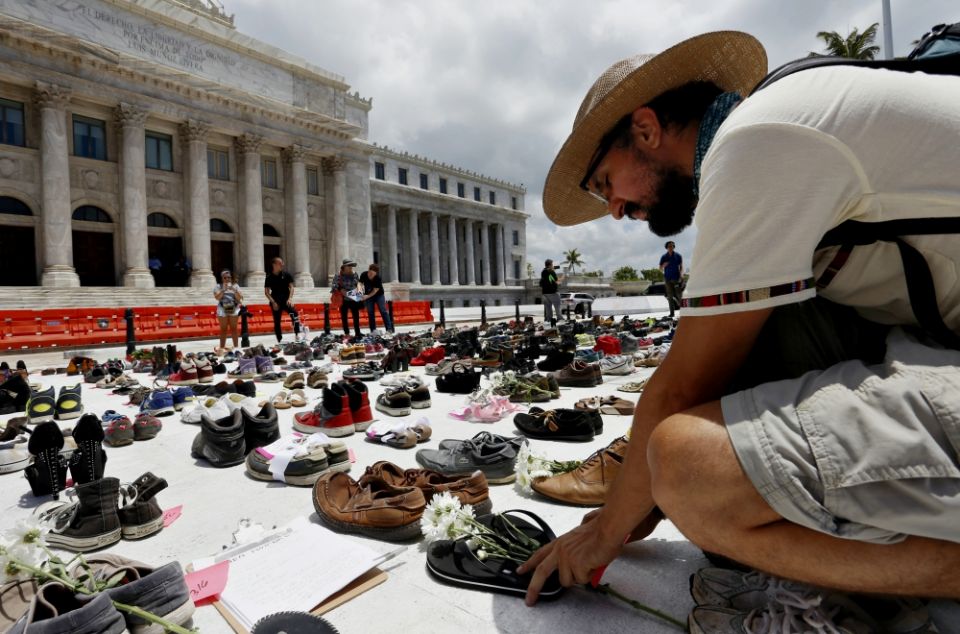 A man in San Juan, Puerto Rico, places a pair of sandals in front of the capitol building June 1 to represent those killed by Hurricane Maria. (CNS/EPA/Thais Llorca)

Let's start with some good news: At Ozy, Carly Stern reports on the millennials who are forming unions. The most encouraging sign is that these are real grassroots efforts, with workers recognizing the need to organize in their local workplace, not relying on established unions to parachute in and mount an organizing campaign. And these organizing efforts are occurring across different types of workplaces, from burger joints to IT firms.

In The New York Times, now that the primaries are over, what do the tea leaves say? I am not convinced that the anger against President Donald Trump will offset his support, which is so irrational to my mind and, just so, impossible to grasp or predict. I will say this about the Democrats: The liberal candidates who emerged in the Sunbelt have more in common with the moderates in the Midwest than NARAL wants either group to recognize. If they can figure it out, they can win in November and in 2020. If they can't figure it out? Grim, grim, grim.

I thought you had to be dead to be a saint. Apparently, in addition to believing they can save the church with "authentic reform," Tim Busch's Napa Institute also thinks it can replace the Congregation for the Causes of Saints and even bestow the dignity of the altar on someone still living, in this case "Saint Benedict XVI." As regular readers know, I deprecate this newfangled idea of canonizing popes: I think the skill set is quite different. But Benedict cannot be declared to be in heaven yet, at least not while he is still residing in a monastery within the Vatican. Besides, shouldn't Napa have to explain what they make of Papa Ratzinger's call for gift and gratuitousness in the modern economy before they try to appropriate his good name for their efforts?

From the "No sympathy for you" file, GOP gubernatorial candidate Ron DeSantis of Florida, a state with an increasingly important Puerto Rican population, issued a statement distancing himself from Trump's claim that 3,000 people did not die as a result of Hurricane Maria last year. Trump, whose ego is more fragile than the electric grid in Puerto Rico, is reportedly furious with the man he catapulted to the top of the polls in the Republican primary. DeSantis is also the one who sent out a pretty racist dog whistle within 24 hours of earning a black challenger. No sympathy for him. Politico has the story.

Relatedly, Lynn Goldman of the Milken Institute School of Public Health at George Washington University explains the methodology she and her colleagues used to calculate the death toll in Puerto Rico. They did not figure the president's ego into their equation.

I have been working with Catholics from Eastern Europe this week and they are very nervous. The vacuum caused by Trump's abandonment of traditional allies and his coziness with Vladimir Putin is an obvious danger. A friend reminded of the last time the U.S. government was totally feckless in this region: The result was the rape of Bosnia, culminating in mass genocide in Srebrenica. And we knew what was happening, as this article in The Guardian explains. This article in The Washington Post by Gen. Wesley Clark also attested to the growing threats in the region. At commemorations of the Holocaust, politicians piously promise, "Never again!" They did not mean it in the 1990s in Bosnia or Rwanda. Will we mean it now?