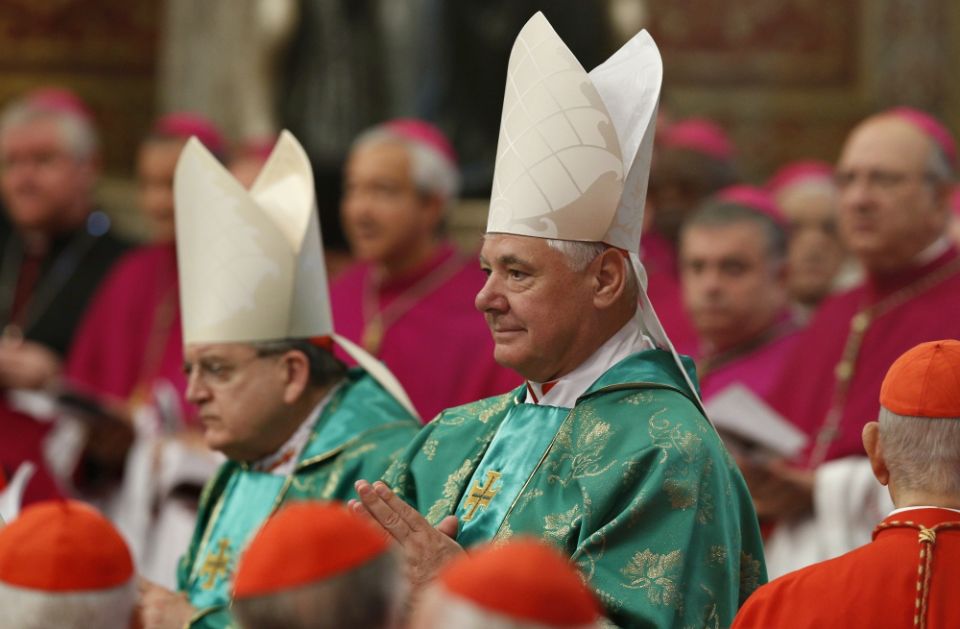 Cardinal Raymond Burke, then-prefect of the Apostolic Signatura, and Cardinal Gerhard Müller, then-prefect of the Congregation for the Doctrine of the Faith, arrive in procession for a Mass celebrated by Pope Francis to open the Synod of Bishops on the family in St. Peter's Basilica at the Vatican Oct. 5, 2014. (CNS/Paul Haring)

My vote for most despicable person in the world for 2018 goes to Fr. Gerald Murray, who wrote in First Things: "The fact that Pope Francis refused to answer questions about Viganò's charges on the flight back from the World Meeting of Families in Ireland is telling. How likely it is that an innocent man would let these multiple serious charges of malfeasance remain unanswered?" I suppose Murray has spent so much time in the EWTN gutter, he can't recognize that a perfectly innocent man might decline to get down in the gutter with Archbishop Carlo Maria Viganò and his demonstrably false charges.

At WherePeterIs.com, Mike Lewis analyzes the key players in the attack on Francis, of which Viganò's dossier was only the spear point: The money quote: "Anyone who is not taking Viganò's document with a huge grain of salt is either showing their bias or is unaware of the forces at play."

From the other end of the spectrum, Maike Hickson at LifeSiteNews claims that Cardinal Gerhard Müller was sacked as prefect of the Congregation for the Doctrine of the Faith because of the hard line he took on sex abusers. There is no evidence offered for the claim and I can assert with moral certainty, if not with on-the-record quotes, that Müller was sacked primarily because he could not organize a one-man band, let alone a Vatican dicastery. I have not been able to confirm additional issues, but I can assert that it had nothing to do with handling clergy sex abuse. I will also suggest journalists consider what Müller shares with the only other cardinals Francis demoted: Mauro Piacenza and Raymond Burke.

If that last sentence seems too opaque, think about the way the right wing held up the statement of Msgr. Jean-François Lantheaume to confirm Viganò's testimony. Lantheaume belongs to the small but influential Community of St. Martin, a group of disgruntled French clergy (I know, I know, that is redundant) formed in the 1970s who, failing to find a French bishop who would give them canonical institution, turned to Cardinal Giuseppe Siri, the archconservative archbishop of Genoa, Italy, and dauphin of Pope Pius XII. They are one step short of the Lefebvrists. Their most prominent member to date is Archbishop Ettore Balestrero, who had been assessor at the Secretariat of State until, in the brief time between Pope Benedict XVI's announcement he was resigning and the day that resignation took effect, Balestrero was named nuncio to Colombia, ordained an archbishop and shipped out of Rome six days before Benedict stepped aside.

In other news, Warren Buffett announced that his company, Berkshire Hathaway, collected a $29 billion windfall last year due to the Trump tax cuts. Billion, with a B. One company gets the same amount that could have been a $1,000 bonus to 29 million workers, that is, more than all the workers in Michigan, Ohio, Wisconsin, Pennsylvania and Florida combined!