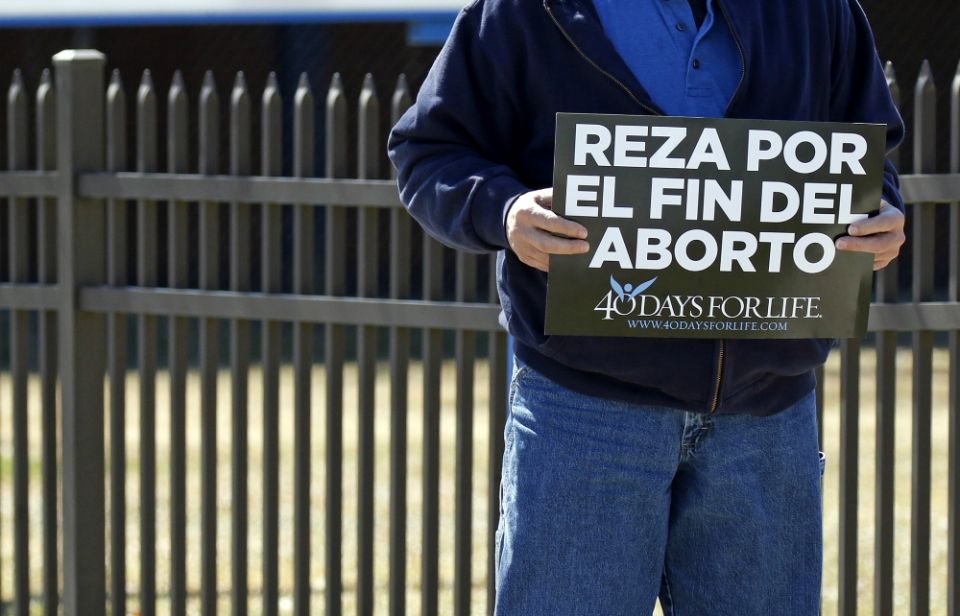 A Spanish-language sign that reads, "Pray for the end of abortion," is seen at a vigil near the entrance to a Planned Parenthood center in Smithtown, New York, March 26. (CNS/Gregory A. Shemitz)

In The Washington Post, the limits of religious freedom. Owners of a wedding venue refused to host a ceremony because the couple was interracial. The owners cited their faith as the reason for their decision. You can search through sermons in the mid-20th century and find ample examples of Scripture being invoked to defend segregation. How is this different from refusing marriage? This sad story also explains why so many white evangelicals support Trump: When asked to explain her reason, the owner refers to her "Christian race — I mean our Christian belief." Dr. Freud, call your office.

From our friends at America magazine, a look at Latino voters and how they view pro-life issues. Every Democrat seeking the votes of Latinos should read this piece, show it to their friends at NARAL and Planned Parenthood, and explain why they will no longer be beholden to the late-term abortion orthodoxy being forced on the party.

Here is an issue on which Democrats should stand up to the abortion rights groups: In Vermont, a nurse was forced to participate in an abortion despite asking to be excused from the procedure. Forget about religious liberty and the exemptions it should confer: The violence of the act itself should be sufficient to justify anyone's refusal not to participate. And any conception of liberty that confers the right to procure an abortion surely also confers a right not to perform one. The great Emma Green at The Atlantic has the story.

This article by Sean Dailey is sure to cause a stir. I think he is overly broad in condemning "Catholic journalism" in toto based on a single, biased article from the Catholic News Agency. But he is on to something. Catholic journalism is mostly practiced by Catholics. We have a dog in the intraecclesial fights, so bias exists. It is why we need to draw clear distinctions between reporters and columnists. Columnists traffic in opinions, although a lot of reporting goes into the formation of those opinions, so we have to lean into the subject. But reporters need to play it straight.

At Commonweal, James Chappel, the bright new star at Duke, reviews George Weigel's latest book and pronounces it "dangerous." The review is devastating and brilliant. I was planning on reviewing the book also, but methinks Chappel has given the final word.

Also at Commonweal, Massimo Faggioli looks at the rifts within the church today in the context of schismatic movements since Vatican II. He coins the very useful term "para-schismatic." If you doubt the reach of these para-schismatic tendencies, look at this post at WherePeterIs that features excerpts from recent talks by Cardinal Raymond Burke. It is shocking what the cardinal said, but also betrays the un-Catholic theological perspectives that have taken hold on the goofy right. At one point, Burke is condemning something Pope Francis wrote and states: "This is simply not any language; this doesn't have any doctrinal import to it. What does it mean to say something isn't admissible? That is a relative term, either say it's intrinsically evil, or it's good." It has been some years since I studied moral theology, but I am pretty sure "intrinsically evil" and "good" are not the only two categories.

I complain with some frequency about the litigiousness of American society. I present a new piece of evidence that is incontrovertible: A man went to Popeye's for their new chicken sandwich, and they had sold out. He is suing them.

For something light and fun: This is the 150th anniversary of the founding of Ohio State University. I have never been to the school, nor even to Columbus where it is located. But I was once in marching band and if you like marching bands, you will love this video, in which the current band is joined by alumni to take a trip down musical memory lane. Then they form not one, but four, of their famous script spellings of Ohio. Just splendid.