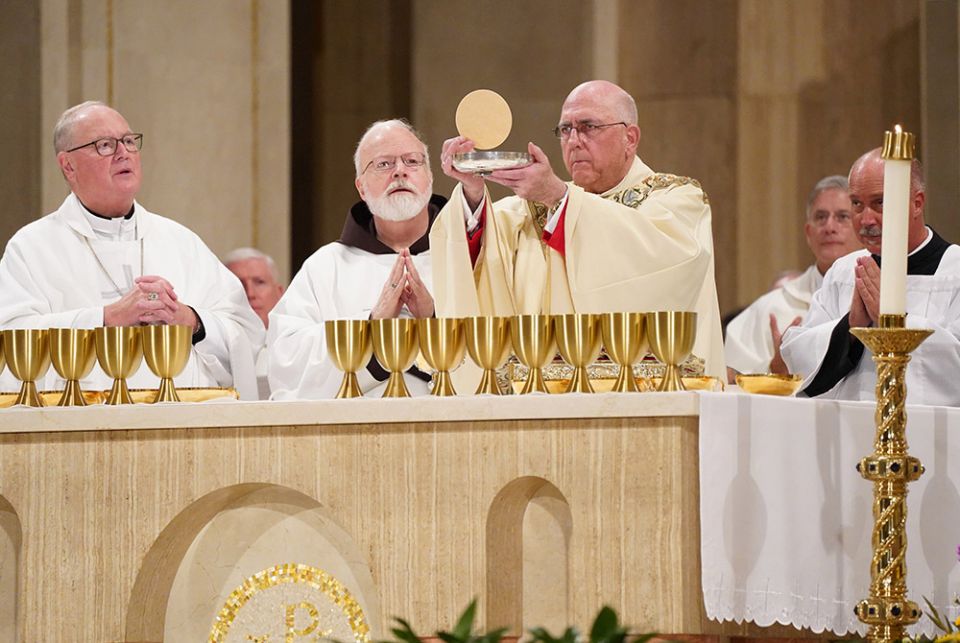 Cardinals Timothy Dolan of New York, left, Sean O'Malley of Boston, and Archbishop Joseph Naumann of Kansas City, Kansas, concelebrate the opening Mass of the National Prayer Vigil for Life Jan. 23, 2020, at the Basilica of the National Shrine of the Immaculate Conception in Washington. (CNS/Gregory A. Shemitz)

At Politico, Gabby Orr and Meredith McGraw pen one of the most incisive articles about former President Donald Trump's current political status: He is not the "Godzilla in exile" that many feared but is adrift and unsure. Turns out, politics is largely about the acquisition and allocation of power and he lost much of his in the past few months, not only when he left office, but when his coattails could not help Republicans in Georgia hold on to two Senate seats.

In The New York Times, a report on the last-minute insertion of aid to private and religious schools in the American Rescue Plan. It turns out one of the key players was Randi Weingarten, the head of the American Federation of Teachers. "The nonwealthy kids that are in parochial schools, their families don't have means, and they've gone through COVID in the same way public school kids have," she told the Times. Amen.

In the LA Times, a report on the reopening of the second oldest church in the Americas, the church of San Jose in Old San Juan, Puerto Rico. This has long been my favorite church on the island: The Habsburg coat of arms are still hung on one of the walls. It was begun in 1532, so it is one of the few gothic churches in the U.S. St. Patrick's in New York and Holy Name in Chicago are gothic revival structures from the late 19th century. San Jose is gothic because that is how they built churches in the early 16th century. Here is a photo of the inside:

At The Atlantic, Emma Green interviews Archbishop Joseph Naumann, chair of the Pro-Life Activities Committee. He really seems not to grasp the danger of treating the politics of abortion with the same moral categories that we treat abortion itself, and so complicity is all the same. It is a profoundly tendentious approach that is not in the least consistent with Catholic theological tradition.

At PsyPost, a new study indicates that people who identify as religious are better at warding off depression because their religion provides them with a sense of meaning and purpose. I am sure this is true, but I am also indifferent to it. The reason to believe is not — it cannot — be any such utilitarian calculation. The faith is not an antidepressant. Either you believe in the ontological claims of your faith, or you don't, and those claims cohere with your lived experience. Marx said religion was an opiate. Maybe it is, but the tomb is still empty and it is that latter fact that is decisive for the Christian.

At RealClearPolitics, Peter Berkowitz skewers a recent article by Michelle Goldberg in The New York Times, in which she attempts to defend free speech by exposing conservative hypocrisy. Berkowitz has the better of the argument: There are good reasons to criticize conservatives for all manner of hypocrisy so why misrepresent their positions to make a point? The key problem with Goldberg's argument is not unique to her, a conflation of criticism with "cancellation" and both with censorship.

From the Religious Liberty Initiative at the University of Notre Dame Law School, news about an amicus curiae brief filed on behalf of litigants challenging the exclusion of religious schools from a program in Maine that provides aid to private, secular schools. I can understand why some people make the case that no public monies should support private schools, but to support some and not others because the others are religious? That is the kind of misapplication of the relative merits of the disestablishment and free exercise clauses that should be ruled unconstitutional.

From Channel 10 in Boston, after getting his COVID-19 vaccine, cellist Yo-Yo Ma joined the other recipients in the observation area where they waited for 15 minutes to make sure they had no adverse reactions. Instead of reading a magazine, Ma brought his cello and serenaded the health care workers and the vaccine recipients.

Your thoughts on the extremist attitudes of abortion