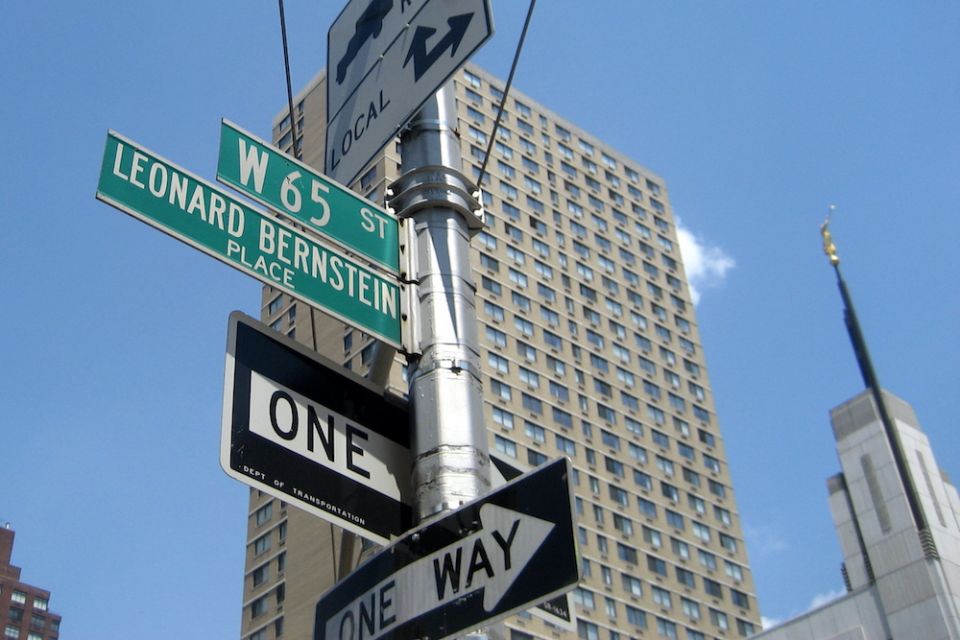 Street signs in New York, June 2007: On May 28, 1993, New York City Mayor David Dinkins signed a bill naming West 65th Street between Amsterdam Avenue and Broadway in Manhattan "Leonard Bernstein Place," and on Aug. 25, which would have been Bernstein's 75th birthday, Dinkins renamed the corner in a ceremony before a special concert at Alice Tully Hall. (Flickr/Wally Gobetz)

In The Washington Post, a report on WITF, an all-news local radio station in Harrisburg, Pennsylvania, that pledged never to mention any politician who participated in the assault on the election process without mentioning that assault as well as whatever news the politician is making that day. Let's hope this is contagious and I will try and follow that rule here.

Relatedly, and also at WaPo, Ashley Parker and Marianna Sotomayor show that denying the results of last year's election has become a kind of loyalty test for the Republican Party. Think about that for a minute, and maybe for more than a minute: How much disinformation needs to be present to make such a thing possible?

The Salt Lake City Tribune reports on the state GOP convention at which Sen. Mitt Romney was booed, as was the state's governor. I have never been a fan of Romney's politics, but it seems impossible to question his character after his willingness to stand up for the Constitution last year. If the GOP wishes to exile him and those like him, they are headed for self-destruction and it couldn't happen to a nicer party.

At Politico, Renato Mariotti looks at Rudy Giuliani's legal troubles and what that may portend for former President Donald Trump. When Trump's previous personal attorney, Michael Cohen, went down, the president was shielded by reason of his office. Now he is not. The whole mess really makes the case that the Trump presidency was more like a mob operation than a political one: In the end, they all rat each other out.

In The New York Times, a look at how the GOP is doing all it can to cement the gains it made among Latinos in south Texas in 2020. The key? Latinas who are now the face of the GOP in that area. What drove many of these Latinas to join the Republicans? The radicalization of the Democrats on cultural issues like abortion and guns. I think there is a way to massage the gun issue, but abortion extremism continues to cost the Democrats election victories, and demographics will not resolve that fact.

Sticking with Texas, our friends at the Texas Politics Project at the University of Texas at Austin have some new survey data that touches on election law reforms, attitudes toward the pandemic and the energy blackout that hit the state in February. Take a moment to dig into their extensive survey information across time about the pandemic. Only 24% of Republicans in the state think the coronavirus is "a significant crisis," down from 48% who believed the same a year ago. There is a one-word explanation for this: Trump. The former president and his wife got vaccinated quietly in January. Imagine if he had told his followers that getting vaccinated was the patriotic thing to do?

From the Connecticut Post, U.S. Rep. Rosa DeLauro defends the honor — and the flavor — of Connecticut's pizza after Food & Wine magazine regrettably declared that New Jersey has better pizza than Connecticut. Puh-leeze! DeLauro is better known for her leadership on a variety of progressive causes over the years, but this cause transcends politics. From the thin crust clam pizzas of her native New Haven to the Greek-style thick crust of the Quiet Corner (the northeast corner of the state), Connecticut pizza rocks. 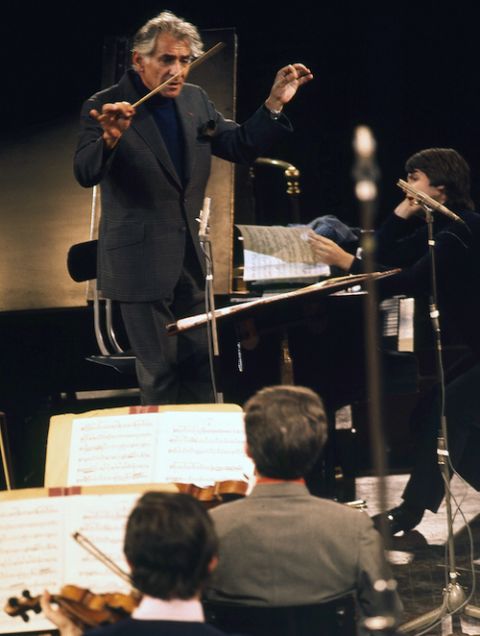 Last week in this space, I noted the death of the great mezzo-soprano Christa Ludwig and linked to a performance in which she sang "I Am Easily Assimilated" from Leonard Bernstein's "Candide." I incorrectly stated that this was the last thing Bernstein recorded when, in fact, it was the last studio recording he made. An astute reader called my attention to the error, noting that later in that same month of December 1989, Bernstein went to Berlin — where the Wall had just come down — and conducted a celebrated performance of Beethoven's Symphony No. 9. In the great fourth movement, the choir changed the word "Freude" to "Freiheit." I remember watching it and being brought to tears, which makes my mistake all the more grievous.

What is more, this astute reader informed me of something I did not know, that a recording was made the following year of Bernstein conducting Beethoven's Symphony No. 7 and 4 Sea Interludes by Benjamin Britten at his beloved Tanglewood. Here is the Beethoven. Those of us who are a certain age, and grew up with the master's concerts for young people, never tire of listening to his magnificent performances.

Catholic mob rule and those who support it

Why is it so hard to force Donald Trump off the political stage?