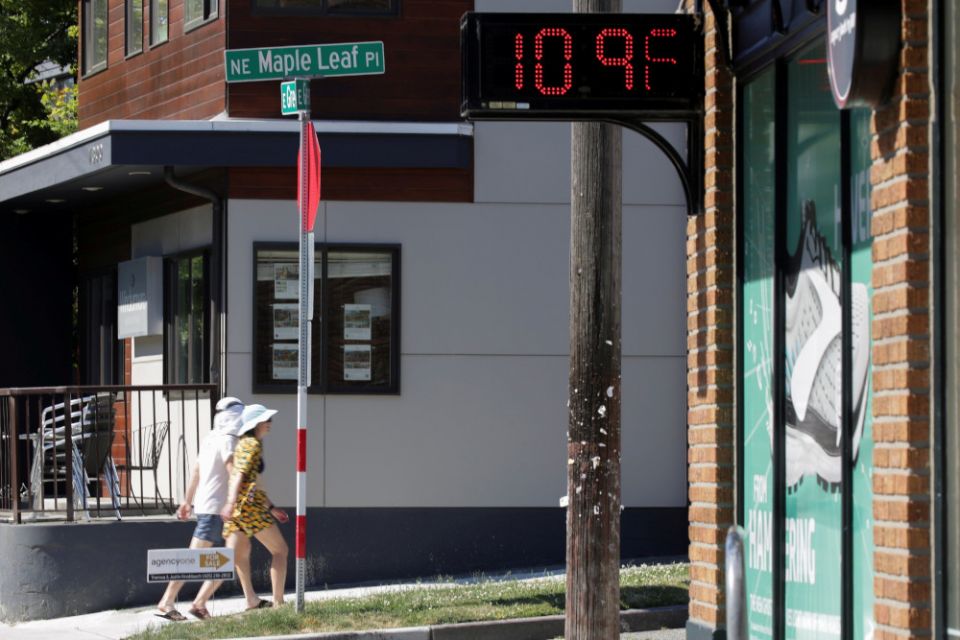 A digital sign in Seattle shows a temperature reading of 109 degrees Fahrenheit on June 28. (CNS/Reuters/Jason Redmond)

Scariest news story of the year? At Axios, a wealthy GOP donor from Tennessee is paying for South Dakota National Guard troops to be deployed at the U.S.-Mexican border on orders from Gov. Kristi Noem. How is this possible? Is it legal? Is this just high-end vigilantism? Where is the U.S. Department of Justice? And — is this what it takes to win the GOP presidential nomination in 2024?

In The New York Times, Michelle Cottle provides an annotated copy of a letter from Wisconsin State Senate President Chris Kapenga, holding it up as a model of Trump-worshiping sycophancy. Cottle is one of the only columnists who can pull off deploying humor to dramatize what is truly scary, and this is one of her best.

In The Washington Post, Paul Waldman brings two national stories together: In D.C., one of the demands GOP senators made during infrastructure negotiations was that the bill not include any funding for proposals to fight climate change, while in the Northwest, an unprecedented heatwave points to the rise in severe climate events. The GOP strategy on climate change — to play an ostrich and put their head in the sand — is daily exposed as the fraud it always was.

If you are looking for some measure of how beholden the GOP is to the fossil fuel industry, historian Heather Cox Richardson's post on June 29 discusses legislation passed into law in 10 Republican-controlled states that makes it harder for municipalities to take actions — like banning the introduction of fossil fuel infrastructure in new buildings — that might actually help put the country, and the planet, on a safer energy path. It is one thing to oppose such efforts, but blocking them altogether?

In the Hartford Courant, a look at the controversy surrounding the bishops' document on Communion. The reporter, Daniela Altimari, interviewed me and I am thinking this quote could serve as my epitaph when the time comes:

Winters said the issue isn't about abortion. "It's about politics. And if the gospel of Jesus Christ and an affiliation with the Catholic Church cannot be born in a liberal heart or a conservative heart, then we've misunderstood it for 2,000 years."

My motto for 2021: The opposite of Catholic is not Protestant; it is sectarian.

From Design Boom, a look back at the creation of New York City's Central Park complete with many wonderful old photographs. The article discusses the design competition which ended, happily, with the commission going to Frederick Law Olmstead and Calvert Vaux. Many of the features they designed are still prominent landmarks in that greatest of urban parks.

More interesting info about Meryl Streep's remarkable performance in "The Devil Wears Prada," this time from "Showbiz CheatSheet." It turns out that she did not model her role as Miranda Priestly on Vogue editor Anna Wintour as many surmised, but on Clint Eastwood! Who knew? Wherever she got the inspiration, Streep was nominated for the Oscar for her performance but lost to Helen Mirren whose memorable performance in "The Queen" was magnificent, but I still would have given the award to Streep.

US Catholic church is failing to respond to climate emergency, theologian says