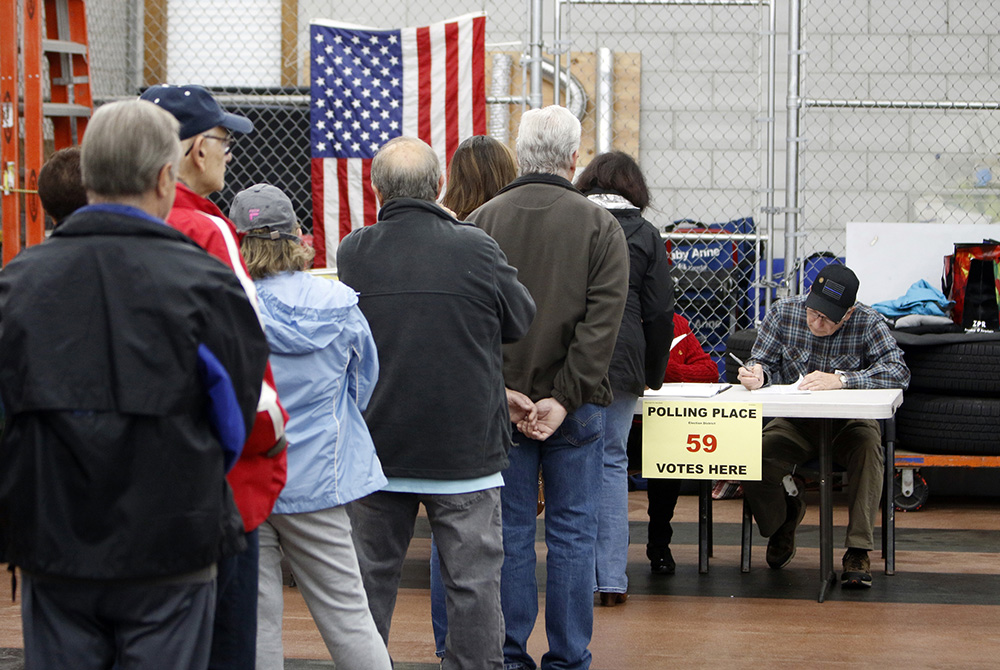 Voters line up prior to casting their ballots Nov. 6, 2018, at a polling station in Nesconset, New York, on Election Day . (CNS/Gregory A. Shemitz)

At Politico, Charlie Sykes looks at why Republican Congressman Anthony Gonzalez, one of the few Republicans to vote to impeach Trump the second time, decided not to seek reelection, despite having outperformed Trump in his Ohio district and having plenty of campaign cash to spend:

This was the key to his decision to self-purge: He could spend a year fighting off merde-slinging deplorables, only to win another two years sitting in a caucus next to Reps. Marjorie Taylor Greene (R-Ga.), Madison Cawthorn (R-N.C.), Paul Gosar (R-Ariz.) and the other avatars of Trumpism.

Setting aside the fact that this is not the stuff of a profile in courage, the decision not to run shows how the cancer of Trumpism has corrupted the entire party.

In The New York Times, Clay Risen looks at some key governor's races in next year's midterms, and argues that they may be more predictive of Trump's residual electoral strength than congressional contests, especially because so many governors have become embroiled in the culture wars surrounding the fight against COVID-19.

At Commonweal, Austen Ivereigh has an excellent essay about the forthcoming synodal process. He highlights the changes Pope Francis has already introduced into the way synods are conducted and reminds readers that, yes, in our tradition, synods are consultative and entail discernment, but decisions are left to the bishops and especially the Bishop of Rome.

In the Pittsburgh Post-Gazette, Duquesne law professor Bruce Ledewitz argues that the Texas anti-abortion law is so vicious and dishonest he is resigning from the pro-life movement. He explains how he became a pro-life Democrat with compelling reasons. Sadly, we are a dying breed.

At Religion News Service, Mark Silk makes a convincing argument that the prophet for our time is Jonah. "In a world where rage, feelings of victimization and a refusal to admit mistakes has become the dominant leadership style, Jonah serves as an excellent role model," Silk writes. Jews close out Yom Kippur with a reading of the Book of Jonah and Silk offers a splendid exegesis of the text.

At The Washington Post, the great Roxanne Roberts reviews the FX series "American Crime Story: Impeachment" and explores the ways the investigation into President Bill Clinton's sexual escapades with Monica Lewinsky forced the country to talk about sex in a way we had avoided up until then. Those of us of a certain age remember parents complaining about having to explain the meanings of certain vulgar phrases years before they had planned to do so. The idea that the awkward conversations made the #MeToo movement possible is unpersuasive: It played a small role in accelerating a volcano that was due to blow with or without the blue dress saga.

I confess I am a sucker for top 10 lists and similar efforts to focus on a particular aspect of our culture by highlighting the best that aspect has to offer. But the BBC's music magazine has listed the "Six of the best pipe organs in the world" and the list is terrible. I concur with the placement of the Cavaillé-Coll organ at St. Ouen in Rouen on the list, but it is an abbey church, not a cathedral. The cathedral in Rouen is dedicated to the Virgin Mary under the title of her Assumption and you will recognize it from the magnificent paintings of its façade by Claude Monet. The Silbermann organ at Freiberg Cathedral is an obvious choice but why are there no instruments built by Arp Schnitger, the great organ builder in Holland and north Germany? And the Wanamaker (now Macy's) department store organ in Philadelphia is huge, but one of the best in the world? Hardly. Indeed, there were no small instruments on the list even though John Bromaugh's instrument at the Fairchild Chapel at Oberlin College is extraordinary, and the Flentrop at Adolphus Busch Hall in Cambridge, Massachusetts, is likely the organ heard on more recordings than any other because E. Power Biggs recorded the entire Bach repertoire on it.

And for those who think of organ music as dull and churchy: Here is Jonathan Scott playing a transcription of the Presto section of Vivaldi's "Summer" from "The Four Seasons" on the Bridgewater Hall concert organ built by Marcussen, a Danish firm that has built some extraordinary instruments also.