May the renewed religious left avoid the religious right's mistakes 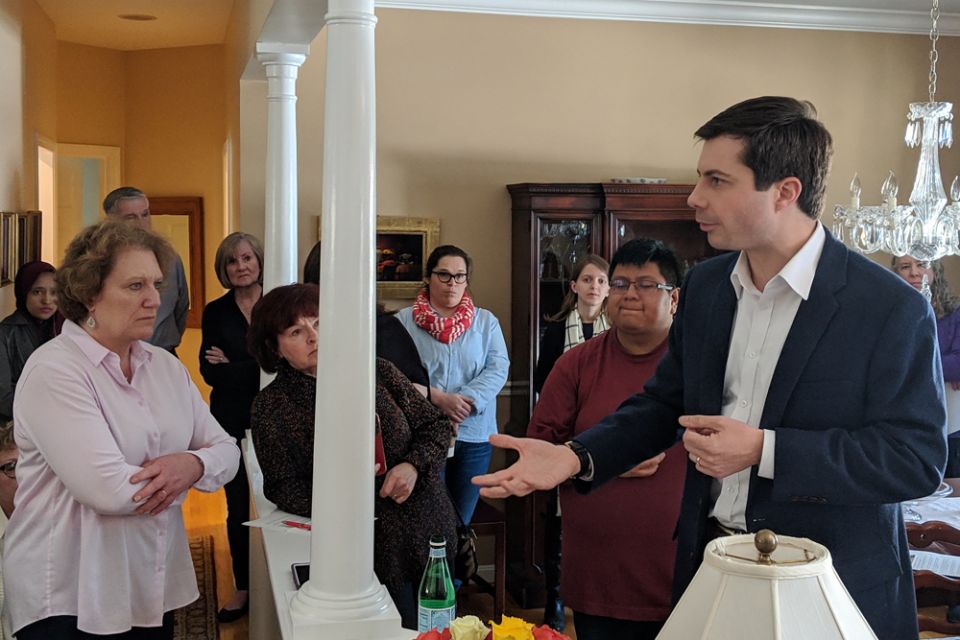 Upon reading article after article about the increasing secularization of society, the rise of the "nones," and how they are gravitating towards the Democratic Party, one of the most surprising developments in the new election cycle has been the emergence of a Christian Left.

First, in his CNN town hall, Mayor Pete Buttigieg was asked about his fellow Hoosier Vice President Mike Pence and he went right for Pence's religious right jugular: "Is it that he stopped believing in Scripture when he started believing in Trump?" He has since spoken about his faith at every opportunity and explicitly called for a rising up of the Christian Left to balance out the Christian Right. Pictures of him getting married to his husband in South Bend's Episcopal cathedral tend to accompany profiles of the mayor.

Then, it was Sen. Elizabeth Warren in her CNN town hall. When asked about her faith she misidentified the scriptural verse, but she grasped the essence of Matthew 25 and explained with remarkable passion that the parable did not merely confer an ethical standard, although it certainly does that, but that it calls its listeners to action.*

Finally, Sen. Cory Booker quoted St. James — "faith without works is dead" — and spoke about his commitment to radical love, about which I wrote last week. He also gave a big shout-out for tolerance, saying "I would rather hang out with a nice atheist than a mean Christian any day of the week," and talking about people of all faiths greeting Muslims at the airport after the courts overturned Trump's Muslim ban. Booker may be the most fluent in the language of religious faith of any of the Democratic candidates.

What are the possibilities and the potential pitfalls of this renewed interest in religion on the left?

The focus on sexuality as the key indicator of Christian identity has always been one of the odd and remarkable hallmarks of Catholicism in America. Catholic cultures — Italy, Spain, France — are not known for any puritanical dispositions regarding human sexuality. But, in America, the ambient Calvinism of the religious culture combined with the Jansenistic impulses of Irish Catholicism to make a concern for sexual purity an obsession. The three Democrats discussing their faith are right to insist that any fair reading of the Gospels reveals that the Lord Jesus spent far more time urging his disciples to be generous to the poor, welcoming to the stranger, and treat people with dignity than he did discussing any sexual issues.

In our day, this focus on sexuality has resulted in a deeply regrettable and disproportionate fixation with homosexuality, a fixation found on both sides of the partisan divide. (Abortion, also a central focus of the U.S. church, is an issue of human rights for most Catholics, not a sexual fixation.) The worthy cause of religious liberty is being damaged by the efforts of some churchmen and church groups to justify simple discrimination under the guise of religious freedom. I tend to agree that, as a matter of law, a church, mosque or synagogue has much greater latitude to decide whom to hire because the First Amendment confers such latitude. We do not want government telling religions what to believe, whom to hire, etc. That said, we Catholics should stop discriminating against gay people qua gay people. Of course, the church has the right to fire someone who aggressively undermines any of its teachings, but I do not think that is the case in most of these examples of gay teachers or choir directors being fired.

The First Amendment swims in two directions, protecting the freedom of religious expression and stipulating the separation of Church and State. Only recently did religion in the public square become so heavily identified with the political right. I hope that the religious left will not make some of the mistakes that the religious right did.

At the top of that list of mistakes is the conflation of religion and politics. As Robert Christian recently argued in an article in Church Life, an ignorance of Catholic social teaching has resulted in a situation in which "many Americans let their political ideology or partisan identity shape their faith and political behavior, setting aside Christianity's radically countercultural demands." Religion is made to baptize political programs rather than challenge them, robbing religion of one of its perennial contributions to society, the ability to provide a serious critique of political life.

In an appearance on "The View," Meghan McCain said that she did not like thinking of religion in terms of left or right. Instead, she proposed the categories "hypocritical" and "non-hypocritical" faith. Mayor Pete noted that in the Christian Scriptures neither politicians nor priests fare very well on this score, but he argued that in the Midwest, you need to speak in religious idioms. As I noted last week, political renewal in American history always comes with large helpings of religious inspiration and symbolism, and I suspect that even in our more secular age, this is still the case.

More important, Mayor Pete said that his political values flowed from his religious ones, not the other way round. We do not know if this is true as we can't look into his soul. The inability to include unborn children within the compass of concern and solidarity raises a prima facie suspicion that he, like his conservative counterparts, is content to squeeze his religious values into his political positions and not be challenged to think anew why he is so concerned about the undocumented and the unemployed but so indifferent to the unborn. We live in hope that someday, something will happen in our culture that will expose this hypocrisy to those who hold it.

Another major concern is that the religious left will, like its conservative counterpart, deploy its values in highly selective ways. In our day, no value is more celebrated on the left than diversity, but that celebration is often marred by perverse moral valuations: Diversity by race, gender, gender identity, sexual orientation, these are all things to be celebrated but diversity of opinions, not so much. At the Daily Beast John Aravosis wrote about the "insanity" of those who criticize Mayor Pete because "he is not gay enough" or because as a white guy, being gay doesn't really make him much of a contender in what Aravosis brilliantly dubs the "oppression Olympics." Regrettably, Aravosis himself has to give a nod to the oppression police, listing the many ways gays have been persecuted through the centuries. Read some of the links he provides and you will find some arguments that are just as bigoted in their way as anything Mike Pence has ever said. Is it me, or do some leftie intellectuals seem to rush to a caricature of their values as a moth to a flame?

I also suspect that there is no way to avoid on the left the reduction of religion to ethics that has occurred on the right. In our pluralistic democracy, dogmas must be left at the door to the public square, religious leaders are permitted a voice in politics as ethical experts, and our self-awareness of ourselves as believers changes. As Pope Benedict said in his encyclical Deus Caritas Est, "Being Christian is not the result of an ethical choice or a lofty idea, but the encounter with an event, a person, which gives life a new horizon and a decisive direction." When this gets obscured, our religion becomes something we humans can too easily manipulate. It loses its radicalness. Its claims, ethical as well as dogmatic, cease to be credible because they grow attenuated from their source in the mystery of the Incarnation. This is not a concern proper to the politician, for whom the health of the churches is not a constitutionally prescribed task, but it should be to serious Christians.

So, the verdict on the rise of a putative religious left is mixed. It is refreshing to see candidates on the left explaining their commitments in religious terms, linking their policies to explicit Bible verses, refusing to cede the fertile rhetorical and moral turf of religious experience to right-wing bigots. The fact that these candidates are not particularly deep theologians is a little frustrating, but it would be worse if they were trying to be theologians. My colleague Fr. Dan Horan published a biting essay last week about "armchair theologians" and their limits. Those limits, if combined with political power, can be decidedly dangerous. We are electing a president, not a pastor or a preacher, and the calculations we expect from a political leader are different from those we desire in a religious leader.

On the other hand, we have yet to see any Democratic candidate refuse to buckle under the demands of politically correct activists whose endless demand for apologies and ideological purity make all the candidates look weak. The election of 2020 is a long way in the distance, and it is difficult to perceive all the valleys and hills between now and then, but this much is clear: Religion provides a critical perspective on society, but if the left uses religion as the right does, to baptize its positions already arrived at by different means, the Democrats will have lost an opportunity in their struggle to hurl Trump from office. The voters do not want a president who is constantly bowing before the pagan altars of the gods of political correctness. Religion could provide a way to balance out competing values, if only someone will engage it as a prod, not a prop, to their politics.

*This column has been updated to correct that Buttigieg's town hall preceded Warren's.

Amid the pandemic, finding peace in pie