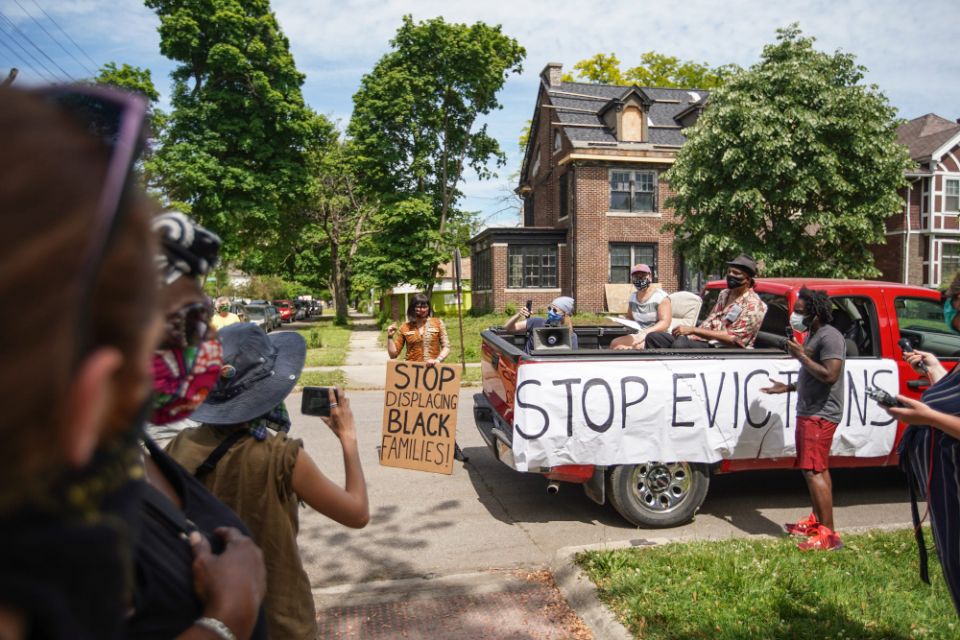 Tristan Taylor of Detroit speaks to people gathered June 9 during a caravan protest through Detroit neighborhoods while calling for relief for tenants and mortgage borrowers during the coronavirus pandemic. (CNS/USA Today Network via Reuters/Ryan Garza)

The Treasury Department and Small Business Administration, under pressure from congressional Democrats, have released information about who received federal assistance under the terms of the Paycheck Protection Program.

The program allowed companies with fewer than 500 employees to seek government help during the pandemic, and the loans only become non-refundable if certain conditions are met. Most importantly, that the bulk of the money go to payroll expenses and that the companies not terminate employees during the time of the loan.

The program was one means by which the federal government pumped money into the economy at a time when it was contracting feverishly. Most economists predict that the world's economies will actually contract this year, losing as much as 2.4 percent of the value of their GDP.

Behind those numbers are people who are now unemployed or underemployed, struggling to make ends meet, uncertain about the future. For the millions of Americans who live paycheck to paycheck these are very dark times.

The Paycheck Protection Program, along with other emergency measures, such as increasing unemployment benefits and forbidding evictions, helped to prevent a downward spiral from making the economy worse. The idea was to pump cash into the economy by virtually any means in order to prevent a negative domino effect — a waiter loses his job, so he can't pay the rent, and the landlord is having trouble making ends meet, and she misses her mortgage payment — from making the economy even worse.

Americans are now heading into a new phase of coping with the economic consequences of the virus. Moratoria on evictions are ending. Ending, too, are the increased unemployment benefits. Anyone laid off in February may have been able to keep their health insurance through Cobra, but that is for six months, and six months is probably up in August for most.

If you think things are bad now — and the period when emergency measures end and a return to normalcy begins are always difficult — they are about to get much worse, and worse for largely preventable reasons.

Fifteen states chose not to expand access to Medicaid under the terms of the Affordable Care Act, most of them deeply conservative states that were opposed to the Affordable Care Act to begin with. While all states are overwhelmed with new applications for this and other forms of government assistance, the populations in the non-expansion states face additional hurdles.

Project Hope's Health Affairs newsletter contained a report that "rates [for improving enrollment access] declined sharply for non-expansion states compared to expansion states for strategies such as having information on the state department of health's website on Medicaid enrollment during COVID-19 and the state accepting self-attestation of criteria besides citizenship/immigration."

Look for health care differentials, and resultant budgetary consequences, between the expansion and non-expansion states to become a bigger news story in the weeks and months ahead.

If you think things are bad now — and the period when emergency measures end and a return to normalcy begins are always difficult — they are about to get much worse, and worse for largely preventable reasons. Due to the failures of President Donald Trump and those Republican governors who insisted on downplaying the threat of coronavirus and the steps needed to reopen the economy safely, certain businesses, such as restaurants, bars and gyms in large metropolitan areas, are being forced to close again.

Way back on March 23, McKinsey & Company issued its report "Safeguarding our lives and our livelihoods: The imperative of our time," which made it clear that there would be no protecting our livelihoods if we did not first take drastic steps to safeguard our lives. Apparently, Trump did not read that — or any — report, so here we are.

The economic crisis demands that we consider the role of government in our national life, and for some people, this demand is more clamant than others. Many chuckled at the news that among those organizations that had received government loans under the Paycheck Protection Program were Grover Norquist's Americans for Tax Reform and the Ayn Rand Society.

I completely support the right of these organizations to participate in the program, and am glad their employees benefited from that participation. But, wouldn't you think that such participation would cause them to rethink their ideological certitudes? Nope.

"It would be a terrible injustice for pro-capitalists to step aside and leave the funds to those indifferent or actively hostile to capitalism," said Ayn Rand Society board member Harry Binswanger. Injustice is made of sterner stuff.

As Catholics, libertarianism is never an option, indeed, it is the modern ideology most antithetical to Catholic social teaching. Surely those who subscribe to libertarianism have found in the pandemic plenty of reason to reconsider their position, both at the level of values and as a practical matter.

Selfishness writ large results only in more infections, more deaths, and more economic hardship. Only the apparatus of government, with its large and cumbersome bureaucracies, can find ways to confront this complex and multi-faceted problem.

Solidarity — as a value and as a governing methodology — will see us through these crises. That is as apparent as the hypocrisy of small government and libertarian ideologues standing at the government trough waiting for their funds.

That these crises are getting worse in America while in Europe they are ameliorating is a fact so appalling the American people should be reaching for their pitchforks by election day.

Column | The moral stakes of the economic crisis