Ministry is linked to mission 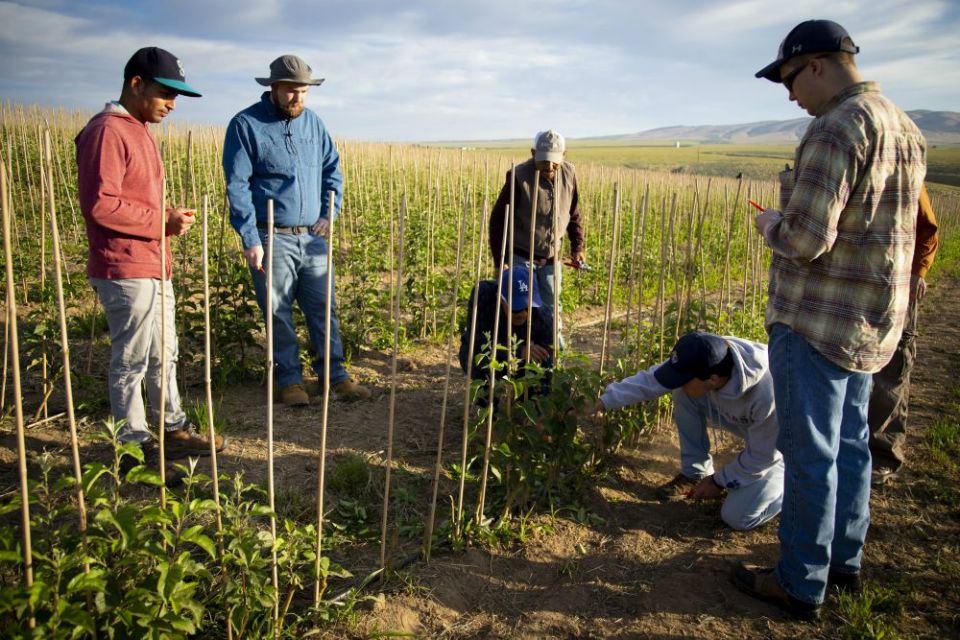 Seminarians learn how to prune young apple trees at an orchard in Prosser, Washington, from a migrant worker May 29 2018,, their first day in a summer migrant ministry program. All seminarians from the Yakima Diocese are required to work in the agricultural fields with migrant laborers as part of their formation. (CNS/Chaz Muth)

The Boston College School of Theology and Ministry has distinguished itself again at sentire cum ecclesia, thinking with the church, about an issue of enormous ecclesial importance, issuing a short, 10-page report entitled "To Serve the People of God: Renewing the Conversation on Priesthood and Ministry." Like the two-way immersion network for Catholic schools run by Boston College's School of Education and their groundbreaking research into Hispanic ministry in parish life, this recent study puts the university's intellectual resources at the service of a pressing need for the church in the United States; in this case: addressing the issue of priestly formation and ministry.

The importance of seminary formation is evident in the pages of NCR. Peter Feuerherd recently reported on the scandal that is Sacred Heart seminary in Detroit, which has become a hotbed of opposition to Pope Francis. Feuerherd also reported recently on Jesuit formation at Boston College, and how that formation actually presages some of the features of this study. And our reporting on many of the discussions surrounding clergy sex abuse all focus, of necessity, in large part on priestly formation, such as Dan Morris-Young's report on a panel at Santa Clara University last October.

So many people send me so many studies these days that I have developed a shortcut for deciding which ones to read: Check the footnotes. If there are plenty of magisterial citations to the documents of Vatican II, to papal encyclicals and theological giants, chances are it is developing out of the tradition, and I read it. If there are a lot of references to Michel Foucault or books that celebrate an ism, or anything with the word "semiotics" in the title, the text is some academic's fantasy, and I don't bother. This study is the former, and what is most notable and welcome is that it starts with a profound reflection on the Trinitarian nature of Catholic anthropology and ecclesiology. It does not start with a list of grievances. It does not start with utilitarian calculations. It is not "pie in the sky" to insist that reflections on Christian ministry start with God's self-revelation in Jesus Christ and the tradition that self-revelation has provoked. It is the thing that keeps the Catholic faith from the gross indignity of being a child of its own age.

And not just any citations but some of the greatest hits of Vatican II. "Christ is now at work in the hearts of men through the energy of His Holy Spirit, arousing not only a desire for the age to come, but by that very fact animating, purifying and strengthening those noble longings too by which the human family makes its life more human and strives to render the whole earth submissive to this goal" (Gaudium et Spes). And "God gathered together as one all those who in faith look upon Jesus as the author of salvation and the source of unity and peace, and established them as the Church that for each and all it may be the visible sacrament of this saving unity" (Lumen Gentium). With these as foundational building blocks, you are never going to build in vain.

The report links ministry to mission, one of the central themes of Vatican II and one to which Pope Francis has brought not only new insights, but to which he is repeatedly giving an example. His daily homilies are worth a dozen encyclicals (excepting Quadragesimo Anno, which is the pearl without price). And the report adopts an unabashedly low presbyteral vision, writing, "Ministers are disciples before they are ministers; they remain disciples even as they engage in ministry." My sacramental theology, like my Christology, is higher than that contained here, but after 25 years of foolishness about the "heroic priesthood," still in the kind of vocations videos in which you see the future clergy at Mass and in the gym but hardly ever serving the poor or interacting with the laity, this report's more horizontal ecclesiology is a useful corrective.

The report looks at key aspects of priestly ministry, specifically preaching, leading worship and prayer, exercising collaborative leadership, publicly representing the church, and practicing pastoral charity. Citing a document from the U.S. bishops' conference, the report states, "For effective preaching, this person of faith must recognize 'the complex social, political and economic forces that are shaping the contemporary world.' This context touches the lives of priests as much as those to whom they preach." Here, I wish they had noted that this was often very true of priests in the first half of the 20th century, too, before Vatican II, when priests really knew their people, even though that was a time when a much higher ecclesiology and conception of priestly identity reigned supreme. God's grace, the starting point always, finds a way to break through no matter what.

The Boston College statement also highlights one of the most important aspects of formation, one in which the process makes a future priest less, not more, ready for parish leadership: Seminaries do not prepare men to collaborate with women. And they need to. "All candidates for ordination must be prepared to work positively and equitably with women, who make up the majority of all lay ecclesial ministers," the report states. Happily, and unlike much that is written on this fraught topic, the statement avoids discussions of relative powers, and instead highlights the common call to service of ordained and non-ordained alike.

Again mindful of the need to serve as a corrective, the text places this emphasis on learning to work with women in the broader context of collaborative leadership. Parishes no longer have four priests, an altar guild and the Knights of Columbus. Now there are many lay ministers at work in the most vibrant parishes, and a priest must encourage and lead them, not resent them or worse. Perhaps, because the focus is on priestly formation, the report's authors did not feel the need to point out that the laity, too, must be willing to collaborate with the ordained ministers. Parish life must be a two-way street, not a one-way street in either direction.

Still, I thought this very down-to-earth treatment of the essential points for formation was well done, and, to check my judgment, I called the smartest bishop I know, Bishop Robert McElroy of San Diego, and he agreed that this section was very well done, and that these five areas of focus "must frame priesthood and formation for the coming generation."

McElroy, however, took issue with the suggestion the report makes that the intellectual formation of future priests take place in a university setting rather than a diocesan seminary setting. "I think that their rejection of the seminary model in favor of a university model is questionable because universities are also isolated cultures," he told me. "I wish there had been more emphasis on rooting seminarians in direct pastoral life during their formation, which the university model does not tend to do any better than the seminary model."

I reject the university's proposal for two additional reasons, one very practical and one more pedagogical. The practical reason is this: Boston College has a 27 percent acceptance rate in its undergraduate programs. I suspect there are seminarians who could not make the cut. And, there are schools like Franciscan University of Steubenville where I would not be confident a seminarian would get a good theological education.

The pedagogical concern is this: The report states, "[Shifting to a university-based education] would also open them to a greater diversity in theologies and convictions than is likely to be common in diocesan seminaries. This diversity can be enriching; it certainly reflects the reality of the church in which the ordained will serve." I don't think those claims are entirely true. There is as much conformity on university campuses these days as there is genuine diversity. And schools of theology are often among the more remote from "the reality of the church," trafficking in trendy ideas and concepts that are creatures of academic culture — and not in a good way — prone to jargon and hyper-specialization.

Conversely, the section on the need for on-going formation is vitally important. And the authors are correct to note that too few bishops make such formation a priority, and priests, burdened with a thousand cares, can often fail to see the necessity of it as well. No one wants to go to a doctor who hasn't read a medical journal since med school. As the report states, "its benefits flow to the whole church."

This document, then, is a useful appetizer for a conversation the church in this country needs desperately — indeed, a conversation the church will always need. I asked McElroy where he would like to see the conversation go next. "I think that the statement would have profited from a reflection on Francis' model of the church as a field hospital, which is so rich in pointing both to the afflictions that lie within each of us and unite us all in our need for healing," he said. "I think a penetrating understanding of the reality of the field hospital is a significant antidote to many of the corrosions that clericalism brings both to priesthood and priestly formation."

I would add my concern that we acknowledge the degree to which the more traditional models of formation contain elements of truth. There will always be a clerical culture. Seminaries will of necessity cultivate a sense of group identity, a fraternal spirit among the ordained, just as enrollment in the army or music school does. We can't hope the ordained will simply blend in with the non-ordained. This document begins the focus on how to confront the pathologies that such cultures almost inevitably create, but it could even go further. I like the policy of Bishop Joseph Tyson of Yakima, Washington: His seminarians do not spend their first few summers ministering to the migrant farm workers. They spend them as farm workers.

Hats off, then, to Boston College for another fine study that will help focus the attention of the church on this pressing need to develop and renew priestly formation. It is the responsibility of the whole church not only to encourage vocations but to nourish and shape them. This report is a useful roadmap to start that work.