Pope Benedict and Pope Francis: free and faithful in Christ 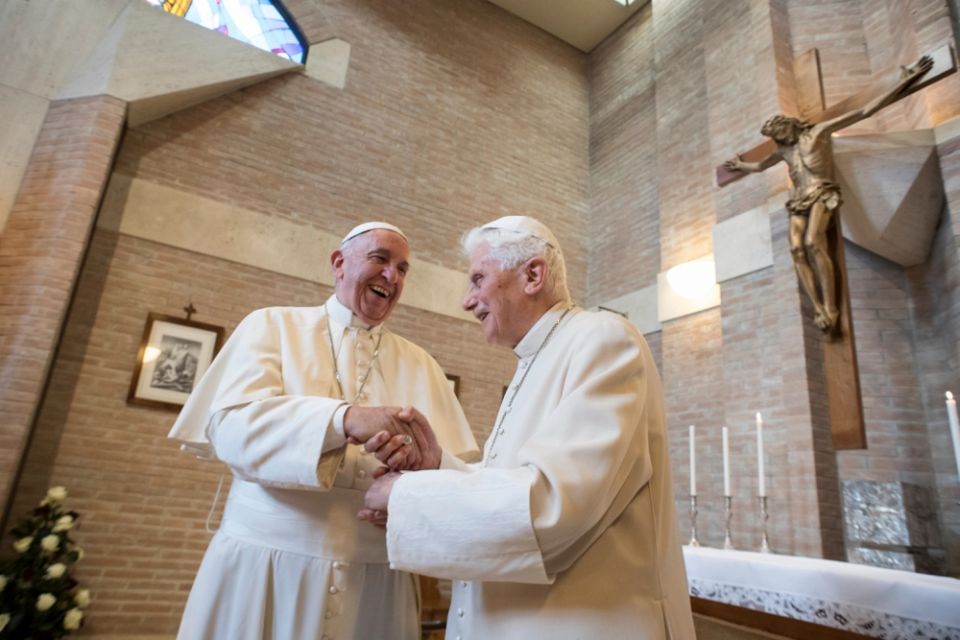 Pope Francis talks with Pope Emeritus Benedict XVI during a visit with new cardinals at the retired pope's residence after a consistory at the Vatican Nov. 19, 2016. (CNS/L'Osservatore Romano, handout)

Last week, I was astonished by Sandro Magister's publication of Pope Emeritus Benedict XVI's preface to a book by Marcello Pera: It was the old Ratzinger at his best. Then, Sunday night, watching "60 Minutes," I was astonished even more by the clips of Pope Francis speaking directly into the camera of filmmaker Wim Wenders. To make sense of both "texts," I would like to look to a third text, remarks recently made by Fr. Tom Rosica when he was given the Touchstone Award by the National Federation of Priests' Councils.

Benedict's preface treats one of the central concerns of his theological writings and of his magisterial statements as pope, how the Christian faith and the ideas that animate the modern West interact with one another. His closing remarks on the positing of a natural order as distinct from the supernatural are enormously important, and we will return to them another day.

But what shines through is not only the subtlety of Benedict's thought but how difficult it is to caricature that thought and, perhaps intentionally on the part of this wily old theologian, how he emphasizes themes that seem more pronounced by his successor than by his predecessor.

For example, and to the gnashing of teeth among the neo-Feeneyites, Benedict places squarely in the first paragraph these words:

The discontinuity between the statements of the popes of the nineteenth century and the new vision that begins with "Pacem in Terris" is evident and on it there has been much discussion. It is also at the heart of the opposition of Lefèbvre and his followers against the Council.

"Discontinuity"? "At the heart of the opposition"? I am dying to see how the integralists of our day will react to this! And not only the integralists. You will recall that no less a figure than Cardinal Daniel DiNardo, president of the U.S. bishops' conference, misquoted Benedict during the 2015 discussion of "Faithful Citizenship" in asserting the need for a "hermeneutic of continuity," even though Benedict actually said that the Second Vatican Council had called for a "hermeneutic of reform" with elements of both continuity and discontinuity, not only the one or the other. Here, now, Benedict states clearly that, in regard to the focus of this book, there is a pronounced discontinuity.

Similarly, when Benedict refers to "the rights and duties of the individual conscience," he surely knows that this theological commonplace for centuries has become a fault line in the contemporary church because of a misreading of Pope John Paul II and a hatred for Francis. Today, in certain conservative circles, an appeal to individual conscience causes an intellectual rash and charges of heretical deviation from the received teaching of the church, even though that received teaching has always recognized the importance of conscience.

Benedict also discusses the central role human rights took on in the teaching of John Paul II. He writes:

I have the impression that, in the Saintly Pope, this was not so much the result of reflection (although this was not lacking in him) as the consequence of practical experience. Against the totalitarian claim of the Marxist state and the ideology on which it was based, he saw in the idea of ​​human rights the concrete weapon capable of limiting the totalitarian character of the state, thus offering the room for freedom necessary not only for the thinking of the individual person, but also and above all for the faith of Christians and for the rights of the Church. The secular image of human rights, according to the formulation given to them in 1948, evidently appeared to him as the rational force contrasting the all-encompassing presumption, ideological and practical, of the state founded on Marxism. And so, as pope, he affirmed the recognition of human rights as a force acknowledged throughout the world by universal reason against dictatorships of every kind.

I find this remarkable because so often we hear critics of Francis complain that his approach to issues is too heavily influenced by his experiences in Argentina. Benedict notes that John Paul II also embraced human rights, even though the secular understanding of rights and the Catholic understanding remain "very distant from each other," for essentially practical reasons, or we might say, pastoral reasons.

Are we approaching the time when we come to terms with the fact that the ministry of the bishop of Rome has changed in ways that may have been necessary at the time but have distorted our ecclesiology? For centuries, Rome played an appellate role in theological disputes, and only in the 19th century did the papacy become more of a protagonist in theological discussion. Now, everyone looks to the Holy See not for confirmation but for direction. It isn't healthy, yet in this centrifugal age, perhaps we need it. If so, let us nonetheless be mindful of the difficulties.

Which brings us to Francis' interview, or at least to the excerpts shown on "60 Minutes." The content is classic Francis: He takes on clericalism, he expounds upon the moral necessity of protecting the environment, and his charm shines through toward the end when he recounts the prayer of St. Thomas More and its request for a good sense of humor. But it is the technique that is arresting: Francis looks straight into the camera as he speaks.

If you have ever done an offsite TV interview, you know how disconcerting, even distracting, it is to do an interview talking directly into a camera. You have to train yourself not to look at the monitor to the right where the image of the person asking the questions can be seen. It is hard to stay personal and passionate because you are talking to a machine.

In the documentary "Pope Francis: A Man of His Word," the filmmaker, Wenders, employs a technique that was first employed by Errol Morris: His own image is projected through a two-way mirror so the subject being interviewed is looking into the questioner's face, even while he is really looking into the camera.

In "The Fog of War," Morris used this technique to get the famously stiff and buttoned-up Robert McNamara to open up emotionally about the decisions he made regarding the Vietnam War, to get past the obfuscations that had so long been used by "the best and the brightest" to justify their misguided decisions. Here, Wenders uses the same technique, and instead of shining a light on what was hidden and false, he shines it on Francis, whose commitment to honesty to the point of brusqueness is famous.

The result? "He is the most fearless person I have ever met," the filmmaker says of the pope. As you watch the clips, who can doubt it?

I turn to Rosica's talk. He spoke of Francis' call in Evangelii Gaudium for a revolution of tenderness, but then goes on to discuss a second revolution. "What he is doing is normal, human, Christian behavior," said Rosica. "Tenderness and normalcy are the revolutions at the heart and the soul of Pope Francis' ministry. It is his unflinching freedom that allows him to do what he does because he is unafraid and totally free to be himself at the same time of being such a faithful son of the Church."

It is almost impossible to overstate the degree to which the culture of the Vatican is a strange culture. Like a military hierarchy, there is an obsession with protocols and forms and authority. The human and the quotidian must wrestle with the divine and the ethereal, the danger of collapsing the one into the other always present, the danger of separating the two always a temptation. Like a royal court, favor and access and patronage play outsized roles, often displacing competence and accountability. Like a whorehouse, the rules governing sexual conduct are strict and produce a distorted, caricatured sense of human happiness and sinfulness.

For Benedict and Francis, in their very different ways, to be able to maintain their freedom, their fearlessness and their normalcy is no small achievement.