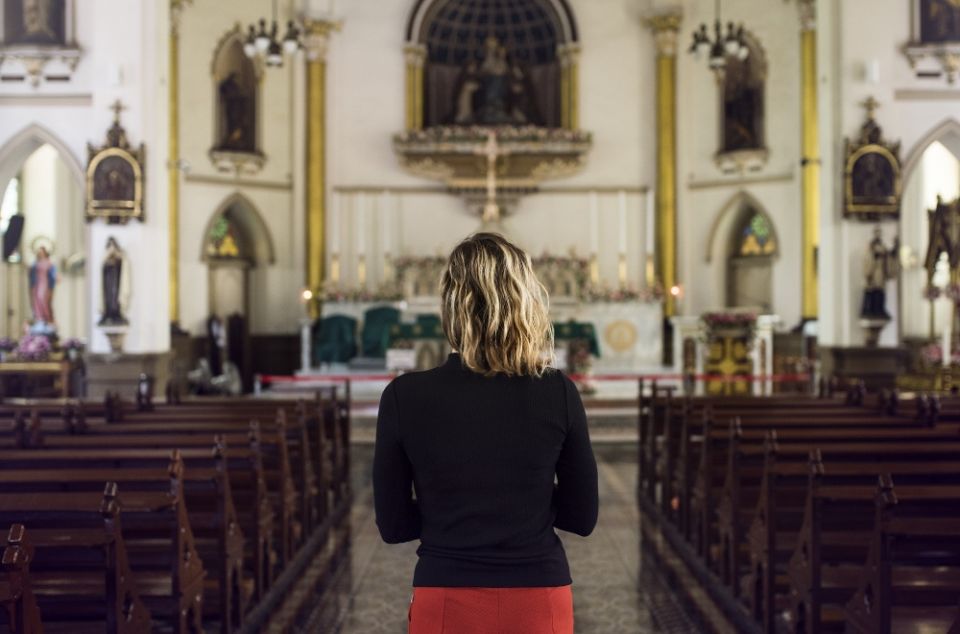 Last week, my colleague Heidi Schlumpf reported on a conference at the University of Notre Dame, aimed at creating "cultures of formation" that will help stem the exodus of young Catholics into the ranks of the "nones." I was especially interested in the keynote address by Bishop Robert Barron, auxiliary bishop of Los Angeles.

Barron began by recalling what then-Cardinal Jorge Bergoglio said at the pre-conclave meetings of the cardinals, about the need for the church to go out to the peripheries, "not simply the economic peripheries, but the existential peripheries as well."

He then recalled Pope Francis' image of the church as a "field hospital," which he saw as a metaphor that presumes a dire spiritual situation where people suffer "life-threatening wounds."

If you bring these two images together, Barron explained, you have "a clear, though rather sobering, account of the present situation of many in the West, especially among the young. Armies of 20- and 30-somethings, and I'd say now even younger, are in rather acute danger and require immediate and substantive treatment, precisely because they've lost their spiritual bearings."

Barron qualifies this dark picture by adding that those who, like himself, have tilled this field of evangelization know that "behind the very questions that even the most aggressively antireligious young people pose is indeed a spiritual longing and fascination."

He cites the depressing sociological conclusions reached by Notre Dame's Christian Smith and his colleagues, and allowed that the situation of "young, former Catholics" — the nones — is "something of an indictment of our educational and catechetical strategies," but that he also believed we are living in a privileged, a "kairos" moment to connect with young people.

The rest of the talk was structured around four findings in Smith's research. The first such finding is that former Catholics still mostly believe in God. Barron warns against seeing this as a source for optimism. The "accounts of God" among these former Catholics who still believe is "superficial" and "we would almost I dare say prefer a robust atheism" because "at least it would give us a little more traction for constructive conversation."

The bishop cites one young woman Smith's team spoke with and reads some of her quotes. He admits they show a spiritual longing of some sort, but they are "juvenile," about a God who is there "to solve our personal problems."

Barron then quotes a young man who admits he prays but is not sure to whom he prays — "maybe the universe, maybe the big white man with the bushy beard." Barron observes the young man appears prone to either "the crudest form of pantheism or the most naive type of anthropomorphism" but, in any event, the idea that "there's a rationally compelling biblical alternative seems not to occur to him."

The second finding Barron considers is that young, former Catholics are "uncomfortable with statements about who or what God is," and that they resist "strong statements made regarding theology."

He suggests this is part of the "relativism that holds sway practically everywhere today." Young people invoke "my truth" but are suspicious of talk about "the truth." He terms this the "culture of 'whatever,' " in which people conclude that what works for me might not work for you, and general statements about religion are viewed with suspicion.

One young person told Smith's team "the essence of spirituality is being comfortable with questions."

Barron notes that these statements intuit something that is a part of the Catholic tradition, "namely, the conviction that no statement about God is ever perfectly adequate." But he confesses his frustration with "this almost complete romanticization of the quest or of the question, especially among the young, goes hand in hand with the relativism just noted." Yet making definitive claims excludes other claims and, citing Jesuit Fr. Bernard Lonergan, is an essential part of knowing.

Barron riffs on Lonergan's four stages of consciousness and intentionality. By getting stuck at the second stage, that on inquiring and understanding, these young people do not enter into the third stage of judging and do not have to risk getting to the final, fourth stage of taking responsibility for their conclusions and acting in a manner that is consistent with what they have come to know and choose. "Name one saint in our tradition who stuck at Level 2?" Barron asks.

He quotes G.K. Chesterton — "An open mind is something like the open mouth, designed to bite down on something solid" — and asserts, "A permanently open mind is not what we're looking for."

The third item from Smith's research that Barron looks at is the observation that young, former Catholics live in "religiously diverse families and friendship networks." He warns against the "uncritical valorization of diversity," a phrase I like and intend to steal.

Barron argues that this disposition to overvalue diversity and undervalue unity represents, in the religious sphere, a complete victory for Kant, as it is linked to the reduction of religion to ethics. This, too, is a concern of mine but Barron does very little with it, instead focusing on how these attitudes result in both "an allergy to anything that smacks of orthodoxy" and the "almost complete subjectification of religion."

The fourth item is that young former Catholics "describe religious faith as illogical or unscientific," which, Barron says, "breaks my heart" and that it is this bias that results in much of the ridicule hurled at religion.

He rightly takes issue with scientism, which, in itself, is witness to the failure of philosophy in the last half of the 20th century, and has been a concern of mine at this blog since its inception. The high-water mark of criticism in regard to scientism* remains my mentor Leon Wieseltier's essay "Crimes Against Humanities," which rebutted Steven Pinker, whose latest book is now a rage, even if its pretensions to completeness have long since been known and exposed. That is a subject for another day.

Or is it? Because if Pinker and his ilk seek to bring science beyond what science's own terms of reference warrant, Barron's presentation displays a similar confusion between apologetics and evangelization. Barron provides a fine set of intellectual arguments for the faith, but is that the problem? And not just arguments, but each time Barron introduced an item from the sociological research undertaken by Smith and his team, he assumes that these young, former Catholics are a problem to be solved.

He makes jokes about their incoherent yearnings but at least those yearnings, however unsophisticated, are authentic. Why poke fun? Is that inviting? Is someone who is alienated from religion likely to warm to the prospect of giving the church a second look when the person "evangelizing" them mocks their questions?

And, what is more, Barron's talk suffers from a lack of self-awareness that is astonishing in itself, and equally astonishing that it is still so common. For all of his erudition, and mindful of my agreement with his core commitment that education in the Catholic faith needs a much more robust intellectual component, how can any bishop talk about the rise of the nones and not stipulate that the failure of the bishops during the clergy sex abuse crisis is probably the single greatest source of disaffiliation from the church in our history?

Young people will never get to the arguments Barron makes so eloquently if they think the church's leaders are morally fraudulent. While someday a bishop may be able to address the rise of the nones without apologizing, again, for the bishops' collective failure to protect the children entrusted to them and their violations of the sacramental understanding of the church that is the hallmark of Catholicism, we are not at that day yet.

The problem extends beyond the issue of clergy sex abuse. Barron's approach, sharp with criticisms of the ambient culture, many of those criticisms warranted — has this approach worked in the past 40 years?

Barron may be more skilled, and more eloquent, than others, but the approach to young people must take account of the way judgmentalism in general turns them off. So while we can provide some obscure philosophic or theological reason to explain why the church considers homosexual acts "intrinsically disordered," where is the humility to admit that such language is pastorally a disaster, and not just when reaching out to gay people?

The approach to young people must recognize that there is nothing new, or alarming, in the fact that people are suspicious of religious leaders in almost every age, not only our own, that before the skepticism of today, there was Elmer Gantry and before Gantry there was Tartuffe, and that this suspicion can save religion as well as question it.

The approach to young people must start with the recognition that after growing up in a culture drowning with consumer messaging, young people crave authenticity above all. It seems to me such authenticity, for the church, must begin with poverty. As mentioned, at the beginning of his talk, Barron recalled Bergoglio's intervention at the pre-conclave meetings, when he said the church must go to the peripheries. Barron added, "not simply the economic peripheries, but the existential peripheries as well." True enough, but in his hourlong address, Barron never once mentioned the economic peripheries.

We must stop passing over the need to be authentically poor en route to some fine, even brilliant, disquisition about intellectual challenges today. St. Teresa of Calcutta demonstrated an authentic concern for the poor that was itself beautiful, and beautiful in ways accessible to all, yet identifiably Christian. Pope Francis has done the same. Unfortunately, many bishops have not.

Francis also is not allergic to self-criticism and calls us all to exercise it. In Amoris Laetitia, he states: "We also need to be humble and realistic, acknowledging that at times the way we present our Christian beliefs and treat other people has helped contribute to today's problematic situation. We need a healthy dose of self-criticism." He was talking about the church's teaching on marriage and the family, but the observation has broader relevance.

I believe with all my heart that the Catholic Church will again find its evangelizing voice. How? Let us give the last word, a word first spoken some 43 years ago, to Blessed Pope Paul VI in Evangelii Nuntiandi:

As we said recently to a group of lay people, "Modern man listens more willingly to witnesses than to teachers, and if he does listen to teachers, it is because they are witnesses." St. Peter expressed this well when he held up the example of a reverent and chaste life that wins over even without a word those who refuse to obey the word. It is therefore primarily by her conduct and by her life that the Church will evangelize the world, in other words, by her living witness of fidelity to the Lord Jesus — the witness of poverty and detachment, of freedom in the face of the powers of this world, in short, the witness of sanctity.

*An earlier version of this column mistakenly said "science" instead of "scientism."