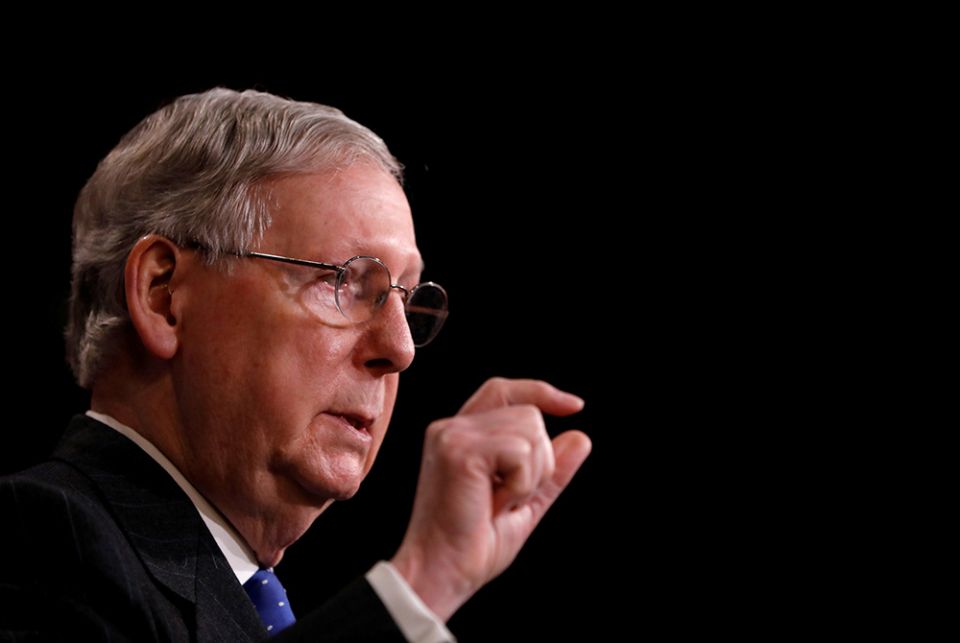 Tomorrow is June 30, the feast of the First Martyrs of the Roman Church. It is also the last day of the month, so many of us will be making sure we have paid our bills. For states and cities across the country, it is the end of the fiscal year. And what a year.

In April, while negotiating a stimulus bill to help confront the economic downturn brought about by the coronavirus pandemic, Senate Majority Leader Mitch McConnell said he was not interested in providing help to states and localities. He said he was not interested in helping states with "solving their pension problems." He suggested they might apply for bankruptcy. Back in April, remember, blue states like Massachusetts, New Jersey and New York were the leading virus hotspots and they do, like many states, have challenges with their pensions. But skilled legislators know how to tailor legislation so that it addresses a particular problem and not others.

We will see if McConnell changes his tune now that some key reelection states for the president and maintaining GOP control of the Senate have become hotspots. In Texas, where Republican Sen. John Cornyn is running for reelection, the COVID-19 infection rate jumped 28% in a week. In South Carolina, where Sen. Lindsey Graham is running for reelection, the infection rate also jumped 28%. Arizona's incumbent Sen. Martha McSally, who lost two years ago but was then appointed to fill the seat vacated by the death of Sen. John McCain, is already trailing in two recent polls by 9 and 15 points. President Donald Trump won the state by only 3.5% points in 2016. Arizona has become the worst hotspot in the country with a 42% spike in the number of new cases. Florida does not have a Senate race this year, but it is the classic swing state, and it is almost impossible to chart a path to 270 electoral college votes for a Republican without winning Florida. The infection rate has jumped 37%. 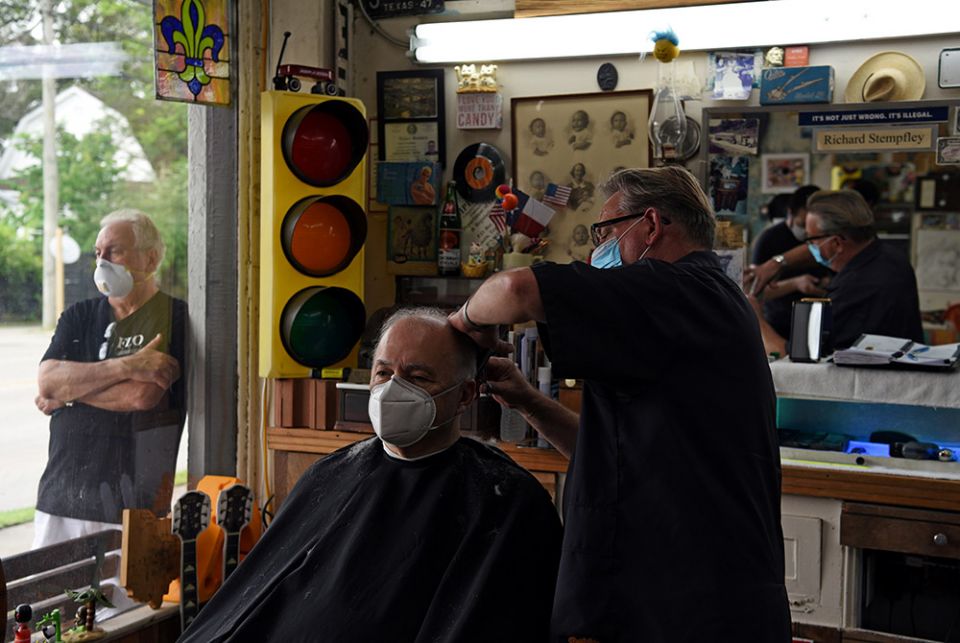 A man in Houston receives a haircut as social distancing guidelines are relaxed May 8 during the coronavirus pandemic. (CNS photo/Callaghan O'Hare, Reuters)

All of these states have seen significant population growth in recent decades. Some, especially Texas and Arizona, have grown due to immigration but all of them have grown because of retirees fleeing colder climates and higher taxes in the Northeast and Midwest. Last week, at The New York Times, Ruy Teixeira documented the enormous shift among older voters from Trump to Joe Biden. Nationwide, Trump trounced Hillary Clinton in 2016 among voters over age 65 by a margin of about 15 percentage points. A Democracy Fund/UCLA Nationscape survey of 108,000 voters indicated that Biden now leads among voters over 65 by six points. That is a 20-point shift, and it will be disproportionately felt in states with higher than average populations of older voters. (Michigan and Pennsylvania also have large older populations, not just the Sun Belt states.)

Older voters are likely to view with especially significant concern the president's repeated indifference to social distancing and wearing masks, his inability to make sure there are sufficient tests for all who need them, and the sheer denialism with which he and Vice President Mike Pence discuss the virus. That concern may turn to disgust.

A disproportionate number of those people who have been on the frontlines in the past few months — nurses in hospitals and the first responders who bring patients there, teachers struggling to switch to online learning, state and municipal workers who have to cope with the enormous onslaught of unemployment claims and the provision of other social services — are employed by our nation's cities, counties and states. Most states do not have the constitutional ability to operate with an unbalanced budget: Only the federal government can do that. Tax revenues at all levels of government will be lower than expected only a few months previously. The case for federal assistance is beyond obvious.

If you want to see society further break down, and the economy tank even worse than it has already, then the federal government should sit on its hands and fail to help the states and cities that administer the very services the pandemic is most straining. 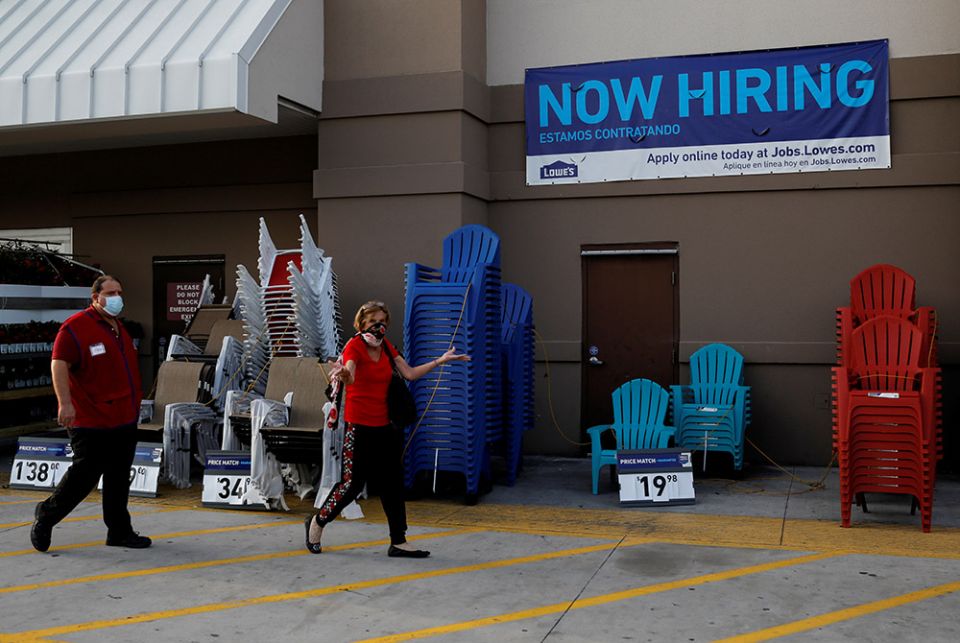 A "Now Hiring" sign is seen at a Lowe's April 17 in Homestead, Florida, during the coronavirus pandemic. (CNS/Marco Bello, Reuters)

For us Catholics, this is not even a difficult issue: Subsidiarity is one of the pillars of Catholic social teaching. Decision-making in society should occur at the lowest level of social organization possible and the highest necessary. That is, if an issue afflicts a family, the family should deal with it, turning to the local community when it needs help. When a community can solve its own problems, it should, without interference from state or federal government, but if a problem requires the intervention of those higher and larger social groups, it should be invoked. It is not federalism, which was crafted to balance interests against each other, hoping the jealousy for power among the different levels of government would serve as a check against any one level becoming tyrannical. Subsidiarity is not Madisonian. The Latin root of the word is subsidium, or help. The different levels of social organization, and different layers of governmental authority, should assist one another in achieving the common good.

You would think that this horrible pandemic would have attuned everyone, even Mitch McConnell, to the need to put the common good of the country ahead of partisan political advantage. When he has opposed aid to state and local governments, that opposition was only lightly based on principle. It was driven by a desire to draw a distinction between high-tax blue states with large pension obligations and low-tax red states with smaller budgets and fewer pension obligations. Public employee unions have also long been a target of conservative activists and politicians. Now that the red states are the ones who will need help, will he change his tune?

The House of Representatives passed the Heroes Act in May and it has been sitting on McConnell's desk ever since. It is time to pass it and to get the much-needed assistance to our state and local governments. This pandemic is a cross we Americans should carry together.