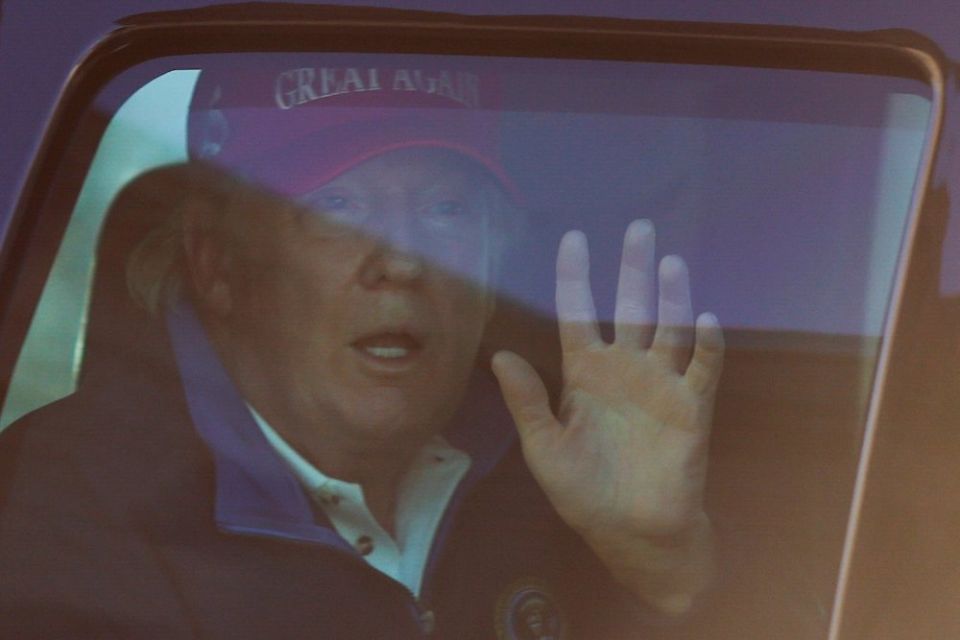 President Donald Trump waves to supporters in Washington Nov. 14, as he drives past Freedom Plaza upon his return from playing golf. (CNS/Reuters/Carlos Barria)

I am not sure how I got on the email list for the Trump-Pence campaign, but I am glad I did. Since President Donald Trump became the first incumbent president to lose reelection in almost 30 years, the emails have been less revealing as political documents than as psychological ones.

On Nov. 10, an email came through with the subject line "Protect the integrity of our election," and the text began, "Michael, The Democrats are trying to STEAL the Election. We will never let them do it. Votes cannot be cast after the Polls are closed!"

That same day, I got another email, evidencing more projection. The subject line was "This is INSANE." Indeed. Oddly, there was no text when you opened the email, just a picture of the president and different dollar amounts you could contribute to the president's legal defense fund. "INSANE" followed by a photo of the president and a request for money. I thought maybe someone was just having fun.

On Nov. 15, I received an email with the subject line "I'm not going anywhere." The text opened, "It's been heartwarming to see all of the tremendous support across the Nation from great American Patriots, like YOU. Organic rallies have been springing up all over the Country in support of yours truly — incredible!"

Sounds like a standard fare form of denial, fixating on something positive — "organic rallies" — that is unrelated to the issue at hand, the election result.

This week, on Nov. 18, an email from the Trump-Pence campaign took a different approach. It included a survey: Who do you think won the election? But, before you got to make your choice, the president told you not to believe "the Fake News Media" or the "Radical Left Democrats" because "I won the election!" Delusional is the clinical term.

Some of the emails are signed by the president, others by his children. I treasured the one from my fellow Catholic Newt Gingrich. Most repeated the warnings that constituted Trump's campaign this year — antifa, socialism, fake news, violence in the streets. Those appeals failed in the court of public opinion, and his challenges to the election are failing in the courts. It is time for a graceful exit, but grace is not in the president's wheel house, and no one can do it for him. He alone can do it.

It would be easy to dismiss this string of emails — and there were dozens more — as the ranting of a lunatic, and so it is. Is anyone really surprised?

What is surprising — and maybe it should not be, but it still surprised me — is the failure by Republican leaders to confront the president's continued effort to undermine the election results. It is one thing to acknowledge he has every legal right to make his case in court, but it is quite another to fail to defend an election from charges it was rigged. The GOP leaders suggest they need to appease him so he will help turn out Republican voters in Georgia when that state has its two runoff elections for the Senate in January, but I wonder if that will work. Does anyone think Trump will be ready to accept the results next week? The week after?

State officials are certifying the election results in their states this week or next. On Dec. 8, each state will finalize the appointment of electors, and they cast their ballots six days later. Those votes will not technically be counted until Jan. 6, the day after the Georgia runoff, but they will not be an epiphany: The slates of electors chosen in December are partisan. Only a fool would think Trump will head to Georgia to campaign for Republican Senators after he has been forced to acknowledge the moniker people like him most abhor — loser!

Republican officeholders, then, really have no excuse for indulging the president's effort to undermine the legitimacy of the election. Still less do any religious leaders have an excuse. Yet, Bishop Michael Sheridan of Colorado Springs took to Twitter to repeat the president's request for prayers as he filed election-related motions at the U.S. Supreme Court. Why would a Catholic want to pray for the success of this half-assed attempt to derail democracy? 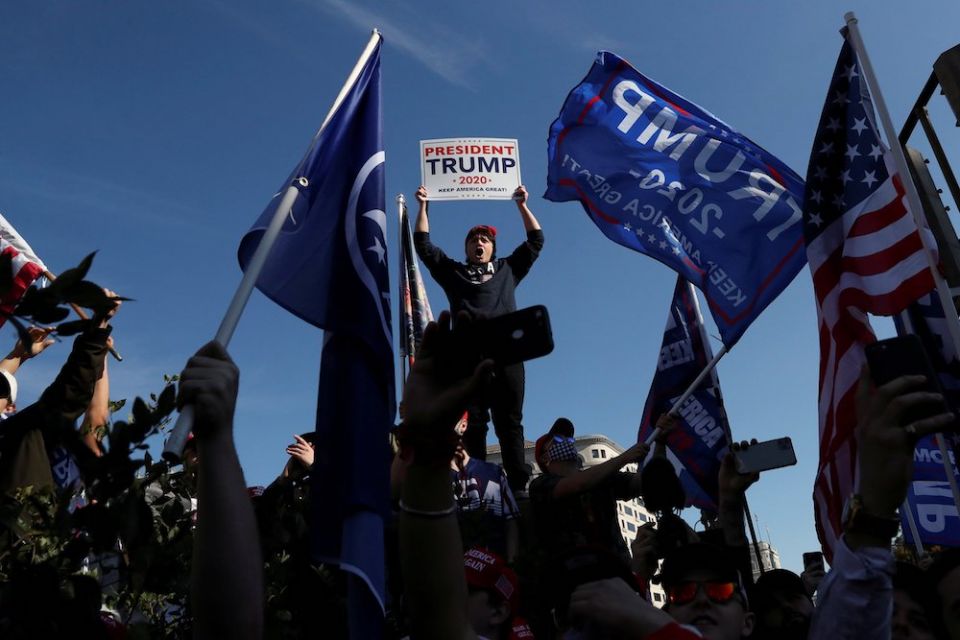 Supporters of President Donald Trump participate in a "Stop the Steal" protest in Washington Nov. 14, after the presidential election was called by the media for Democrat Joe Biden a week earlier. (CNS/Reuters/Leah Millis)

Bishop Joseph Strickland of Tyler, Texas, voiced concern that the U.S. bishops' conference was acting as if the election had been certified when it has not been. "It remains troubling that the USCCB treats the election as certified when it is not & continues to be a source of division." The only "division" Trump's farcical attempt to resist the election result constitutes is between those who swallow conspiracy theories and those who don't. I anticipate a tweet any day now from His Excellency of Tyler announcing he is planning an attack on Comet pizza in Washington because that is the center of the "deep state pedophilia ring," according to QAnon.

I hope these weeks will one day be seen as a sad, but isolated, chapter in the history of American democracy. But who can be sure that Trump's undermining of democracy will not eventually be the first domino, not the last?

We humans do not always grasp the enormity of the challenges we face. This week, I participated in a seminar at the Greenberg Center for the Study of Religion in Public Life. We discussed Laurel Leff's new book Well Worth Saving, which documents the decisions by American universities in the 1930s and '40s to bring, or not bring, scholars threatened by the Nazis to America so they could escape persecution or worse. Most of us grew up learning the rosy side of the story, how the Germans stupidly forced prominent scientists and others into exile, people who ended up helping the Allied war effort or otherwise contributing to Western culture. Leff explores the darker side of the story. She writes:

Well Worth Saving shifts the focus from those who arrived in the United States to those who did not and in the process reveals the crushing choices professors, administrators, foundation officials, and rescue advocates made along the way. It depicts American universities that never fully acknowledged the crisis befalling the global community of scholars nor rose to the challenges the Nazi era presented to intellectual life.

It may be too soon to know the significance of Trump's pathetic putsch attempt. I think he will fail in the short term, but who knows? It is not too soon to conclude that there are plenty of political and religious leaders not named Trump who are failing to acknowledge the crisis he invites, nor are they rising to the challenge he has so profoundly and dangerously presented. Is democracy well worth saving?

Read this next: Thanks, President Trump — I learned a lot from you