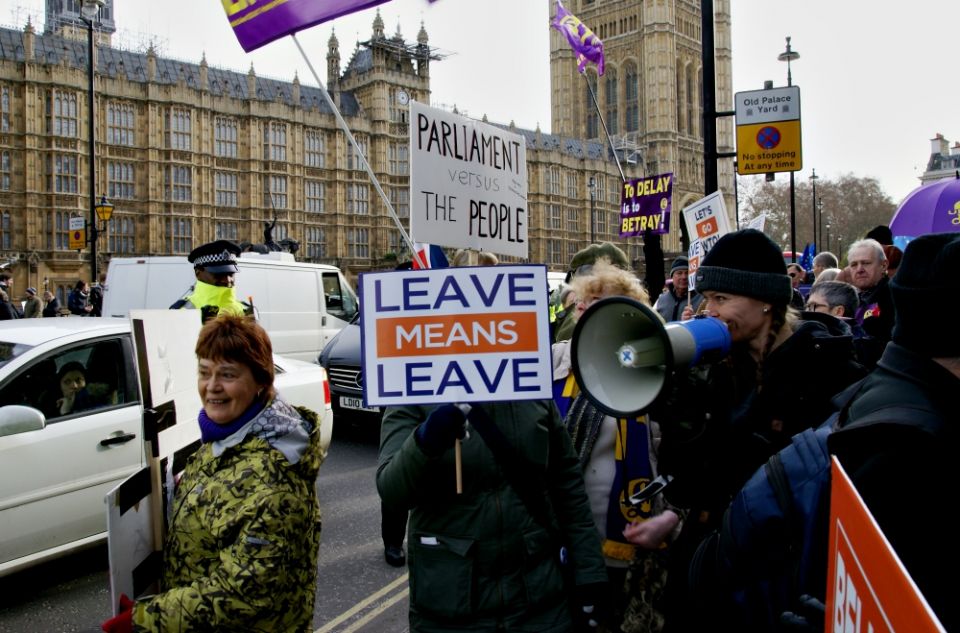 A wise friend wrote to ask if I thought that our political situation here and the Brexit crisis in the United Kingdom do not both reflect a loss of confidence in "elite" political leadership. He asked if wise leadership is possible in a populist world. And implied in these questions is another: Does democracy require some degree of deference to elite opinion?

I have not written about Brexit, the British vote to leave the European Union, in large part because I feel more comfortable discussing English politics of the early 18th century than of the early 21st. But you do not need much in the way of scholarship to recognize the similarities in the way our "two countries separated by a common language" have arrived where they have politically in large part because populist sentiment resented political and cultural elites and latched on to a vehicle for that resentment: Donald Trump's candidacy in the U.S. and Brexit in the U.K.

Ironically, in both countries, populist disgust with the elites took the form of a political challenge, one it is not clear its principal advocates even thought they would win. Many voters wanted to send a signal, but enough of them had the same intent that they rendered a verdict as well. Now they are stuck with the result, and so are the rest of us.

To be clear: Elites squandered the deference they had traditionally enjoyed. Populist blowhards like Trump and Nigel Farage may have ingeminated and focused the aggrieved outrage of the hoi polloi, but it was the elites themselves who made the sense of grievance plausible.

In our country, the Vietnam War was really the first instance of elites lying to the American people to preserve a course of action that was radically wrong, and that claimed almost 60,000 American lives and more than 2 million Vietnamese before its wrongness was so obvious that the elites had to pull the plug. This was followed quickly by Watergate, in which the president turned out to be a crook.

The '70s and '80s also witnessed the rise of special interest groups and the weakening of political parties, creating an increasingly polarized political climate. Ronald Reagan had his Iran-Contra mess and Bill Clinton had Lewinsky. George W. Bush's decision to invade Iraq backfired on him and the nation terribly. Throughout these decades, revisionist history was being undertaken, exposing the dark side of much of America's story.

Deference or even credibility comes about through three channels: tradition, crisis or earned. Traditional deference to elites, rarely strong in America and always suspect, subject to challenge from Jacksonian impulses, did not survive the catalog of lies cited above.

A crisis like the terrorist attacks of 9/11 confers instant deference upon the nation's leaders because we need it: People looked to President Bush because he was that only person to whom they could look. He successfully kept the confidence of a majority of Americans even after no weapons of mass destruction were found in Iraq, and after the war dragged on far longer than promised. It was Katrina that broke the Bush presidency: His cluelessness about what was going on in New Orleans gave people permission to question whether he had a clue about Iraq.

Without a tradition or a crisis, elites must earn whatever deference they expect from the masses, and it is far from clear that that it is even possible to recapture it. Certainly the current media environment, the Twitterification of public discourse, accentuates only the centrifugal, never the centripetal, forces in society.

Our sense of belonging, if it is present at all, is narrowly focused and thinly maintained, with virtual reality and its superficial bonds more common than any sense of communal attachment across lines of race, class or interest. It has been 19 years since Robert Putnam published his book Bowling Alone: The Collapse and Revival of American Community and in those intervening years the collapse has continued and the revival seems ever more distant.

In the current issue of The Tablet, John Milbank argues that both the "genuine horror of Christchurch and the somewhat comic nightmare that is Brexit" are manifestations of a singular crisis, brought on by the shedding of Christian faith at the center of Western culture and politics:

Across Europe, the Christian dimension of the post-war settlement was rapidly thinned out. The more political pronouncements of the second Vatican Council only confirmed this surrender. The children of this settlement understood little of its spiritual dimension: the only values they imbibed were freedom and democracy. Hence their outrage in the 1960s, when they discovered that not everything was permitted. They abandoned not only a Christian horizon but an older socialist one also. Their cultural liberalism quickly and inevitably ushered in the value-free unregulated economic free-for-all that arrived in the 1980s. Mammon came to power with theological and ecclesial complicity, with Christian thinkers often embracing the secular as if it were the will of Providence. In reality, this surrender helped to confirm a secularisation whose triumph was as yet not so certain after all.

I am not in a position to know if Milbank is right about Britain, but in the U.S., the postwar ethos was not so much secular as bastardized Christianity: We baptized Mammon and wrapped our affluence in Christian drag. And Milbank's solution, the retrieval of a politics informed primarily by the ethics of the natural law tradition, seems unlikely.

Last week, I called attention to a manifesto published at First Things that defended the proposition: "There is no returning to the pre-Trump conservative consensus that collapsed in 2016." They started off by correctly denoting the problem with excessive notions of human autonomy, and proclaim their opposition to "the soulless society of individual affluence," although they wrongly attribute such ideas to "lodestar liberalism."

The more serious problem is that they embrace too much of Trump's unchristian worldview. In a passage marked "We stand with the American citizen," they state:

In recent years, some have argued for immigration by saying that working-class Americans are less hard-working, less fertile, in some sense less worthy than potential immigrants. We oppose attempts to displace American citizens. Advancing the common good requires standing with, rather than abandoning, our countrymen. They are our fellow citizens, not interchangeable economic units. And as Americans we owe each other a distinct allegiance and must put each other first.

America's elites may spend a lot more time in the wilderness before they get their bearings and can even think of earning deference from the rest of us. For too long, candidates of both parties made promises they knew they could not keep. The media tackled candidates who made little mistakes or told little lies but let pass the big lies about balancing the budget or "fixing health care."

For all their mistakes, what Milbank and the group of signatories at First Things get right is that most efforts at American and Western renewal come with large heapings of religious inspiration and perhaps our culture is not so secularized that those wellsprings of inspiration are completely inaccessible.

Pope Francis is, for me and for many simple people, precisely the kind of inspiration that we seek and that our civilization needs, and Catholic social teaching remains the most cohesive expression of Christian ethical insights into our common life and the best antidote to any bastardization of the Christian religion.

Already in this election cycle, we have seen Democrats speaking powerfully about how their faith informs their political views. While their ancestors would have accused them of "works righteousness," their words echo with the themes of Catholic social teaching. I hope we hear more of it. It is the only future I can perceive that is not utterly dismal.

Column | In UK and US, political elites squandered deference they once enjoyed