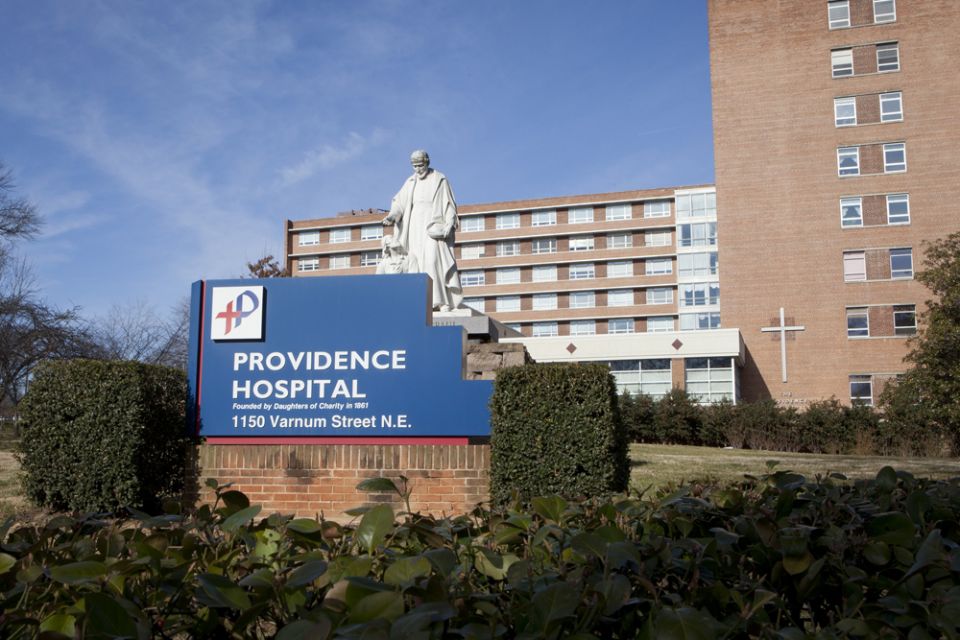 Providence Hospital in Washington, founded by the Daughters of Charity in 1861, is pictured in a Jan. 30, 2012, file photo. (CNS/Nancy Phelan Wiechec)

Last week, Ascension announced that its CEO, Anthony Tersigni, would be retiring at the end of this year, after 15 years at the helm of the organization. In January, three other top executives announced they were leaving the organization, including Patricia Maryland, whom I interviewed for a column about Ascension's decision to shutter Providence Hospital in Washington, D.C., even while paying enormous salaries to Tersigni and other top executives. My column followed reporting here at NCR by Eileen Markey about the closing of Providence Hospital.

I wish Mr. Tersigni and the others well. He certainly will not have to worry about having enough money for his retirement: In recent years he has made between $13 million and $17.6 million every year. As I wrote last November, such exorbitant salaries are shocking and a clear insult to the Catholic identity of the organization he led.

Tersigni undoubtedly displayed leadership qualities at a time the U.S. health care system was undergoing enormous changes. And, I do not entirely fault him for failing to recognize how offensive these large executive compensation packages were. They were not the kind of thing the leadership of the Catholic Church in this country focused on. For example, Tersigni has sat on the board of the National Catholic Bioethics Center, dedicated to "defending the dignity of the human person in health care and the life sciences." This organization keeps on eye on issues like tubal ligations but I see nothing on their website about income inequality although, as major nonprofit corporations, Catholic health care systems are in a position to either contribute to this insult to human dignity or not. I lost a great deal of respect for the organization when it advised Catholic social service providers that they should not become navigators for the Affordable Care Act. The day they announced that decision, I was with a Vatican cardinal who was appalled by it and he was right to be appalled. The National Catholic Bioethics Center, like the U.S. bishops' conference, too often acts like an arm of the Republican Party, indifferent to Catholic social teaching and obsessed with maintaining narrow theological interpretations of complex ethical issues like what does and does not constitute cooperation with evil.

The departure of Tersigni is a good first step towards Ascension and other Catholic health care systems looking at their executive compensation packages, but it is only a first step. The entire health care industry has been put under a kind of Harry Potter spell, convinced, as one bishop told me, that they need a wizard to run them. A similar phenomenon has occurred with college football coaches. But there are no such things as wizards. There is such a thing as Catholic social teaching and it recognizes, properly, that gross inequality is, as Pope Francis has said, the root of all social evil.

We will know if the message is getting through when we find out what Tersigni's successor makes. I am not on the Ascension board, but if I were I would insist that the organization move towards a ratio of highest to lowest paid workers of no more than 25-to-1. To achieve that ratio, I would love to see Catholic health care systems not only lower executive pay but increase frontline worker pay. The Holy See might want to consider requiring Catholic agencies to abide by a reasonable ratio of highest to lowest paid employees.

Daughter of Charity Sr. Carol Keehan, president and CEO of the Catholic Health Association of the United States, and a former CEO at Providence Hospital, is also retiring this year. In the months she has left, and in the search for a successor, I hope that she and her colleagues will make it a priority to focus on this issue. I do not think the leadership at Ascension realized how appalled people would be by their compensation packages. Let that be a spur.

This is also an area where the government should get involved. We confer tax-exempt, nonprofit status on these organizations precisely because they are fulfilling a mission that, in some sense, the for-profit sector is not fulfilling. If they are going to be run like a for-profit enterprise, why not tax them as such? I would also support proposals akin to Sen. Elizabeth Warren's Accountable Capitalism Act, which requires worker representation on corporate boards. This is not only fully in conformity with Catholic social teaching, the idea actually got its start and in Germany was furthered at critical times, by socially conscious Catholics as Matt Mazewski explained at Commonweal.

But let's not wait for the government. Just as we can all be proud that our Catholic hospitals witness to the dignity of human life by making sure that in our maternity wards both patients are always cared for, so too let us witness to the dignity of human work by making sure its rewards are just and proportionate. Just as our hospitals carry on the healing work of Jesus let them carry on the Lord's work for justice too. It is not too much to expect.