V-E Day and Trump: What he refuses to learn explains his failure to lead 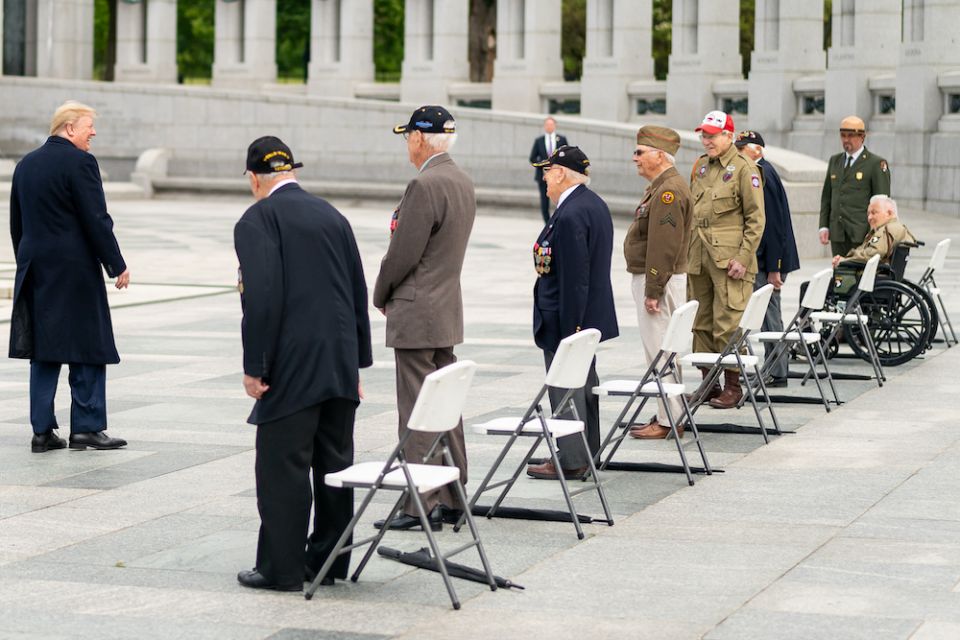 May 8 was the 75th anniversary of the end of the Second World War in Europe, Victory in Europe Day, always easy for me to remember because it was my mother's birthday as well. The occasion called forth a remarkable speech by the president of Germany, Frank-Walter Steinmeier, in which he spoke movingly of how Germany's utter defeat was, in fact, a day of liberation for Germany as for the rest of the world and that only by facing its ugly history has post-war Germany become a beacon of freedom and democracy.

Here in the States, the History Channel marked the occasion by televising several historical series about the war that give us a different version of World War II, one from the point of view of the victors and driven by the advent of significant archival footage. When I finally got a TV in 2005, I could not believe how many versions of televised WWII history there are! My favorite is the early '70s "The World at War" series, which is no more or less accurate than the others, but it was narrated by Laurence Olivier.

No matter which series you watch, the segment on the Battle of Britain and the Blitz is always one of the best episodes. In 1940, the Luftwaffe failed to eliminate the Royal Air Force in the Battle of Britain and so it began the Blitz, the sustained bombing of civilian targets, mostly in London, with the goal of breaking the morale of the British people. Unable to figure out how to force the Channel and conquer Britain as it had Poland, France and the Low Countries, the German high command hoped that fear would spread where their armies could not reach, and resistance to the will of Hitler would collapse.

Of course, the opposite happened, and courage, not fear, proved contagious throughout that long winter in London and throughout Britain. The suffering was immense, and the attacks had the potential to be psychologically destabilizing in that they were both regular and arbitrary, daily yet indiscriminate in their targets. The Blitz unified British people and united them with their government's determination to fight on alone, no matter the odds, which looked very long in the autumn of 1940. British pluck was on full display: "Anyhow, sir," a commissionaire at one of the Service clubs in London was heard to say, "we're in the Final, and it's to be played on the Home Ground." By the end of the following year, of course, Britain was no longer alone.

Democracy depends upon the clash of ideas, the division of the population into parties of the like-minded and the competition amongst varied interests. It is overflowing with centrifugal forces. But, in a time of national crisis, powerful centripetal forces come into play. George H.W. Bush enjoyed record high approval ratings during the Persian Gulf War, and his son, George W. Bush broke Gallup's record in the months after the terrorist attacks of Sept. 11, 2001. Anytime in our nation's history — or in the history of other democracies — moments of national crisis bring the country together.

Until now. Perhaps it is President Donald Trump's ignorance of history that has kept him from recognizing the political opportunity the current crisis has offered him. Perhaps it is that achieving unity among a democratic people requires the kind of hard work required by actual politics — as opposed to a politics of grievance and iconoclasm — familiarity with details and budgets and projections and coalition-building, not mere posturing at a rally of adoring mobs. Perhaps it is the president's evident lack of empathy and narrow emotional range. Perhaps it is some combination of these factors.

I suspect the core reason this crisis has not produced a spirit of national unity, however, resides elsewhere. It is clear that the man who told the 2016 Republican National Convention, "Nobody knows the system better than me, which is why I alone can fix it," did not realize that "the system," when faced with a pandemic, required deferring to people with expertise. He did not realize that thumping his chest about giving the Pentagon more money than it could profitably expend meant underfunding public health resources, and that an aircraft carrier is of no use when fighting a pandemic. Most of all, he did not realize that in a democracy, it is the demos, the people, who must commit to the achievement of national goals, not just the leader. (I had almost written "Duce.") 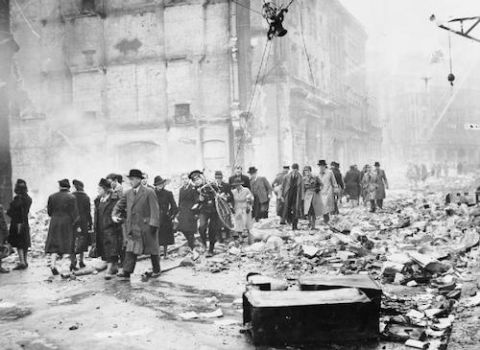 Office workers making their way through debris as they go to work after a heavy air raid on London, circa 1939-1945. (Wikimedia Commons/Ministry of Information Second World War Press Agency Print Collection)

Trump does not avail himself of the greatest asset a democratically elected leader has, the combined will of the people, because he does not know how to unite except by dividing. In this crisis, there is no Hitler, no Tojo to demonize, and his flailing attempts to place President Barack Obama or House Speaker Nancy Pelosi in the role of national threat are unconvincing.

The president underestimates the inner strength of the American people to grapple with this challenge because he does not really know their courage, how they respond to the calling of higher angels, their capacity for empathy and courage and gratitude. He has never much cared for them except as an actor cares for his props. This explains, too, the president's disregard for the law: If it does not serve his purposes, he has no use for it.

Let us return to those World War II series on the History Channel. Whichever series you watch, it is remarkable that none of them ever comment on what seems today — and surely must have occurred at the time — like a disturbing lapse in strategic judgment, which entails an accompanying lapse in moral judgment. If the bombing of civilians in the United Kingdom had not broken the will of the people, why did Allied planners think such bombing would break the will of the German and Japanese people? One suspects that revenge colored their estimation of its efficacy. What is more, the Allied leaders did not face the moral difficulty of killing thousands and tens of thousands of civilians because those killed were not their citizens and constituents. Those threatened by the bombing were the enemy's citizens.

What is most remarkable about the president's cavalier discussion of rising mortality rates due to a premature reopening of the economy is that he is threatening our fellow citizens. Bad enough to look the other way when you are firebombing Germany and Japan in a just war, but how in the world can this man justify imperiling the lives of tens of thousands of American citizens? It is as if Franklin Roosevelt, on the morrow of the Yalta conference, had ordered the firebombing of Detroit, not Dresden, and of Tulsa, not Tokyo. It is inconceivable. It is insanity. It is the World of Donald Trump.

Column | V-E Day and Trump: What he refuses to learn explains his failure to lead

Maggie Paxson converted from war reporting to being a peace correspondent